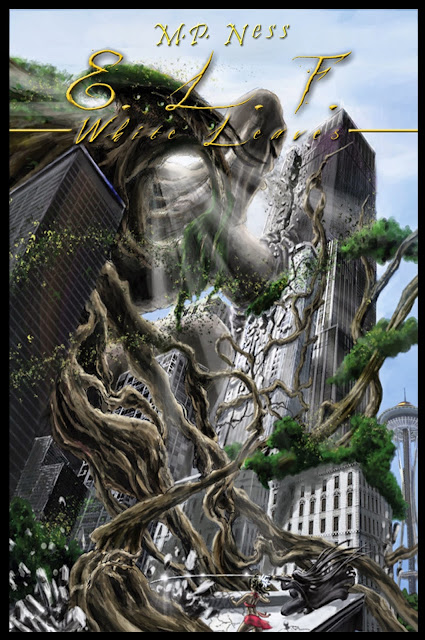 When she opened her eyes again, she found herself looking not on a field of fire and machines. There were no bodies, no agents - nothing but herself in a chair. She was just seven years old. A late evening in the office at Hunter Industry’s yard unfolded before her, looking just as it had more than eleven years ago…

She sat in a high-backed office chair with her back to one cozy armrest and legs dangling over the other, peering rather disinterestedly out a nearby window gone dark with the late hour. Halfheartedly she followed the reflected proceedings behind her without seeming to do so. Below she also studied the many spotlights and headlights of dozens of crews going about their business.

On a far hill in the dark whose trees were yet standing, out where no crew should be working and no road did wander, she thought she saw a new light. It came and went in just a silver flicker, but it was there sure enough.

Her large brown eyes perked up and she studied intently, letting the meeting behind her lose focus as she stared through it to beyond. The image of her father blurred and the darkness prevailed. But the silver light did not come again.

Born in the Midwest, I share my birthday with Leonardo Da Vinci, and seem to share a bit of that creative monster's spirit.

I paint, draw, write, sculpt, and more.
I'm extremely prolific when I don't have life and day-jobs tying me down.

White Leaves is currently available at all major online retailers in both print-paperback and eBook forms.

I do my own cover-art, book-trailers, formatting, and marketing.
It's tough, but a thoroughly engaging ride.