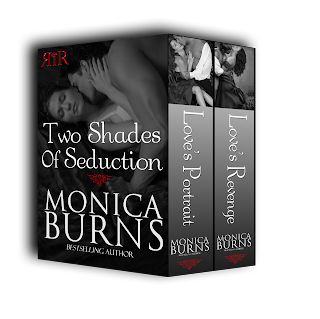 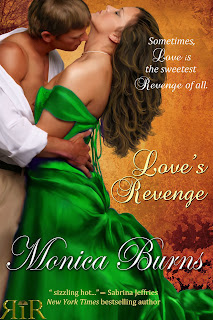 All her life, Sophie's tried to earn her father's love to no avail. Firmly on the shelf at forty-one. Sophie accepts her fate until she impulsively uses her father's criminal activities to escape a life of servitude and right a wrong at the same time. But she never expected the Devil of Devlyn to accept her rash proposal, and she certainly hadn't planned on falling in love with a younger man.

When Sophie Hamilton, the eldest daughter of his worst enemy shows up on the Earl of Devlyn's doorstep with an unexpected offer, Devlyn seizes the chance for vengeance. What he doesn't bargain on is how revenge could cost him the one thing he wants the most. Sophie's love.

“Are you having second thoughts, Miss Hamilton?”


“Most certainly not.” She straightened her spine and tilted her head at a proud angle.


“You don’t appear all that certain.”


“Like you’re afraid I’m going to take a bite out of you.” His wicked smile made Sophie scowl at him.


“You exaggerate, my lord,” she snapped.


The swiftness with which he moved caught her by surprise as he pulled her against him. The scent of sandalwood teased her senses as her face came within inches of his. Hard muscles rippled beneath her palms as the white linen of his shirt grazed her fingertips. Even through her riding habit, she could feel the heat of him warming her body.


Her gaze dropped to the buttons running from the base of his throat downward. What would his bare skin feel like against her hands if she were to unbutton his shirt? His forefinger traced her lips, and she trembled at the intimate touch. Was he going to kiss her? The green eyes staring into hers took on a lazy gleam.


“Exaggeration is for the timid, my dear Miss Hamilton, and I’m far from timid. But be assured of one thing. When I take a bite out of you—and I will take a bite, my sweet,” he murmured in a voice that was like sinful velvet against her skin. “I promise you’ll never forget my doing so.”


The words weren't just an invitation to sin. They held a promise of something she wasn't sure she would survive. Good Lord, if she didn’t take care, this man could easily rule her heart

with just the sound of his voice. His lips brushed over hers in a feathery caress, and she trembled at the touch. She had to do something to restore the balance of power between them.


“And I’m sure you’ll never forget my allowing you to do so, my lord.” Her words brought a laugh to his lips as he eyed her with amusement.


“Should I be worried your given name is Kate as in Shakespeare’s The Taming of the Shrew?”


“I like how eager you are, Sophie. I suggest we dispense with the formalities of an engagement and marry three days from now.”


“I have a feeling you think far too much,” he murmured in a voice that made her breath hitch.


His features blurred as he captured her mouth. Hot like a summer day, his lips singed hers.


The heat of his kiss simmered and melted its way into her limbs, leaving her with a craving for more. An unfamiliar sensation spread its way through her body, igniting a fire inside her that she

didn't know how to quench. No one had ever kissed her like this before. It made her weak at the knees, and she fought to keep her senses from reeling.


Without thinking, she kissed him back. A growl rumbled in his chest. It was a primitive sound that made her lips part slightly, and instantly his tongue swept into her mouth. The taste of

brandy laced its way over her tongue. Although the liquor’s flavor held no fire, it didn't need to.


The way his tongue swirled around hers made up for the lost heat of the brandy. White-heat plundered its way through her veins, and she moaned with delight.


She wanted to sink into him. Mold her body to his and allow him to do whatever he demanded of her. Sweet Lord, this was beyond her wildest, most hedonistic imaginings. She’d never expected to feel so wanton, so eager for a man to take her into his bed. Fear suddenly knifed through her. Restraint. She needed to come to her senses. Desperate to regain control of the situation, she turned her head away from him. Hands splayed across his chest, she pushed against him in an effort to escape. 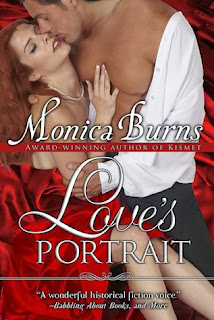 When Julia Westgard commissions a nude portrait of herself, the painting is much more than a rebellious act. It’s an attempt to regain her self-worth after years of a loveless, repressive marriage to her late husband. But the private portrait puts her directly in the path of Morgan St. Claire. A man who doesn't take no for an answer.

From the first moment Morgan sees Julia’s portrait, he’s determined to have her. But the woman he meets is a far cry from the image on canvas. What starts out as a simple exercise in seduction quickly evolves into a quest to reveal the true Julia. With each sensual encounter, he employs every weapon at his disposal in hopes of making Julia see she really is the woman in Love’s Portrait.

Jerking her gaze away from him, she quickly poured herself a cup of tea and took a sip of the scalding beverage. The heat of the tea burned her tongue and she grimaced. An appropriate punishment for her wicked thoughts. The sudden warmth of Morgan’s body sank into hers as he set his cup on the table then leaned into her side.


His male scent flooded her senses as he pulled her cup from her numb fingers. Sweet heaven, why didn't she even offer up a protest? Instead, she was simply allowing him to do as he pleased with her. A hard hand cupped the back of her neck, while his thumb pressed against the pulse beating rapidly on the side of her neck.


“I can always tell when you’re nervous or excited. Your pulse flutters wildly, right here.”


The pad of his thumb caressed the side of her neck in a sensual movement. It teased her skin, causing her heartbeat to increase its pace. “Ah, you see, it skipped again.”


“I don’t think so, my sweet.” His endearment sent a wave of pleasure through her until she reminded herself that the man was well versed in the seduction of women.


“You are far too full of yourself, St. Claire.”


“You called me Morgan the other day.” She breathed in a trace of sandalwood and spice. It was a fragrant aroma. Heady almost. Her pulse lashed out a frantic beat through her body.


He chuckled. “Perhaps you were too angry with me.”


“Only with your stubbornness. I find it quite annoying. In fact, it’s the most irritating thing about you.”


“So you admit I’m not a hopeless cause after all.” There it was again, that teasing note that sent her senses reeling.


“Everyone has a saving grace, even a man such as you.”


“Then tell me what my saving graces are, Julia.” His mouth caressed her earlobe as he whispered his command into her ear. A shudder rippled through her.


“I cannot….cannot think of them at the moment.”


“Not even one?” The warmth of his mouth grazed the point of her jaw line. It shot a volcanic rush of heat through her limbs, leaving behind a languid tranquility in her body.


“No,” she breathed. Oh God, she wanted his kiss. She actually craved it. Insane. She had to be insane. It was the only explanation for why she was experiencing these traitorous emotions. The man was a libertine and she didn't want to be labeled his woman.


“You have a lovely mouth.”


His soft words made her gasp. Inside her head, an alarm screamed shrilly for her to take care or she’d be a St. Claire woman in no time at all. No, that wouldn't happen. She’d see to that, but would it hurt to indulge her senses just a little? No man had ever made her want to break all the rules the way this man did.


How it happened, she wasn't certain, but she was no longer sitting upright. Instead, she was reclining back into the couch with a warm body hovering over hers. Dark brown eyes glittered in his handsome face as a smile of satisfaction curled his lips. There was another emotion there as well. It was passion, rich and earthy in its honesty. It struck a chord in her. Excited her.


Every part of her body tingled with sensation as her gaze remained locked with his. God, but he was mesmerizing. Wetting her dry lips, she trembled at the low growl that rumbled in his chest. He lowered his head and grazed her cheek with his mouth. It was a feathery caress, but it made her blood sing with fire.


In the next moment, his mouth tasted hers. It was a light touch, but it stole her breath away. Oblivious to anything else but his kiss, she sighed softly then kissed him back. He

immediately pressed his lean, hard body against hers, while her fingers splayed across his chest until she could feel the rhythm of his heartbeat. A lethargic warmth oozed its way into every inch of her body, and she breathed in the delicious heat of his scent.


Her fingers spiked through his hair, the softness of it caressing her skin like silk. He tasted heavenly. Hot and male on her tongue as it danced with his. She’d never realized how a woman’s breasts could grow so heavy with desire. The room’s cool air brushed across her leg before a warm hand caressed her calf.


Starting with surprise, she murmured a protest. He raised his head, and stared down into her face. If she had been cold, his heated gaze would have been enough to warm her. His hand stroked her lightly as he studied her.


“That beautiful mouth can deny it, but your body tells me you’re on fire.”


The confidence in his voice barely registered as his hand slid up to stroke the skin above her garter. She swallowed hard. This was far more than just an indulgence of her senses. It was a veritable gate to irresistible decadence. She inhaled a sharp breath as his fingers trailed a path over her inner thigh.


“Have you fantasized about me, Julia?”

A bestselling author of spicy historical and paranormal romance, Monica Burns penned her first short romance story at the age of nine when she selected the pseudonym she uses today. Her historical book awards include the 2011 RT Book Reviews Reviewers Choice Award and the 2012 Gayle Wilson Heart of Excellence Award for Pleasure Me. She is also the recipient of the prestigious paranormal romance award, the 2011 PRISM Best of the Best award for Assassin’s Heart. From the days when she hid her stories from her sisters to her first completed full-length manuscript, she always believed in her dream despite rejections and setbacks. A workaholic wife and mother, Monica believes it’s possible for the good guy to win if they work hard enough.