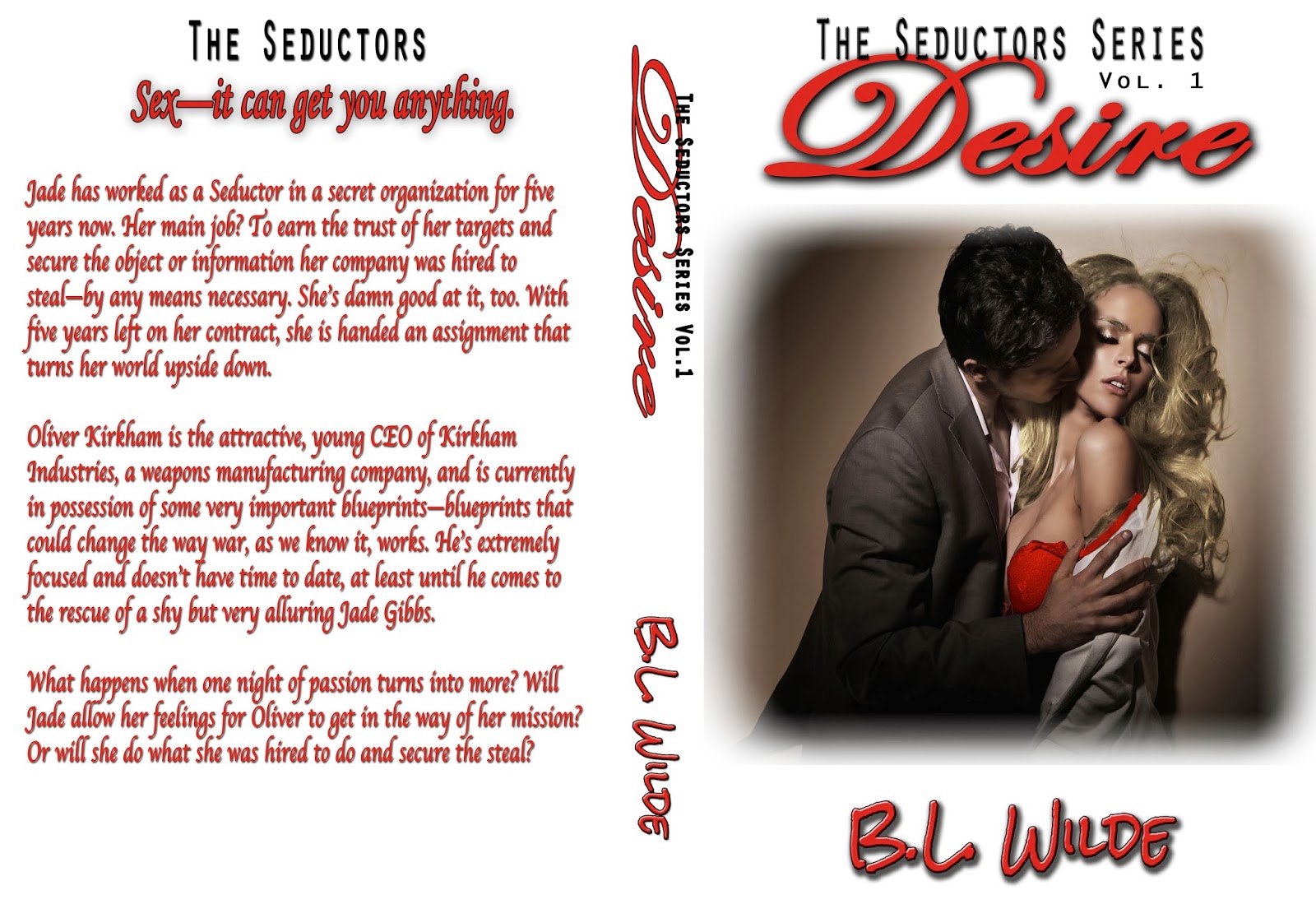 Jade has worked as a Seductor in a secret organization for five years now. Her main job? To earn the trust of her targets and secure the object or information her company was hired to steal—by any means necessary. She’s damn good at it, too. With five years left on her contract, she is handed an assignment that turns her world upside down.

Oliver Kirkham is the attractive, young CEO of Kirkham Industries, a weapons manufacturing company, and is currently in possession of some very important blueprints—blueprints that could change the way war, as we know it, works. He’s extremely focused and doesn’t have time to date, at least until he comes to the rescue of a shy but very alluring Jade Gibbs.

What happens when one night of passion turns into more? Will Jade allow her feelings for Oliver to get in the way of her mission? Or will she do what she was hired to do and secure the steal?

Oliver wined and dined me with style. The conversation followed effortlessly, and a few hours later we were back in the bar having a nightcap.

“I really can’t thank you enough for dinner, Oliver.”

“It was my pleasure, Jade. I’ve enjoyed your companionship immensely tonight.”

“Do you really own your own company?”

“Why do you ask that?” he chuckled into his coffee.

“You’re so young and…fun. I thought CEOs were supposed to be bald with beer bellies, and be too stressed out to even crack a smile.”

“Are those the kind of CEOs you have as your clients?”

“These interior art skills of yours—how much do they cost?”

“Maybe we should take this conversation elsewhere, then?” I suggested, looking around the bar.

“Where did you have in mind?” he asked, moving a little closer, his hand lightly skimming my leg.

“I was thinking of retiring for the night. It’s getting quite late,” I breathed, stretching out to play with his tie.

“Actually, I was kind of hoping for some company,” I whispered timidly, pushing off my stool and slowly walking toward the lobby area. Counting to five, I turned to see Oliver walking toward me, looking dark and dangerously handsome. I was actually looking forward to seeing if this guy was any good in bed.

I pushed the button for the elevator and leaned against the wall just as he caught up with me.

“I hope I’m reading these signs correctly,” he grinned just as the elevator doors opened. With a small grin, I stepped in and pulled him with me. Oliver crashed his lips against mine right as the doors closed behind us.

Kissing was second nature to me. I could fake desire, even if it felt like I was kissing a wet fish, but as Oliver lifted me by my ass and pinned me against the elevator wall, I groaned in actual pleasure. I didn’t have to fake it. Desire flooded through my veins as I ran my hands into his dark hair.

“Christ, you’re beautiful,” he groaned, his lips moving down my neck while his hands began to fumble for the hem of my dress. I was about to start dry humping the guy if he kept on like he was.

“Ugh…” I groaned as his hands worked their way under my dress and he gripped my ass cheeks roughly. “Oliver…ugh…which floor?” He leaned toward the elevator buttons with me still wrapped around him, and pressed a button before quickly returning to attacking my neck.

“I saw you the moment I walked into the bar tonight,” he purred, his hands running slowly down my chest. Both my legs were wrapped around his waist. “And I wanted you.”

“Ugh…I…I’m flattered,” I said, forcing a blush. The elevator opened and Oliver finally let me go. As I slid down his body, I could feel his muscles through his shirt. Mm…it really was going to be a fun few months.

“I want you to know I don’t usually do this sort of thing,” I muttered, playing with the zipper on my purse while he opened his bedroom door.

“Neither do I.” He shook his head as if to clear it from a random thought, and somehow, I didn’t believe him. He was too smooth and confident to have never picked a girl up in a bar before.

“Wow, your room is so much bigger than mine!” I acted awestruck, gazing around as I placed my bag on a table. “Is this just the living area?” I gasped, turning to see that he was suddenly right in front of me. He responded by crashing his lips against mine while backing me against the wall.

“I don’t want to make small talk anymore. I just want to fuck you, Jade,” he growled into my ear. Holy crap! I was so turned on; I could feel the wetness between my legs begin to flow. His hands came back up underneath my dress, but rather than grab my ass like he had in the elevator, he simply pulled my panties down. “Do you want me to fuck you?”

“YES!” It was a plea, because in that moment, I’d never wanted anything more. I heard his belt buckle and the sound of foil before he was suddenly slamming me hard against the wall. Fuck, I’d dreamed of being taken this way, but never once had I thought it would happen. Who was this guy?

“Fuck, yes,” Oliver growled, and with one deep thrust he was inside me.

I’d never been fucked this hard before. I was wanton. I needed everything the guy could give me as he slammed into me over and over again while I was pinned against the wall. “You feel so good,” he panted between thrusts.

“Fuck me harder!” I was totally breaking character, but I’d never had a man bring me to orgasm without my help before, and right now, I needed that moment more than the air I breathed.

“Harder? You better brace yourself then.” Oliver gripped my legs and rotated his hips before pushing deeper and faster inside me.

“Give it to me, Jade. Don’t you fucking dare deny yourself!” Oliver could feel my orgasm begin to take control, so he slid his fingers between us, circling my clit to help ease my release out.

When I did explode, it was earth shattering.

I was still pinned against the wall, held up by his arms as we regulated our breathing. “You see?” Oliver finally spoke. “I knew there was a wild girl in there somewhere.”

B.L. Wilde is a British author obsessed with many things, including heated love stories. Supported fully by her husband, she can often be found at her desk working on her next project.

Her journey into the world of erotica began when she started writing online stories over three years ago, and she hasn't looked back since. 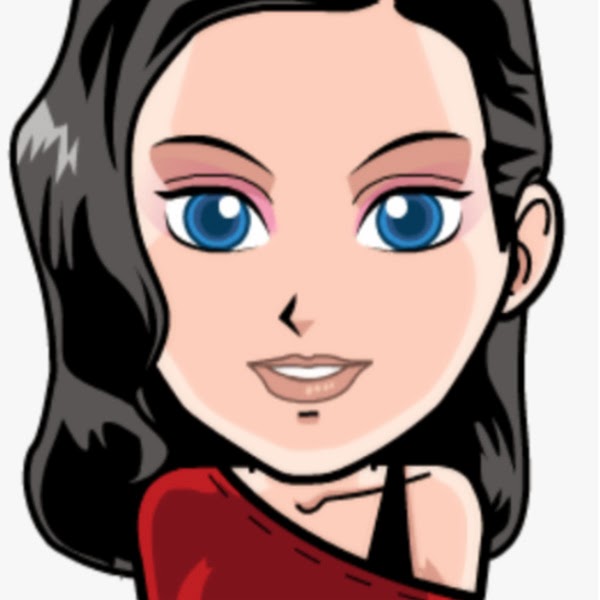 
a Rafflecopter giveaway
Posted by Ashley at 11:00 PM