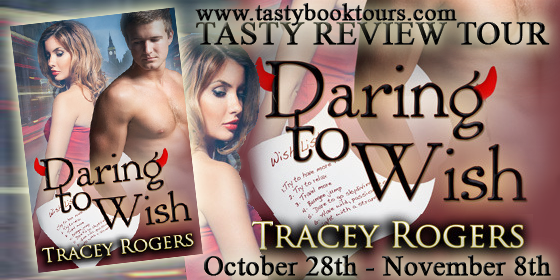 Daring to Wish
By: Tracey Rogers

What happens when you dare to wish?

In an effort to regain her independence and break out of her shell, shy Eve Ward writes a daring wish list of all the things she wants to do before her thirtieth birthday. It’s a good thing the list is for her eyes only, because some of the items are pretty risqué.

Adrenaline junkie Lucas Riley becomes Eve’s “victim” in a kiss-a-stranger dare, and she thinks he’s perfect for her one-night-with-a-stranger wish.

With Eve, Lucas thinks he’s found the distraction he needs before he has to say goodbye to his bad boy image. When he finds Eve’s sexy wish list, he can’t keep himself from giving into temptation and sneaking a peek, and wish number eight is impossible for him to resist. Being good can wait.

Eve is thrilled when, out of the blue, Lucas offers to take her skydiving. Her sexy stranger has helped her tick so many wishes off her secret list. Her confidence has grown and now she’s having fun both in and out of the bedroom. It seems too good to be true...is it? She can’t shake the niggling suspicion that something’s not quite right.

“Wait.”
Eve froze mid-turn, halted by his husky command and the tingle radiating from his hand lightly grasping her wrist. She met his gaze and realized how wrong she’d been. He was a million miles away from being uncomplicated. The startling blue of his eyes revealed depths Eve could only imagine drowning in.
“Did you say…nice?” He leaned closer. “I would say that was a lot better than nice. I’m sure if we tried again we could manage spectacular. Don’t you agree?” he drawled.
Maybe nice had been the wrong word to choose Eve relented as she noted his husky tone. It was infinitely better than nice. Try amazing! Her breath hitched as she thought of his kiss again. Knowing he enjoyed it too sent a surge of pleasure through her that settled deep within her belly. Obviously she could do some things right.
If she intended to fulfill her wishes she was going to have to find some confidence from somewhere—and fast! At the moment her confidence seemed to be firmly in the area of her knickers.
Running and hiding now seemed out of the question. Maybe confidence practice would be the lesser of two evils? She paused before turning to face Mr. Hotness for confidence lesson one.
“Hmm...” She pretended to consider. “Maybe you’re right. However, as this was a dare I’m afraid it was a one time opportunity,” she added with mock apology. “So I guess we’ll never know.”
“You kissed me for a dare?” His brow arched.
Eve nodded. “Uh-huh. My dare was to kiss a stranger.”
“A dare, huh? I feel so…so violated.” He clutched his free hand to his chest in feigned hurt, although his eyes brimmed with humor and a smile tugged at the corner of his delicious mouth.
“Don’t be offended. I did actually choose you,” she blurted before forgetting her cool, calm, and confident aim.
“So you really thought you could violate me then run?”
“That was my plan, yes,” she said with a confidence she didn’t quite feel, especially as she was distracted by the thumb lightly stroking her wrist.
“And I didn’t even try to play hard to get. Guess you got lucky.”
“Or maybe you did,” she countered without thought, mortified as a blush warmed her cheeks at his responding grin.
He grinned, releasing her hand. “Tell me. Do you like to be dared?”
Her eyes widened at the loaded question. “I…I find a challenge hard to resist.”
“Damn good thing I’m a challenge.” 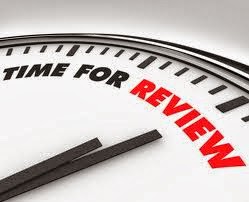 I was given a copy of Daring to Wish for an honest review. When I started reading Daring to Wish I was captivated by the opening. I was drawn in from the very beginning. I love a book that brings me in from the start. It is witty and funny and I loved it! It is written really well and I enjoyed the characters. I loved Lucas Riley. He was great! Eve is a wonderful character and I enjoyed reading this story. I would recommend this to anyone who wants to read a romance book with a bit of excitement too. I am looking forward to more books by Tracey Rogers! I give this book a 4 out of 5 stars!! 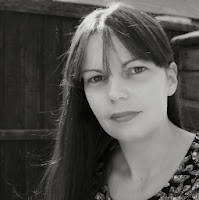 A devourer of books from an early age, I spent much of my childhood stepping into wardrobes, searching for that magical snowy world where conversing with animals would be expected. When I wasn't searching for those worlds, I wrote about them instead. My first step into the world of romance was when I stole sneak peeks into my nana's books. I'm still in that world and refuse to leave.

I live in Staffordshire, UK, with my husband and three wonderful children. An avid reader and writer of romance, I strongly believe that words make the world go around.