Pre-orders for Charming Vengence the second book in the Aether Chronicles series is available for Pre-Order at Barnes and Noble.  It is on sale for $8.99 so order it now and enjoy.  I just pre-ordered my copy and can't wait to receive it.

You can get it for your Nook as well as in regular paperback format.  Barnes and Noble is also offering FREE shipping when you order around $25 in books.  So order now and enjoy both a good book and Free shipping!
Posted by Ashley at 11:26 AM No comments:

Fallen and Never Too Far by Abbi Glines 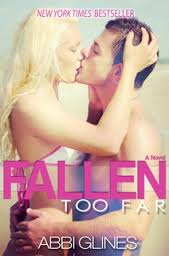 To want what you’re not supposed to have…She is only nineteen.She is his new stepfather’s daughter. She is still naïve and innocent due to spending the last three years taking care of her sick mother. But for twenty-four year old Rush Finlay, she is the only thing that has ever been off limits. His famous father’s guilt money, his mother’s desperation to win his love, and his charm are the three reasons he has never been told no.Blaire Wynn left her small farmhouse in Alabama, after her mother passed away, to move in with her father and his new wife in their sprawling beach house along the Florida gulf coast. She isn’t prepared for the lifestyle change and she knows she’ll never fit into this world. Then there is her sexy stepbrother who her father leaves her with for the summer while he runs off to Paris with his wife. Rush is as spoiled as he is gorgeous. He is also getting under her skin. She knows he is anything but good for her and that he’ll never be faithful to anyone. He is jaded and has secrets Blaire knows she may never uncover but even knowing all of that…Blaire just may have fallen too far 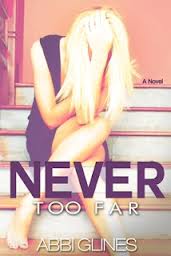 He had held a secret that destroyed her world. Everything she had known was no longer true. Blaire couldn’t stop loving him but she knew she could never forgive him.Now, she was back home and learning to live again. Moving on with life… until something happened to send her world spinning once again. What do you do when the one person you can never trust again is the one that you need to trust so desperately? You lie, hide, avoid, and pray that your sins never find you out.

These were the first contemporary romance books I had ever read and I fell in love with the genre.  I also fell in love with Abbi Glines with these too books and you will see reviews for most of her books on here.

I  read Fallen Too Far back during the holidays and fell in love with all the very dynamic characters in the book (and there are a lot of them).  The story line is amazing, especially Blaire's struggle with her mothers death and fitting in with everybody in the snooty beach front town.  Rush and his struggle with the family secrets and with his sister Nan.  I thought it was an unbelievably well rounded and well written book and then I learned after a cliffhanger ending that I had to wait for the second book!

I read Never Too Far  as soon as it came out in February.  I once again fell in love with the characters, only there were a few new favorites added into the mix.  Woods showed a different side of himself and I fell hard for his character.  He was so worried and concerned it was charming.  Bethy, became another favorite.  She talked Blaire into moving back to Florida, gave her a place to stay and helped her through the initial struggles she had.  Then once again you delve into Blair and Rush's newest struggles and well you just can't help but love them.

This book didn't have a cliffhanger ending but I was so hoping to read more about these characters that I visited Abbi's website to see what she had cooking.  Not only did she have a third book in the mix but she was about to release a book all about Woods.  She also has a book in the process about another character in these books, Grant, if I'm not mistaken.  Needless to say that any book with these books characters are going to be good in my mind and so far she has not proven me wrong.

On a five star scale both books get five stars.
Posted by Ashley at 10:28 PM No comments: 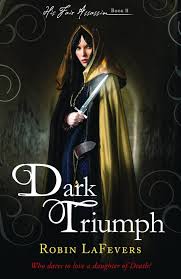 Dark Triumph is book two in the His Fair Assassin series.

Sybella's duty as Death's assassin in 15th-century France forces her return home to the personal hell that she had finally escaped. Love and romance, history and magic, vengeance and salvation converge in this thrilling sequel to Grave Mercy.
Sybella arrives at the convent’s doorstep half mad with grief and despair. Those that serve Death are only too happy to offer her refuge—but at a price. The convent views Sybella, naturally skilled in the arts of both death and seduction, as one of their most dangerous weapons. But those assassin's skills are little comfort when the convent returns her to a life that nearly drove her mad. And while Sybella is a weapon of justice wrought by the god of Death himself, He must give her a reason to live. When she discovers an unexpected ally imprisoned in the dungeons, will a daughter of Death find something other than vengeance to live for?

My review of the book:

This book was amazing.  I liked book number one but I loved this book.  Sybella is a very, very deep  character and she evolves a lot throughout the book.  I loved seeing the battles and struggles she goes through as she journey's away from her past and into her future.    I loved watching her fall in love with an unlikely character and loved how she slowly told her story.  This book was the best YA Novel I have read in a while.

Robin LaFever takes you on a mythical journey through the past and it is amazing.  For all you YA/Historical/Mythology fans out there this is an amazing choice for you.  If you haven't read the first book, Grave Mercy, then you should definitely read them both.  Amazing books!!

On a five star scale it gets five stars.

Posted by Ashley at 9:52 PM No comments:

Hi all, my name is Ashley and I named the site Reading Bliss because reading is bliss for me.  After finishing another GREAT book today I needed a place where I could share all the great books I am able to read.  I will do a separate post for every book I post about.  I will post about any book giveaways that I come across as I sojourn through the book world.  As a library assistant and brand new Kindle Fire owner I have a ton of books on my to read list.  Even if those two things weren't a fact I would still have a ton of books on my to read list.  I have a goodreads.com page so feel free to look me up and see what's on the list of to be read, currently reading and read.  I will be posting this blog on my good reads profile as well as my facebook page.  Some of the posts you will see in the near future are for:

Some of my current reads that will get reviews are:
Daughter of Smoke and Bone by Laini Taylor
Reached by Ally Condie
and
Clockwork Prince by Cassandra Clare

Books are a passion and I want to share the ones I love with every body.  I will read just about anything but my favorite genre is still Young Adult with the new Contemporary Romance being a close second lately.  I do love all things Fantasy/Sci-Fi related and am always looking for more suggestions even if I already have a stack going like I currently do.  I also almost always have a good 4 or 5 books going at the same time.  A few real books (like the three listed above) and several on my Kindle (don't have any until the beginning of May on there right now).

Posted by Ashley at 9:03 PM No comments: