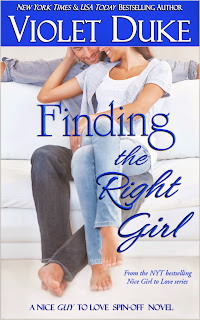 From the New York Times & USA Today bestselling author who brought you the Nice Girl to Love trilogy, comes A Nice GUY to Love spin-off...

Brian Sullivan has been in love twice in his lifetime. He lost his first love to early-onset Huntington’s, and he lost the other more recently…to his brother. And somehow, his heart has managed to heal itself after both. Amazingly, without therapy. That doesn’t mean he hasn’t gotten a bit more cautious, however. Lately, Brian’s been thinking that maybe his brother’s now retired nothing-but-flings rule isn’t such a bad idea after all. Unfortunately, as the unofficial nice guy poster boy, Brian isn’t exactly versed in the fine art of flings. So he looks to the outrageously ‘unique,’ inexplicably enigmatic, provokingly button-pushing Tessa Daniels for a crash course.

There’s absolutely no way he’s falling in love with this one...right?

Tessa has no idea what she was thinking telling Brian that she was some sort of fling expert. She’s never been flung before and she sure as heck doesn’t know where or how to begin flinging a guy like Brian. It was a temporary lapse in sanity—no doubt because of the can’t-help-but-fall-for-him brain fuzz that hits her whenever he’s around. Not only does the man have her being more herself than she’s ever been in her life, but he’s the only person she knows who seems to have as many demons and skeletons in the closet as she does. What’s more, he’s got her thinking of the one thing she stopped letting herself even hope for years ago.

A happily ever after.

For once, Tessa didn't have a snappy comeback for him.  And despite his current state, which was anything but funny, Brian grinned over that as he flicked his tongue out to slide along the seam of her lips in triumph.
But then he nearly bit his own tongue off.
"Why wait?" she whispered, sliding a hand down past his waistband.
He jackknifed upright and flipped her onto the bed, pulling her hand up out of his boxer briefs to pin both of her wrists behind her back, wedged against the mattress.
She wriggled against him.  "You’re always holding my hands down.  Don’t tell me, you have a thing for bondage?" she teased as she tried to escape his grip.
When he couldn’t stop his hips from bucking sharply against hers in response, she stilled and met his gaze.  "Um…do you?  Because if that’s what you’re into, we can uh…"
Holding her wrists in one hand, he clapped the other over her mouth in exasperation.  "Don't you dare finish that sentence.”
Her body stopped squirming finally but there were still the equivalent of floating cartoon question marks in her eyes.
She was going to be the death of him.
“Have I fantasized about bondage?” he rumbled, his voice straining at the seams. “Of course.  What guy wouldn’t want a woman at his sexual mercy for a change?” He let out another silent oath when her eyes sparked with naked, hungry curiosity.  “Do I want to try it with you?  Probably, one day.  It’d be hot as hell.  And if you don’t stop talking, that one day is going to be today.  So for the love of God, stop pushing me before you sentence us to an even longer bout of hot, hard, take-you-six-ways-to-Sunday sex."

National bestselling author Violet Duke is a former professor of English Education who is ecstatic to now be on the other side of the page writing wickedly fun contemporary romance novels.  Besides writing and feeding her book-a-day reading addiction, she can often be found tackling reno projects with her power tools and trying pretty much anything without reading the directions first, or cooking 'special edition' dishes that laugh in the face of recipes.  Violet lives in Hawai'i with her two cute kids and similarly adorable husband.