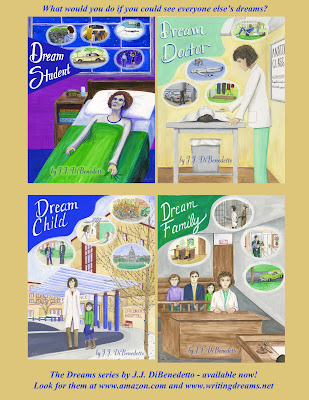 What would you do if you could see other people's dreams?  If you could watch their hidden fantasies and uncover their deepest, darkest secrets...without them ever knowing?

Sara Barnes is about to find out.  She thought that all she had to worry about was final exams, Christmas shopping and deciding whether she likes the cute freshman in the next dorm who's got a crush on her.

But when she starts seeing dreams that aren't hers, she learns more than she ever wanted to know about her friends, her classmates...and a strange, terrifying man whose dreams could get Sara killed.

"Dream Student" is the thrilling first installment of the Dreams series.

"I didn't expect to be woken up by someone I don't know dreaming about killing somebody.  I thought I was done with that once and for all..."

But Sara's not done with it.  As if adjusting to life as a newlywed and starting medical school weren't difficult enough, she's started seeing the dreams of everyone around her, again.  Before everything is said and done, those dreams might destroy Sara's hopes of becoming a doctor, wreck her marriage and even end her life...

"Dream Doctor" is the thrilling second novel in the Dreams series.

"I would give anything to take this away from her.  I would gladly go back to having the nightmares myself - the very worst ones, the ones that had me waking up screaming in a pool of my own vomit - rather than see Lizzie go through this..."

As a resident at Children's Hospital, Sara can handle ninety hour work weeks, fighting to save her young patients from deadly childhood diseases.  But she's about to be faced with a challenge that all her training and experience haven't prepared her for:  her four-year-old daughter has inherited her ability to see other people's dreams...

"Dream Child"  is the suspenseful third novel in the "Dreams" series.

"Why is this so hard for me?  Why am I having so much trouble?  Why do I feel so helpless, so helpless?  What the hell is wrong with me?"

After tangling with murders and mobsters, not to mention medical school and three years of residency, Sara thought she could handle anything.  And then the police show up without warning at her new office and arrest her for a crime she can't possibly have committed.  Sara's confidence, and her grip on reality, is shattered during one terrifying night in jail.

Now, the very dreams that have endangered her life and driven her to the edge of madness may be the only thing that can help Sara find herself again...

"Dream Family" is the powerful fourth novel in the "Dreams" series.

"Oh, God!  We can hurt each other.  Whatever we do to each other in the dream, we'll do it to ourselves for real..."

When her own dreams are visited by a mysterious woman in a red dress, Sara realizes she has something she never expected:  a counterpart, someone outside her family who shares her talent to see other people's dreams.

When the woman in red keeps showing up in other dreams as well, leaving ruined lives in her wake, Sara knows she has something she never imagined:  a nemesis.

Now, Sara must track the woman in red down in the waking world, before she's forced to fight for her life in her dreams...

"Waking Dream" is the exciting fifth novel in the "Dreams" series.

I just thought of something.  Dancing.  I wonder...

"Were you at our Halloween party?"  I've got a feeling he was.  I'll bet he was the tall, cute guy who supposedly kept looking at me the whole time, the one I didn't notice.  He nods.  "And you wanted to dance with me, or at least talk to me, right?"

"By the time I'd talked myself into going up to you, you were gone," he says with an embarrassed smile.

"If it's any consolation, I wouldn't have been very good company.  I was obsessing over a lab report and I snuck back upstairs the minute my roommate took her eyes off me."  It makes me wonder, though.  What could he possibly have seen in me that night that he'd dream about me afterwards?

I realize I may not be the best judge, but I think I was pretty far from the most desirable girl in the room.  If I were a guy, I don't think I would've been interested in me based on that night.  "I'm curious.  Why me?  Out of all the girls who were there that night, I mean."

I don't really expect an answer, but he surprises me.  "You - well, you didn't have this look like all the other girls did, like you couldn't be bothered to talk to some freshman who didn't even have a decent costume for Halloween, you know?"

I don't blame him for being confused; I'm sure he hasn't seen the movie.  It's only because my Mom loves it and watches it every time it comes on that I remember it.  "'Guys and Dolls.'  The movie.  Ever seen it?"  He shakes his head; I was right.  "OK.  So Marlon Brando is the lead.  He's a gambler, kind of a mafia guy.  A big shot, but still basically he's just a crook.  and he's trying to romance Jean Simmons, she's a charity worker, she's with the Salvation Army, OK?"

"Gene Simmons?  From KISS?"  I have to give him credit for feeling relaxed enough to joke.  I guess that's something.

"Jean with a J. From the fifties.  Stay with me, OK?"  He nods.  "So Marlon Brando isn't getting anywhere with her, and he asks her, what kind of man would she go for?  And she says, right away, 'He will not be a gambler.'  But that's not good enough.  It's not really an answer at all.  You see what I mean?"

He laughs.  "So I'm Jean Simmons, whoever she is, and you're Marlon Brando?"

I laugh too, but I'm not letting him off the hook.  "You're avoiding the question."

He takes a deep breath, gathers his thoughts.  "It's hard to explain."

"When I look at you - the Halloween party, or just when you're a couple of tables over at the dining hall, or now.  Whenever I've seen you, you have this quality, I guess it is - I'm not sure if this is the right word, but it's all I can think of - you're open.  Do you know what I mean?"  Actually, I think I do.  But I want to hear him say it, so I shake my head.

"You're open to whoever you're talking to, you're not judging, not looking down on anybody.  You - when I look at you, I can see, you actually care what I'm - what anybody else is saying, what they're thinking.  You're not just sitting there waiting to talk and thinking of something clever to say back.  Like - like I"m - like whoever you're talking to is a real person, and not just someone who's only there because you are.  Do you - do you have any idea how rare that is?"

I do.  And - not to be immodest, but it's one of the things I really like about myself, now I think about it.  If that's truly what he thinks, if he's not just making it all up, trying to come up with whatever answer will satisfy me...

He's not finished.  "And the way you smile - it's genuine, there's something really there, and most people aren't like that.  But you are."

"You keep saying I'm beautiful, but really that's what you mean by it, what you said just now."  I feel a tingling down my spine as I say that.  I think I'm right.  it's not my body, it's not the dress I'm wearing tonight, it goes much deeper than that.  I hope.  I want more than I think I've ever wanted anything in my life to be right about this.

"Yes," he says.  He's staring intently at me now, holding me in place with his eyes.  I can't move, and I don't want to.  "It's your eyes, too.  They're so - so bright."  There's something different in his voice now; the words are coming from somewhere deep inside, someplace that's strong and sure and confident.  It's a place I think maybe he didn't even know he had inside himself until this moment.  "You know that saying, the eyes are the windows of the soul?  Looking at you now, I know it's true.  And that's why."

"Why mine are so bright?"  I can barely get the words out.  Nobody's ever looked at me the way he is now.  Not in twenty-one years.

"Yes."  I don't know how to respond; I suddenly feel warm and a little bit dizzy.  I thought that the moment I first say him was love at first sight, but I was wrong.  That was nothing.  It's now, this moment.  And I don't know what I'm supposed to do... 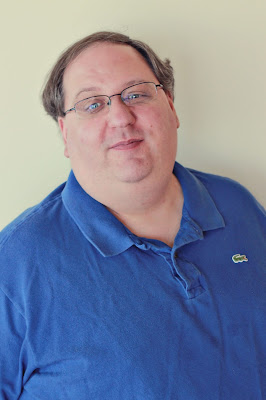 J. J. (James) DiBenedetto was born in Yonkers, New York.  He attended Case Western Reserve University, where as his classmates can attest, he was a complete nerd.  Very little has changed since then.

He currently lives in Arlington, Virginia with his beautiful wife and their cat (who has thoroughly trained them both).  When he's not writing, James works in the direct marketing field, enjoys the opera, photography and the New York Giants, among other interests.

Before I started writing "Dream Student" I didn't really believe it when authors would say that their characters "took over."  But partway through the book, I found out for myself.  Characters really do take on a life of their own, and they do things you never expected or planned for.

Now, with five books written and nearly 500,000 words of Sara's life told, she and her friends and family are almost as real to me as my actual friends and family.  As I write (I've just begun the sixth book in the series), I worry about being true to my characters, not letting them down.  I wonder what they'd think about events of the day, or what they're doing now, in 2013 (the first book is set in 1989-90, and each subsequent book jumps ahead.  As I write book #6, Sara is now up to October of 2001 and her ten-year college reunion).

It's a strange, but wonderful experience to have created something like this.  The Dream Series really is its own unique world.  And it's filled with details that never made it into the books, but help me to make that world more real to the readers.  For example, I know every single class Sara took in college.  I know where Sara and Brian were on December 31, 1999 when the Millennium turned over.  I know about the ugly fight Sara had with the principal of her daughter's school when her daughter started first grade.  And so on.

And when I put my characters into difficult spots, I really feel it.  I lost sleep writing the first four chapters of "Dream Family", describing Sara's arrest, her horrific day in jail, and her breakdown when she comes home.  I felt truly guilty for doing that to her, but at the same time, as I was writing it, it didn't feel as though I was "doing it" to her as much as describing something that actually happened to someone very close and dear to me.

I never expected any of that when I first started writing, and I probably would have scoffed if anyone told me it would happen.  But it did, and I'm grateful.  And I hope that it shows through to my readers.  I hope they can see and feel that I put my heart and soul into these books, and these characters.
Posted by Ashley at 10:00 AM