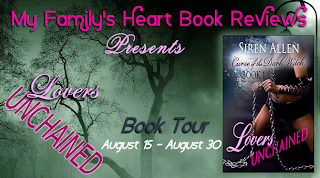 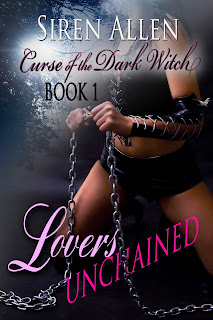 Cursed Demon
Twenty years ago Jude made a huge mistake resulting in him and four of his best friends being cursed by the Dark Witch. For twenty years he has searched for his mate-the only being able to break the curse placed upon him. Until he finds her he will not be able to release the pent up sexual energy that is driving him insane. On his journey to find his mate he is captured and held prisoner by Lana, a vicious vampiress.

A Sex Crazed Vampiress
Lana is intrigued by Jude's ability to resist making love to her. She doesn't know of the curse placed upon him years ago. No matter how hard she tries to seduce him she always fails. His life means nothing to her and she is ready to end his existence, but first she must know what prevents him from succumbing to her seduction. She wonders if it's her or if Jude is like this with all women. To test her theory Lana places one of her female prisoners, Carissa, and Jude together. To her dismay, sparks ignite between the two captives.

A Witch on a Mission
Carissa is searching for her friend who is rumored to have been captured my Lana and her men. She doesn’t plan on finding love but she can’t resist the attraction she feels for her fellow captive, Jude. She senses the desire raging through him and yearns to ease the tension coursing through his muscled body. However, their lust for one another angers Lana and can only lead to one thing…death for both her and Jude.

***
Now that Jude has found his mate he must get them both to safety before Lana destroys them.

Will Jude lose his mate so soon after finding her or will they escape Lana's wrath and form a bond so strong nothing and no one can break it?

Lana straddled him. She ran her hands up his chest.

Jude kept his eyes closed. “Why didn’t you teleport in?”

“I was trying to be polite.” She licked his nipple. Between her legs, she felt his cock jerk and felt his hardness through her leather suit. She wanted him badly; more importantly, she wanted him to want her. He was an obsession she couldn’t get rid of; a puzzle she couldn’t figure out.

Lana ground her sex against his, drawing a moan from both of their throats.

“I have some friends I want you to meet,” she whispered. She pulled back a little and watched for his reaction. Unfortunately, all he did was yawn; he didn’t even open his eyes.

“Aren’t you a little curious as to who I want you to meet?” Once again, he ignored her. His nonchalance only made her want him more. Every time he ignored her, or pretended to not want her, it only made her work harder to please him and make him want her. Every prisoner she owned would give their last breath to have her show them the amount of attention she wasted on Jude.

Lana licked his nipple again. She refused to give up; defeat was not a feeling she was accustomed to. She placed soft kisses from his nipple up to his neck, and then nibbled along his jaw line. She tried to kiss his lips, but he turned his head causing her to kiss his cheek instead. Lana hissed in frustration.

She was tired of playing games with him. When she told her brother about all the problems this slave was giving her, he asked to borrow Jude for a month to train him, but Lana said no. She wanted to be the one to break him. She gave him plenty of chances to give in to her demands. If she couldn’t have him by choice, she would have him by force.

Without warning, Lana teleported Jude to her bedroom, where they landed on her bed; she quickly climbed off of him.

“Handcuff him to the bed,” she said to her servants waiting in the shadows. She was tired of playing nice. It was time for her to be the bitch he thought she was. 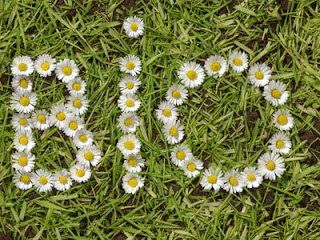 Lana - A Sex Crazed Vampiress
Lana is ruler of the Dark Realm where she imprisons mortals and immortals and treat them all like her pets. Lana is intrigued by Jude’s ability to resist making love to her. She doesn’t know of the curse placed upon him years ago. No matter how hard she tries to seduce him she always fails. His life means nothing to her and she is ready to end his existence, but first she must know what prevents him from succumbing to her seduction. She wonders if it’s her or if Jude is like this with all women. To test her theory Lana places one of her female prisoners, Carissa, and Jude together. To her dismay, sparks ignite between the two captives.

Faede – Witch/Chameleon
Faede is a witch of the silver coven but is also part chameleon and can blend in with her surroundings. She has the ability to see the future in her dreams but only bits and pieces. During one dream she sees her mate and that he is being held prisoner in the Dark Realm. Even though her coven is in turmoil she knows she must travel to the Dark Realm to find the man of her dreams, Bruce.


Cole – A cursed Vampire
Like Jude, Cole was also cursed by the Dark Witch. He can drink all the blood in the world but will never fill full until he finds his mate. Essentially he is slowly starving to death. The only thing that keeps him sane is sex. It calms the thirst that burns at the back of his throat.

I love to travel, preferably with my husband, so he can do all of the driving. I enjoy time with my family, who are just as silly as I am. I have no children…yet, wish me luck! My hobbies are reading, writing and shopping, though I hate trying on clothing. If I wasn’t a writer or a Laboratory Professional, I would probably be a Secret Agent. But that’s the beauty of being a writer; you can create your own world and be whoever you want to be. In my imaginary world, I am Queen and my siblings are my minions. 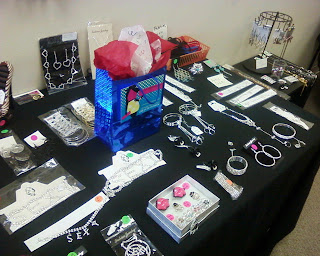 a rafflecopter giveaway
Posted by Ashley at 11:25 PM