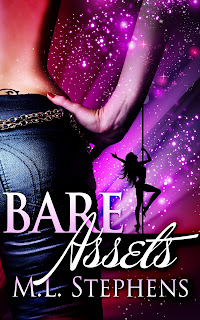 With nothing but shattered dreams and a busted heart to fuel the way, Angela Fletcher drove out of Arkansas and never looked back.

Six years later, the new and improved version of the girl she used to be steered clear of romance, love and late night promises. The only pillow talk Angela engaged in these days, was making sure the person on the other pillow knew to lose her number as soon as he left the bed. She only had room for one love in her life and that was Bare Assets, the gentleman's club she poured her heart and soul into.

Dean Murray was the devil in disguise and had left behind enough broken hearted women to populate a small country. Angela would know. She was an expert markswoman who was skillfully self-trained at shooting down the good, the bad and the ugly of all masculine targets. After all, as the owner of the most successful strip club in Dallas, Texas, it was her business to know men.

Just as she begins to fall for Dean's silky words and passionate ways, her past and present unexpectedly collide and a meticulously planned future turns into unpredictable chaos. Is the smooth talking, denim wearing devil responsible for the chaos? Or have the secrets she left buried in Arkansas, coming back to haunt her?

The small town girl from Arkansas had worked her ass off to turn Bare Assets into the five star rated gentlemen's club it currently was. It had taken an Olympic sized swimming pool full of sweat and tears, along with countless hours and sleepless nights, but she never had to worry about losing her job or pissing off the boss man. Angela Fletcher was the boss man…or boss lady if you will. Scratch that. She was not a lady. She was a certified, hard-nosed bitch, but that's what it took to make it in an industry saturated with chauvinistic pricks.

Besides my obvious love for coffee and all things caffeinated, I love to travel. The occasional tourist stop is fun, but I'm a back road kind of gal. Take me off the beaten path. I want to meet the ordinary people behind the culture.

My crazy family includes a husband, four kids, two grandbabies, two dogs and a cat. That's right. Life is totally insane, and so I write.

Speaking of writing, I've been spinning stories around the campfire since I can remember. Poetry was second nature and as a teen and young adult, short stories were constantly being penned. I'm an avid reader who loves almost all genres. Let's face it! A good read is a good read, regardless of whether it takes place in the future, the present, the past or with ghosts.