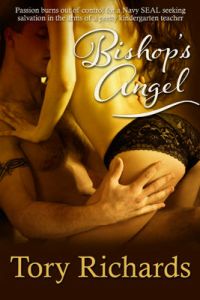 After ten years of sacrificing everything for his country as a Navy SEAL, Bishop is looking for salvation, and something more permanent in his life. Angel, a pretty kindergarten teacher, thinks she's just what he needs. Their chemistry is instant, and explosive, only Bishop has trouble letting go of his commitment to his country. It's up to Angel to prove there's room for her in his life.

“The police are on the way, ma’am. Where is the intruder now?” the operator asked.

Angel listened for a moment. “He’s still in the kitchen.”

“Is the intruder male?”

“No, no!” Angel said, and then quickly lowered her voice when she realized she’d spoken too loud. “I don’t know if it’s a woman or a man.” She’d been too afraid to look when she had the chance. Movement coming from the kitchen told her the intruder was still there, but for how long? She was crouched at the end of the couch, too afraid to turn around, frightened that at any moment she would be discovered. “Please hurry!”

“They’re on their way. Stay calm and—”

“I think he’s in the room with me!” Angel’s eyes rounded with fear when she sensed someone moving up behind her.

Angel knew the intruder was behind her now. She stood up, whipped around and slammed her phone into the side of his head with a piercing scream. All she could make out was a tall, dark outline.

“What the fuck—” a male voice boomed.

Angel let out another scream and slammed her hands against a massive chest, shoving him away from her as hard as she could. Her only thought was making it back upstairs to the safety of her room until the police arrived, but the second her palms landed on the man’s rock-hard chest she knew she was in trouble. He stumbled back but she had a feeling it was due more to her catching him by surprise than the force of her push.

She scooted around him but suddenly his hands were on her, and for a moment they struggled against each other. Angel was hyped up on adrenaline and a strong sense of survival, and she used her nails and teeth on the naked arms and powerful hands trying to subdue her. It gained her enough freedom to make it to the stairs but halfway up she found her ankle being grabbed, she fell, and then she was pinned beneath a heavy weight.

“No!” she cried out, struggling wildly against him. But she was no match for his superior strength and the honed muscles she felt beneath her hands. In no time his hands had wrapped around her wrists, and she was pinned against the stairs.

“Who the hell are you?” he demanded, his face too close to hers.

“Who the hell are you?” Angel demanded right back, twisting beneath him. It was then she felt cool air in places that she shouldn’t, reminding her that all she had on was a thin night-shirt and a pair of bikini panties. Judging by the super hard pecks she felt pressed against her breasts, her shirt had come undone, too. An insane thought crossed her mind, why he wasn’t wearing a shirt. She wiggled wildly, unintentionally scraping her nipples across his flesh.

“Stop before you get hurt!” he growled. In an effort to subdue her he pressed his body against hers.

“Then get off me!” Angel hissed, arching her body in an effort to throw him off her. His muscled thighs and powerful legs flexed against hers, easily holding hers still.

“Not until you tell me who you are,” he grated in a rough voice.

His warm breath slapped her in the face. “I live here,” Angel said without hesitation, glaring up into his shadowed face. She was aware there was no way he could see her because it was too dark.

How did he know that? “The police are on their way so I suggest you let me up and get out of here.” Her energy was beginning to wane. He was too strong and big, and the longer they remained like that, the more she began to feel uncomfortable with their intimate proximity.

“Good. Then we can get to the bottom of this.”

That wasn’t the kind of response an intruder would make if he were caught in someone else’s house. Maybe he was delusional or something. Angel decided to switch tactics. “These stairs are hurting me,” she said weakly.

Things grew still between them and she sensed his silent contemplation, as if he were wondering if he should believe her. She whimpered a little for good measure.

“Okay, I’m going to let you up, but don’t try anything stupid,” he warned.

The second he released her and lifted off her body, Angel got to her feet and dashed the rest of the way up the stairs.

“Son of a bitch!” he cursed behind her.

Angel slammed and locked her bedroom door in his face. She didn’t know what she hoped to accomplish, except to get away from him until the police arrived. What was taking them so long? She ran to one of the windows and opened it. Maybe she could push out a screen and—

Without warning her bedroom door was kicked in. She screamed and made a beeline for her connecting bathroom.

A muscular arm wrapped around Angel’s waist and she was lifted off her feet. “Let me go!” She wiggled and kicked, very much aware that her butt was against a very intimate part of his body. Burning heat replaced the fear flowing through her blood because his cock wasn’t as flaccid as it should have been.

“Look,” he slammed her down onto the bed and for the second time she found herself pinned beneath his superior strength. “Before this goes any further I think we need to talk.”

“You can talk to the police,” she panted, twisting beneath him.

“I intend to,” he said without hesitation. There was a confidence in his tone that surprised her.

Without warning he reached up and turned on the reading light at the head of the bed. How did he know that was there? Meeting eyes the color of blue topaz, everything in Angel froze, including her breath. Oh God, I know those eyes! She didn’t know the man personally, but she knew of him from the pictures on the fireplace mantle downstairs. He was Diana’s older brother, and Navy SEAL Bishop Strong. Suddenly everything made perfect sense.

Tory likes to travel. She likes sweet iced tea, good coffee, and any kind of sandwich. A couple years ago she retired from the happiest place on earth, Disney, and moved in with her daughter, son-in-law, and grandchildren. These days she spends her time with family, friends, her four cats, and writing. Email her at tory.richards@yahoo.com; she loves to hear from readers.