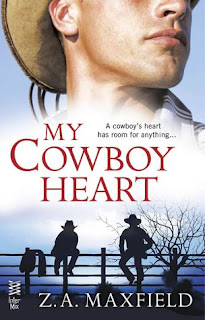 A cowboy's heart has room for anything…

J-Bar ranch foreman Malloy pretty much keeps to himself—slinking around the edges of everybody else like an old coyote, doing his job and staying private. That is until Crispin Carrasco shows up.

Lean, muscular, and with a motor mouth that won’t quit, Crispin sparks something in Malloy—something the foreman didn’t know was there. But how does a lone coyote approach the warmth of a fire? And more important, what would happen if that fire burned? 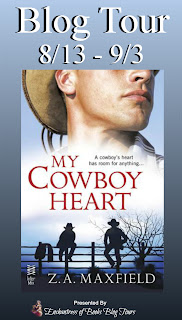 Z. A. Maxfield started writing in 2007 on a dare from her children and never looked back.  Pathologically disorganized, and perennially optimistic, she writes as much as she can, reads as much as she dares, and enjoys her time with family and friends.  If anyone asks her how a wife and mother of four manages to find time for a writing career, she’ll answer, “It’s amazing what you can accomplish if you give up housework.”

Her published books include Crossing Borders, Drawn Together, and the St. Nacho’s and Brothers Grime series from Loose Id, ePistols at Dawn and The Pharaoh’s Concubine from Samhain Publishing, and Notturno, Vigil, Stirring Up Trouble, and All Stirred Up from MLR Press.