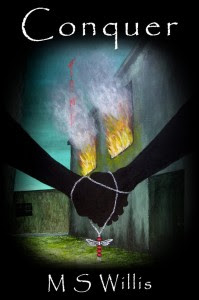 Conquer is the third book in the Control series. This description contains spoilers for those who have not read books one and two in the series, entitled Control and Conflict.

Private Investigator, Paige Stone’s world was shattered when she learned truths about her past. Following her discovery, Paige is forced into a situation where she needs to accept that, although a person can control their mind and body, the circumstances of their lives are far outside their grasp. As Paige struggles with coming to terms about events in her life, she is also put through the harrowing task of learning when to fight and when to let go.

Strong-willed and arrogant, Daemon Pierce agrees to help Paige on her hunt for Chris. As Daemon instructs her how to fight with both body and mind, he breaks down the final walls she has built around her heart.

~~~~~~~~~~~~~~~~~~~~~~~~~~~~~~~~~~~~~~~~~
M.S. Willis is a romance novelist whose debut novel, Control, was released in 2013.  Although currently writing in the romance genre, Willis has plans to expand her literary pursuits into multiple genres and has no fear conquering difficult subject matters in her writing.  Willis is a native Floridian who is also a photographer and musician.  When not absorbing herself in written, visual or musical expression, Willis is an adrenaline junkie, a ‘closet’ video game enthusiast, and an avid outdoors person and nature lover.
Visit M.S. Willis on her author page:  www.facebook.com/mswillisbooks
Find her on GoodReads here:  www.goodreads.com/book/show/17912005-control
Posted by Ashley at 8:00 AM