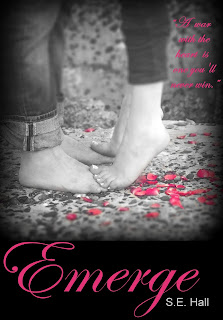 Emerge is Laney Walker's story; an 18 year old quick witted, athletic, southern girl who lets few get too
close and uses her sarcastic zingers to deflect most situations.  This is her coming of age journey...starting at a new college, with a new softball team and a quirky roommate, all while living in a co-ed dorm.

It changes all which she thought she knew and awakens something, someone, within her that she didn't know existed.

This party is actually pretty fun and I like almost everyone here.  Kaitlyn has obviously nominated herself the non-designated driver.  She's chugging drinks down and flirting with every guy here, including Evan.  I'm happy just sitting on my bale by the fire actually giggling a bit at her, when Matt Davis quickly slides in the empty spot Evan left in search of some non-barley based drinks for us.

"You don't owe me anything, but I'm flattered you consider it an honor," I retort, with a snap in my voice.  I"m not oblivious to the fact that Matt has always had a "thing" for me, one I do not reciprocate.  I've often wondered if he's the culprit behind the creepy notes, but he's had an alibi on too many occurrences.

"No thanks, Matt.  How are you getting home tonight?"  He's not a completely bad guy and I for sure don't want to see him hurt.

"That's okay; you can still give me a ride."

Oh, isn't he clever?  His drunken innuendo doesn't warrant a response and it's not the right time for Evan to walk up, I assure you.  Matt's legs are dangling in the air before I even register it completely, as he's lifted by his shirt collar in one of Evan's huge hands.

"You've got five seconds to apologize to the lady," Evan growls.

"Evan, it was no big deal.  Just a drunk comment by a boy scorned.  Why are you stressing over it?"

"I can't stand the way he talks to you.  Not to mention, he's always staring at you and talking about you; he's obsessed.  I don't like it one damn bit, I"m on to him.  If I find out he's the one stalking you..."  He runs his hand through his hair and blows out a breath.  "I'll kill him."

The silence seems to go on forever, but Evan needs a minute to calm down and I don't dare chance saying the wrong thing right now.

"And the first guy brave enough to hit on you, and that's how he goes about it?"

"What does that mean?  Brave enough to hit on me?"

"You really have no idea, do you?"

I just stare at him, my expression reminiscent of my "trying to solve quadratic equations" face.

He sighs and cast his eyes down.  "Laney, you're that girl.  The one guys make up in their head when they put all the best parts together to make one perfect girl.  The man who gets you to actually pay attention, well, he'll be the luckiest guy on the planet, and he'll know it.  All that, and the fact that you never date, is pretty damn intimidating."

There's a flutter in my chest; does he mean I'm the perfect girl made in his head?  Is he intimidated by me?

He moves closer now, I can feel the heat coming off his body.  Yes, Evan, find the courage.  And then his hand is cupping my cheek, and I instinctively lean in to it, a little gasp of air escaping my lips.

I've never imagined this with Evan, it's never occurred to me to even dare hope what he felt for me was more than a protective best friend.  Good thing, I would have done the fantasy no justice.  His thumb brushes my bottom lip and I realize...I could be swinging a bat, casting a reel, and driving a truck all at the same time, but I'm still 100% woman.

I think I speak out loud.  "Are you intimidated, Evan?"

He leans over, touching his forehead to mine as he takes a deep breath.  His nose brushes along mine, his whisper on my lips.  "Not anymore, I"m done with that, and I'm done not kissing you.  All you have to do is say no, precious girl.  But please, please...just say yes."

As I whisper "yes," his mouth takes mine.  His lips are soft and gentle, sending a sizzle throughout me.  His hand glides from my cheek to the hair behind my ear, stroking it slowly, over and over again.  He breaks contact to lean back slightly, meeting my eyes, and a whiny protest from the loss escapes me.  I'm positive he sees a confusing mixture of happiness, shock, and...lust?

"Again?" he asks me in a low grumble.

I leave the question unanswered, putting one hand firmly on the back of his heart, feeling that hard chest and rapid beat under my palm, and pull him hard against my lips.  He groans and steps in so his body is flush against mine as I open to allow him free reign of my mouth.  Our tongues tangle together, knowing each other just as Evan and I do.

My mind is racing as quickly as my pulse, but instinct takes over as my hands move all over him.  His solid arms, firm shoulders, strong back...tight ass.  I can't feel enough of him in this moment and lose myself to the desire consuming me.  His sweet murmurs along my neck, jaw, in my ear spur me on, almost to the point of no return, until loud squeals from the party rip through our haze.

All at once, I remember where we are and that anyone could walk upon us.  It also shames me that I was careless enough to leave Kaitlyn alone this whole time while I fondle my best friend in a field, so I regretfully pull back.  Evan's eyes take a while to slowly open and find mine, but in them I see everything I need to, overpowering any inkling I might have had about regret or embarrassment.  In those blue pools, there's no second guessing, these are not the eyes of my "friend."  I know my Evan, and he liked it.  I really liked it, beyond my wildest dreams that I never had.

"Come on," I say almost painfully, "we have to get back and check on Kaitlyn."

His shoulders slump and he rolls his eyes, but finally grabs my hand and interlaces our fingers.  We've held hands a million times, but never like this.  It feels good, I feel secure, but most of all - I start to believe what people have said here and there in recent years...I feel beautiful.

Evan tugs on my hand slightly, slowing me up some, and turns me to him.  "Laney," he barely whispers, "can you do one thing for me?"

He could say climb Mt. Everest right now and I'd agree.  The look on his face is so sexy and now that I know how that mouth feels...wait, what was the question?

"Yessss?" Am I flirting? 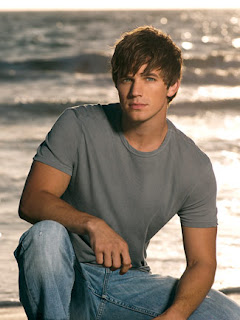 "Can we pretend you're really mine, just mine, Evan Mitchell Allen's, at least for tonight?"

I think of the gentle hand on my cheek, the soft then rougher kiss, the protection from Matt, the #14 on his back every week, the Disney movie marathons, and I say, without a doubt in my mind, "with pleasure."

The smile that spreads across his face and the fist pump I doubt he realizes he's just thrown assure me I should feel as good about my answer as I do.  At least for tonight...is that all I want?  All he wants?  I refuse to over-analyze right now; this is new, overwhelming, and exhilarating...I'm just gonna ride this wave without worrying; there's a first time for everything.

I'm not sure which of us sets the pace for the walk back, but neither speeds it up.  Once back, still hand in hand, I immediately notice that Kaitlyn is slow dancing with Matt, so she's definitely way past drunk, or maybe he used a better line on her.  Whatever.  As long as I can see his hands, I'll let her enjoy herself.  Evan nudges me, so I look up.

"Dance with me?"  Evan asks with an eyebrow raised and sexy plea in his eyes.

It's "Big Green Tractor" by Jason Aldean in the background; we both love this song.  I nod.

Evan sings the song softly in my ear as we dance.  He has no idea what a good singer he is, and apparently my body just received the memo tonight as well.  All the times we've cruised around together, singing at the top of our lungs, or played iPods while we fished...it did not have this effect on me.  Why oh why could this not be the longest song ever written???

When the song ends, Evan guides us to settle in on staggered bales.  Evan sits behind me and I lean back between his legs.  He's pressed against my back and his hands rest on my shoulders, hanging over slightly.  his pinky moves up and down the outside of my arm, lightly, but I feel it.

Turning my head to look back at him, I give him a smile.  His own reflects back to me as much happiness as I"m feeling.  it always feels good being around Evan, but something has shifted and now it feels even better.  Consumed by these new stirrings and the cover of the night sky, I'm emboldened.  I place my hand on his thigh and pull his leg in until it's tight against me, hearing he sharp intake of breath.  His body stiffens for a moment and then relaxes with his exhale.

"How long are we staying?"  I ask quietly.

"We can leave whenever you're ready.  I'm only here because you are."  He tucks my hair behind one ear as he says it and I've never felt more feminine in my life.

"I'll be right back," I say as I get up to go wrangle Kaitlyn home.

I secure a ride for Matt, who again apologizes for his earlier behavior, probably because he and Kaitlyn think it'd be a great idea for her to ride with them; which I respond to with a laughing "hell no."

Holding Kaitlyn up as we wait for Evan to bring the truck proves to be a challenge and I wonder how I'll get her past my dad.  Her rancid breath is really testing the duties of friendship right now...and if she pukes in Evan's truck, Lord help her.

"Laney, did you have fun?!"  Kaitlyn shrieks from the backseat when we're finally loaded.

"I actually had one of the best nights of my life.  Thanks for making me go,"  I tell her, casting a sidelong glance at Evan.  So worth it; the smile on his face as he reaches for my hand is one I will never forget.

S. E. Hall resides in Arkansas with her husband of 17 years and 3 beautiful daughters.  When not in the stands watching her ladies play softball, she enjoys reading YA and NA romance.