First, I Love You by Genevieve Dewey Review... 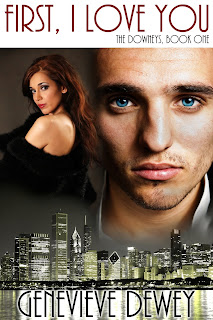 If Mario Puzo and Jane Austen crossed the time-space continuum and mated, “First, I Love You” would be their literary baby. Imagine being a detective with a mobster for a father, or a mobster with a straight arrow, good cop for a son. This is a relationship that is tricky on its best day. Add in some well-meaning meddling from a mob princess sister, an arrogant DEA agent, and gangsters running a human trafficking ring and you have a recipe for a book that refuses to follow the rules. Told from the perspective and point of view of each the six main characters this is the first novel in a trilogy about love, loyalty, revenge and redemption.
Omaha Detective Tommy Gates has kept his gangster father at arm’s length his whole life. Mickey Downey has spent the better part of the last two decades trying to find ways to get back the son he lost through Witness Protection. Now Tommy has taken an opportunity to work on a Federal Human Trafficking Joint Task Force in Chicago where his father lives. Tommy’s sister Kiki and his mother Mary see this as an opportunity to build a relationship between the two. Tommy’s new DEA partner James Hoffman sees it as an opportunity to gain leverage over Mickey Downey. Tommy’s other partner, FBI Agent Ginny Sommers wants to keep Tommy’s family as far from the case as possible. When Kiki and James join forces, sparks fly and it sets fire to a maelstrom of unexpected consequences for everyone involved.
One part The Godfather, two parts Emma and a dash of Casablanca mixed together, “First, I Love You” isn’t a detective novel, a gangster novel, a mystery, a romance or a family saga. It’s a little of all of the above. 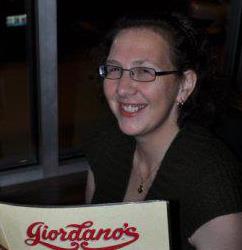 Genevieve Dewey is the author of The Downey Trilogy (First, I Love You & Second of All) and the short stories Bird Day Battalion & V-Day Aversion. She is a wife, mother, sister, friend and Anthropologist. She was raised mostly in Nebraska, partly in Arizona. She has a Master’s in Anthropology and worked as an Applied Anthropologist for years (even ran her own research company for a while) before deciding to be a stay at home mom. She loves passionate (rational) debates, reading, and libraries… oh, and Chicago and high-heels and chocolate and target practice and gangster flicks and anything with the FBI in it and run-on sentences. She lives in Nebraska with her three brilliantly diabolical children and one incredibly funny husband.
You can find Gen online at:
www.GenevieveDewey.com
Twitter: http://www.twitter.com/GenevieveDewey
Facebook: http://www.facebook.com/GenevieveDewey
Goodreads: http://www.goodreads.com/author/show/6441991.Genevieve_Dewey
Amazon: http://www.amazon.com/Genevieve-Dewey/e/B00936QL2S/
Pinterest: http://pinterest.com/genevievedewey/ 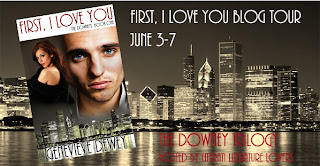 This was an interesting book and it kept me on my toes. In this book you follow a task force trying to shut down a human trafficking operation. One of the task force agents has an ex-mob father and two younger siblings. One of the task force agents dates the sister. The third agent is falling in love. All in all the story mainly revolves around the first agent and his mother.
I enjoyed the plot and the writing. I was not completely thrilled that each chapter was in a different characters point of view but it was the best way to tell the story so it worked. You get just enough background information to understand why the characters do what they do or act the way they do. The epilogue rounds things off well but it is still very much a cliff hanger that leaves you wanting more. Needless to say I absolutely can't wait to read the next book...Second of All!
Posted by Ashley at 11:22 PM