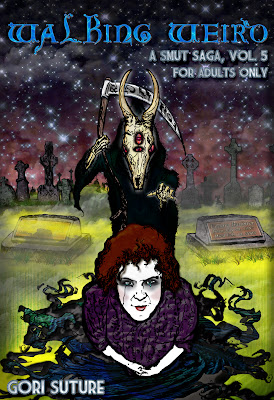 Synthesis, The Design of Moirai only glimpsed in the previous Smut Sagas is laid bare in Walking Weird, and this skein is a sticky one, ensnaring all of your favorite characters in Hecate's web.  After years of imprisonment, Astothan's chance for escape finally comes.  His cherished beloved from Geist Kinder is all he can think about, but time may not yield even for gods, and his struggle with forgiveness and love anew has only begun.  Poor Jasper's troubles were only just beginning in The Witch of Hainted Holler, and now he must pick up the pieces of that fateful day and carry the weight of the world on his scrawny shoulders, with the Grim Reaper his only friend.  In Shatter Kinder, being a father was Phoenix's fondest wish; yet paternity of monsters is fraught with danger and omens.  Eldridge and the rest of Omega begin to master the powers revealed to them in Asphyxia, yet old enemies hatch fresh schemes.  The mad adamantine shuttle flies and as the weave grows ever taught, the sole path navigable is Walking Weird!

The confluence of Gori's first four books is a torrid one, and the reader is sure to get wet, so kick back and enjoy, while you still can... 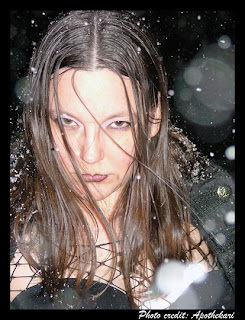 Hailing from the outskirts of Mayberry, North Carolina, Gori Suture has been writing fiction since she could hold a crayon.  Her work is often allegorical, chronicling man's pursuit of understanding God and the God within.  Simultaneously debase and philosophical , she juxtaposes eroticism and horror with metaphysical introspection.  She is currently working on the last of the Smut Sagas, the Sorrow and Rue Eroto-Obscurities, and a comic book series is also in the works.