Surrender to Me by Ella Jade

I'm pleased to announce the release of Surrender to Me, the sequel to Make Me Stay. 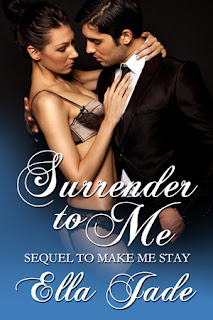 What happens when a Dominant falls for his not-so-submissive attorney?

Sassy lawyer Arianna Covington relocates to New York City after a humiliating divorce.  She's looking for a fresh start when she agrees to become Martin's exclusive attorney.  She's intrigued by his domineering personality and wants to know why women kneel at his feet.

Their attraction is undeniable despite Ari's initial beliefs that she will never submit to Martin's desires.  But Martin is up for the challenge.  Arianna is more than he ever imagined in a woman.  He vows to claim her heart, with or without the games.  Who will surrender first?

Featuring Cade and Gracie from Make Me Stay.

Check out the hot and sexy trailer for a peek into the plot.

"All the subs act that way around you?"  Arianna asked.

"It's the only way they know.  It's what's expected of them."

"I don't understand how any woman would bow down like that.  It's not normal."

"Maybe not for you."  Martin understood Arianna's position.  Most who didn't participate in a Dominant and submissive relationship didn't get it.

"Arianna, this is a lifestyle you can't possibly comprehend because you know nothing about it.  A submissive gets just as much as he or she gives.  The arrangement they enter into with a Dom is consensual.  Roxy is not forced into being here.  Her Dom respects and cares for her.  She has a very good life."

"When she disobeys.  It's in her contract."

"A contract that can't possibly be enforced in court."

"Spoken like a true lawyer."  He finished his scotch.  "The contract is to protect them both.  It lists what is expected of a sub and what the Dominant's responsibilities are.  They outline hard and soft limits.  We create a safe, sane, and consensual environment, and that contract maintains trust between the two parties.  As long as it is upheld between the parties involved that's all that matters."

"To each his own, I suppose."  She shrugged.  "I'm your real estate attorney.  What you do here is none of my business."

Then why are you here, kitten?

"I'm very open, Arianna.  If you have questions, I'll be happy to answer them.  People should be educated in my lifestyle.  It isn't as uncommon or bizarre as you may think."  He reached for her hand.  "I hope you won't judge me without getting to know me."

"Um, no."  She looked down at their joined hands.  He liked the way her cheeks turned colors when he flustered her.  "Of course not.  This whole environment is different.  It's going to take some getting used to."

"I understand."  He ran his thumb over the soft skin of her hand.  "If you'd prefer not to meet here anymore-"

"Very well."  He smiled because as he suspected she wanted to be there.  "Will you join me for dinner?"

Martin couldn't remember the last time he'd asked a woman to have dinner with him.  He usually just summoned a sub when he was in the mood for company.  Gracie was the last woman he'd spent any time with at all.  Perhaps it was time to explore his options.  Obviously, Arianna would be different than the other women he dealt with, but he liked the change.  When Gracie left him for Cade everything changed.  He hadn't been interested in another sub.  As a matter of fact, he hadn't been interested in another woman until now.

"I'd like you to call me Martin."  Allowing people to use his name wasn't a privilege he granted often, but everything was different with her.  He stood from the bar and picked up her briefcase.  "I hope you like Italian.  I ordered enough for six people.  I wasn't sure what you would want."

"Italian is fine."  She took his extended hand and walked to the back of the club with him.  "Why didn't you just wait and ask what I would want?"

"I'm not used to asking."  He motioned for her to take a seat in the huge u-shaped booth that overlooked the Manhattan skyline.

"Oh, Martin."  She giggled.  He liked the way his name tumbled off her lips.  "You have a lot to learn about non-submissive women."

Surrender to Me is the sequel to Make Me Stay but both books stand alone so the reader can choose to read either one first.  You may want to start with Make Me Stay to get the back story.

Both books are available on Amazon, Barnes and Noble and ARE.

Ella Jade has been writing for as long as she can remember.  As a child, she often had a notebook and pen with her, and now as an adult, the laptop is never far.  The plots and dialogue have always played out in her head, but she never knew what to do with them.  That all changed when she discovered the eBook industry. She started penning novels at a rapid pace and now she can't be stopped.

Ella resides in New Jersey with her husband and two young boys.  When she's not chasing after her kids, she's busy writing, attending PTO meetings, kickboxing, and scrapbooking.  She hopes you'll get lost in her words.

You can find Ella here...

During this tour I"m giving away a $10 Amazon gift card to help feed your reading addiction.