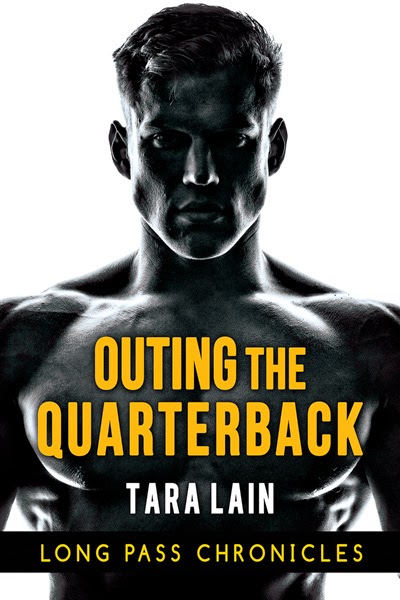 Will Ashford lives in two closets. He meets his wealthy father’s goals as both the quarterback for the famous SCU football team and a business major, but secretly he attends art school and longs to live as a painter. And he's gay. But if he can win the coveted Milton Scholarship for art, he’ll be able to break from his father at the end of his senior year.

In a painting master class, Will meets his divergent opposite, Noah Zajack. A scarred orphan who’s slept on park benches and eaten from trash cans, Noah carefully plans his life and multiple jobs so he has money and time to go to art school. Will's problems seem like nothing compared to Noah's. Noah wants the scholarship too and may have a way to get it since the teacher of his class has designs on him, a plan Will isn't happy about.

When a gossipmonger with a popular YouTube channel finds evidence that Will is gay, the quarterback’s closet doors begin to crumble. Hounded by the press and harassed by other players, Will has to choose. Stay in the closet and keep his family’s wealth, or let the doors fall off and walk out with nothing. Nothing but Noah.

You can pre-order your copy at

Will’s eyes moved past the teacher. Lots of easels, students already working, supplies all over the place and—holy shit.
The artist’s model sat naked on a small platform in the middle of the room. But not just no-clothes-on naked. We were talking gleaming, pale beige skin, shining hair, and hard-as-stone butt-cheeks naked.
Will’s deprived cock did a happy dance.
The model’s back—read, bare ass—faced Will while his graceful spine curved away.
The beast in Will’s pants started to grow.
The guy’s long brown hair flowed over his shoulders and outlined his profile, perfectly presented to Will’s artist eye. High-bridged nose, prominent cheekbones, pointed chin.
The damned traitor prick pushed so hard against Will’s zipper he probably had teeth marks on his cockhead. Why was it every time he decided to go straight, some cosmic joker had to twiddle his fucking finger and prove beyond a shadow that William Elliott Ashford III was as gay as a circus tent? Shit!
“Are you in this class?”
Will focused his eyes back on Masterson and clasped his hands in front of his crotch, still holding his tackle box. “Yes, sir. Sorry I’m late. Traffic.”
Masterson glanced at Will’s folded hands and sucked on his cheek like he was trying not to laugh. “Name?”
Will shifted to get the animal to go back in its cave, but no matter how hard Masterson stared at Will, the model still sat there in all his fucking glory. “Will Smith, sir.”
Masterson glanced at a paper on his desk, made a check mark, and pointed toward an empty easel with a folding table beside it and a rickety chair. “There’s a place in the back, William.”
“Will.”
The man smiled and the lean, almost harsh face softened. “Will. Made any good movies lately?”
Oh my, so very original. Will smiled. “Yeah.”
Masterson waved his hand toward the easel and looked at the model. “You can move, Noah.”
Will walked back to the empty place. Do not stare at that guy. Don’t stare. His name is Noah. Noah.
Weird. Usually life models were “interesting” looking, for lack of a better word. Fat or craggy, old, and character-filled. Not perfect, smooth beauties like this guy.
Will set his tackle box on the floor, opened it, and pulled out brushes. Masterson walked up beside him with a canvas. “This is gessoed already so you won’t have to waste any time.”
Will set it on the easel. “Thanks.”
Masterson crossed his arms. “I’ve seen the work you submitted when you applied for the master class. Promising.”
Wow. Music to his ears. “Thank you, sir.”
Masterson grinned. Who knew dimples could live in cheeks that thin? “Try Dwight so I don’t feel so old.”
Will smiled. “Thanks, Dwight. I wouldn’t want to suggest something that’s not true.”
The instructor winked at him and walked back to the beat-up desk in the corner. Winked. Will had read that Masterson was gay. Had the teacher just been flirting with him? Or shit, maybe he’d been coming on to Masterson. When you spent your life in the closet, every interaction was a fucking minefield.
Will sat in the chair and looked up at the model. His breath caught. No way. The beautiful guy had repositioned himself and now sat facing Will, his legs crossed, leaning forward with his arm resting on his thigh. Everything shimmery and perfect—if you didn’t count the six-inch scar that ran from the right corner of his mouth up to the edge of his very blue eye. It skipped the eye miraculously and continued above it on his forehead, disappearing into his hair. The puckered skin pulled that eye closed a slight bit more than the other. Funny. Without it, the kid would have looked almost too angelic. As it was, the eye gave him a permanent touch of cynicism. Yeah, anybody who’d picked up that badge of courage in his life deserved to be a cynic.