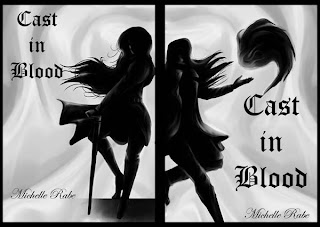 Help select the cover for this book here:  http://www.surveymonkey.com/s/22DGRQ2

The vampire was dressed in unrelieved black. His hair fell in long lanky shanks, and he looked as though he’d forgotten to feed for the past few days. His flesh was pale and drawn tight over his bones. The werewolf was just as bad, in a flannel shirt with the sleeves ripped off and tattered jeans.
“Goddess! Could you two be any more cliché?” Morgan rolled her eyes and set her cane on the end of the table. “Do either of you have any idea of the trouble you caused?”
“That poser started it,” the vampire insisted in a high pitched whine that sent a spike of pain through Morgan’s skull.
“That poser, as you call him, happens to be a regular, but that’s beside the point.” Morgan reached down and slipped the blade free of its cane sheath. “Do either of you morons have any clue how many hoops I had to jump through to get this establishment cleared by the Council?”
“An insane amount of paperwork. Not to mention upholding a strict set of rules at all times,” James answered from where he leaned on the door, sounding bored.
“There are advantages to slogging through all the red tape though,” Morgan continued. “It does afford the owner some…” she paused and examined the edge of her blade, “…latitude when it comes to dealing rule breakers.”
“I really didn’t expect to be dealing with corpses tonight.” James sighed, looking down at the faded jeans and white t-shirt he wore.
“C-Corpses?” The werewolf stuttered. “I-it was just a fight!” Desperation pushed his voice into a high falsetto squeak and his breathing sped up.


Morgan turned and moved closer, invading his personal space. “Here’s the thing. The guy you decided to mess with, is one of my regulars. Not to mention the fact that he is well-known among humans.” She shook her head, dark curls falling over one shoulder. “Had my people not intervened, you might have drawn the attention of gossip hounds. I cannot allow that to happen.” She took a half step back from the table and tapped the toe of her high-heeled boot. “So, what do you think?” She looked over her shoulder at James. “Quick?” she smiled. “Or slow?”

~~~~~~~~~~~~~~~~~~~~~~~~~~~~~~~~~~~~
After studying acting at The American Academy of Dramatic Arts Michelle spent several years living and working in Hollywood. While working on set, Michelle used her down time to begin writing fiction. Wanting a change of scenery, she moved to Santa Cruz and began writing full time. Three of her short stories have been featured on the Smoke and Mirrors podcast. As an independent author Michelle is currently running a crowd funding campaign to fund production and marketing of her debut novel Cast in Blood which you can learn more about here: http://tinyurl.com/castinblood.