Lily of the Valley... 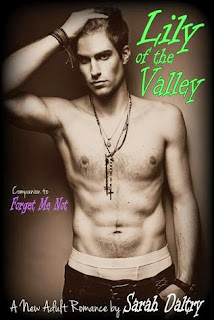 You met them in Forget Me Not. Now, hear Jack’s story.

Plagued by a dark past, Jack sees college as a way out. Desperate to escape the area where he grew up, the people who know his secrets, and his own family, he deals with his problems through alcohol and sex.

When he first sees Lily, she’s the epitome of everything he hates. Yet something about her makes Jack rethink everything he knows and assumes about other people. Now, with the help of his best friend and lover, Jack has to decide if he wants to pursue something that he knows will only end badly.

Can Lily be one of the few people who can see Jack for who he really is – or will his darkness be too much for her to handle?

At work, though, the people are real. Both the customers and the staff. During the busy times, we get more douchebags, mostly my classmates who probably should be in the library and not eating a hangover away. Mal is also on this morning. He’s a recovering alcoholic, a total asshole to nearly everyone, and an incredibly shitty employee in a lot of ways. But the dude can cook and when I walk in a couple minutes late with no explanation, Mal just shrugs and hands me an order.
“Big parties last night?”
“Huge party. I spent the night reading Dostoevsky.”
“He a scientist?” Mal flips over the largest slab of ham I have ever seen. For all the sort of dive element of this place, the food is still fucking great.
“Yeah, something like that.”
“Eh. Never cared for all that mumbo jumbo. Don’t know any of it and I’m doing just fine.”
That’s something else I admire about Mal. By no one’s standards is he doing just fine. He has a tendency to fall off the wagon as soon as he approaches his ten month anniversary – which he has been doing for likely longer than I have been alive. He’s been married and divorced five times. He has three kids who don’t speak to him. Finally, he only eats the food from the café and he lives in a motel out by the prison. Oh – and he works as a short order cook in a shitty café. But in his mind, life is just fine. Sometimes, I think I need to get a hold of whatever it is that keeps him from losing his shit.
We settle into our routine, since there is little Mal and I can talk about. I can’t discuss Raskolnikov’s character traits and Mal simply has nothing to say. So we cook in silence, but it’s comfortable. After everything I have been through, I feel a strange affinity for this place. Even thinking about leaving when I eventually get the hell out of town makes me a little sad. I hate that it makes me sad. I want to leave with no connections, with no strings.
I go to stick an order on the counter for Liz when I see her. Strawberries. She’s with some dude, who is basically what I pictured when she mentioned her boyfriend. Broad, tan, blond, and eating like a fucking pig. I don’t know what they’re talking about and I can’t see her face, but he loves her. It’s immediately recognizable and I hate him for it. I don’t even know why I hate him for it, since at least maybe he’s not as much of a dick as I would have expected. If we had been placing bets, I would have gone with the safe assumption he had something else on the side to make up for having such a sweet and pure girlfriend. I wonder if maybe she isn’t as innocent as she looks. The thought makes me horny again. I don’t get what is so damn attractive about this typical girl, but something makes me want to taste every inch of her skin.

~~~~~~~~~~~~~~~~~~~~~~~~~~~~~~~~~~~~~~~~
Sarah Daltry writes erotica and romance that ranges from sweet to steamy. She moves around a lot and has trouble committing to things. Lily of the Valley is her third full length novel, although she also has several story collections and two novellas available. Her other novels are Forget Me Not, the story that tells Lily’s version of events, and Bitter Fruits, which was available shortly, but is now in the contract phase with a major publisher. When Sarah isn’t writing, she tends to waste a lot of time checking Facebook for pictures of cats, shooting virtual zombies, and simply staring out the window. 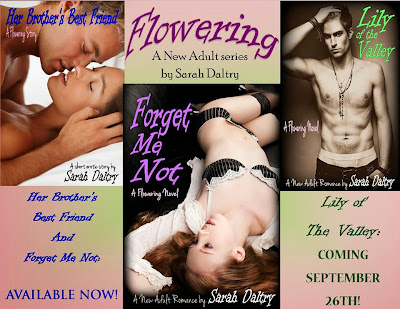