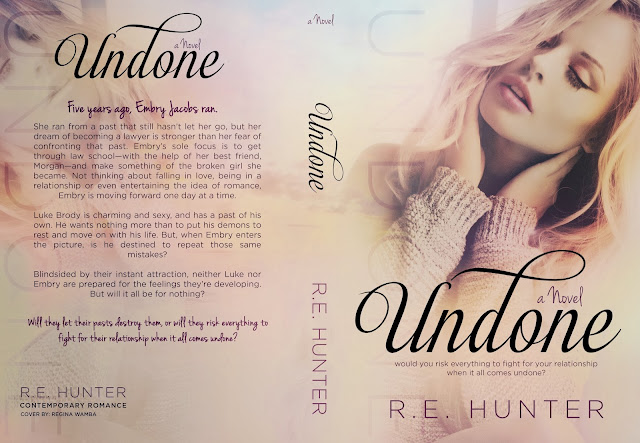 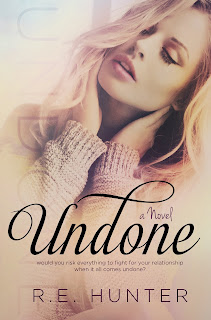 
She ran from a past that still hasn’t let her go, but her dream of becoming a lawyer is stronger than her fear of confronting that past. Embry’s sole focus is to get through law school—with the help of her best friend, Morgan—and make something of the broken girl she became. Not thinking about falling in love, being in a relationship or even entertaining the idea of romance, Embry is moving forward one day at a time.

Luke Brody is charming and sexy, and has a past of his own. He wants nothing more than to put his demons to rest and move on with his life. But, when Embry enters the picture, is he destined to repeat those same mistakes?

Blindsided by their instant attraction, neither Luke nor Embry are prepared for the feelings they’re developing. But will it all be for nothing?

Will they let their pasts destroy them, or will they risk everything to fight for their relationship when it all comes undone?

“Hey there,” he said, lifting his arm so Embry could shift around to his front.


“Hey handsome.” Embry stood on her tiptoes to give him a good morning kiss, loving that even with her height, he still made her feel small.


Luke’s arms wrapped around her, hands settling on her lower back. He traced slow, sexy circles as his fingers wandered lower, caressing Embry’s curves until they reached the bare skin of her legs. He pulled back just enough to look at her, then raised his eyes to the sky and groaned. “Do you have something against pants?”


Embry looked down at her bare legs then back up at Luke. She did her best to appear coy, batting her eyelashes and chewing on her bottom lip. “No, why?”


Luke grabbed her bare ass under the shirt and pulled her against him as he began nibbling on her neck. “Because, you refuse to wear the boxers I gave you, and I can’t think straight when you’re walking around my bedroom with nothing on but my t-shirt and that tiny scrap of lace you call a thong. Go put something on, please.”
“What if I don’t want to?” Embry teased.
“You have to.”
“Why?”
“Because if you don’t, we won’t be leaving the bedroom, and I want to make you breakfast.” 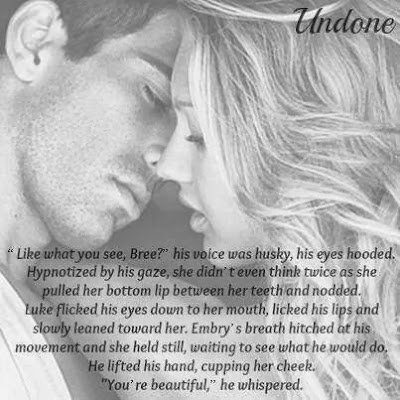 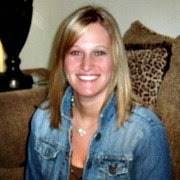 R.E. Hunter is a native New Yorker and lives on Long Island with her husband and their monster kitty. She works as an attorney by day and writes whenever she can. As an avid reader and writer, she's excited to be on this crazy journey publishing her debut novel, Undone, this November. When she’s not writing, you can usually find her somewhere near a beach. She loves traveling, road trips, concerts, photography and good wine. 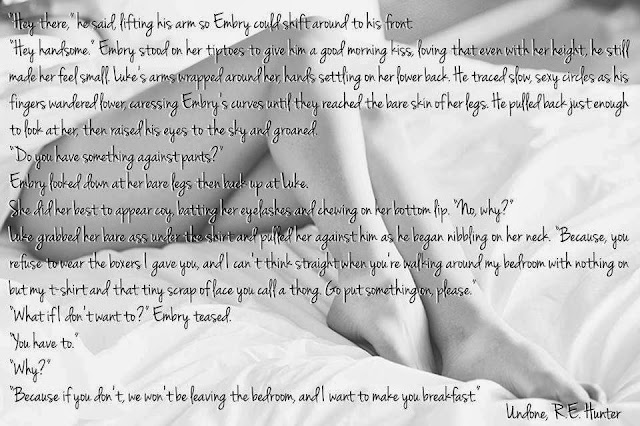