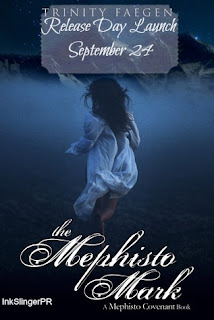 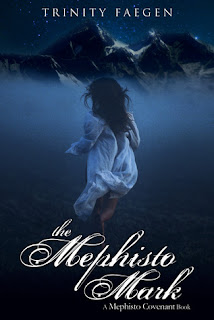 Orphaned at six and sent to live with abusive relatives in Bucharest, Mariah learned early in life to box up violent, agonizing memories and put them in permanent mental storage. Now almost nineteen, she has a paying job, a tiny apartment, and a plan to attend university. She loves her independence and is steadily overcoming her past, but when an enigmatic stranger walks into the pub where she works and the trajectory of her life changes yet again, she begins to wonder if she’ll run out of mental shelf space.

The only females unafraid of the Mephisto brothers are the extremely rare Anabo, born without Original Sin. Over one hundred years ago, Phoenix was first to find one, but he made a fatal mistake and she was murdered by his oldest brother and enemy, Eryx. Phoenix soldiered through the next century wrapped up in grief and guilt, his only outlet planning takedowns of those who pledged their souls to Eryx. When one of his brothers brings Mariah to Mephisto Mountain, he’s torn between his instinctive, powerful need to pursue her, and his certainty that he can never have her.

Drawn into the world of the Mephisto, Mariah sees the pain and misery Eryx unleashes on humanity, and the boxes in her mind begin to fly open, one by one. All that keeps her from slipping off the edge is her unlikely, sexually charged friendship with Phoenix. He’s incredibly screwed up; she’s completely broken. It would take a miracle for them to find happiness. Then Eryx brings the war for Hell to a whole new level, forcing Mariah and Phoenix to make a choice that will bind them together for all eternity, or rip them apart forever.

Watching Mariah shout her triumphant joy as she came closer to me at breakneck speed, my want, my need to join her was a physical thing that coiled around me and squeezed so hard, I was breathless.

Her stop was flawless. She was breathing hard, laughing up at me as she moved her goggles to her cap. Her eyes were bluer, I could see her glow, and her scent was beautiful. My brothers and Sasha skied up just behind her and looked at me with obvious anxiety. They knew I was pissed.

Mariah didn’t. I bit back what I wanted to say to them and instead said to Mariah, “I wish you weren’t a liar. That whole I’m poor thing really had me going. Clearly you’ve lived in Switzerland your entire life and trained with the Olympic team.”

“This is the most fun I’ve ever had. It’s such a rush! And the mountains are beautiful, and all the snow.” Still breathing hard with exertion, making her breasts rise and fall, she looked down at my boots. “Where are your skis?”

Peeling my gaze away from her chest, I focused on her eyes. “I don’t have skis.”

“Are you scared? I mean, it’s dangerous, I guess, but it’s not like you’re ever permanently hurt. If I get hurt, Sasha says she can fix me.”

The only thing in the world I was scared of was what I could do to her if I wasn’t constantly on guard. She was so wounded. I had to keep that front and center in my mind at all times. Had to be careful and not step over a line. Not only my words, but actions and even thoughts.

I fought to keep from looking at her breasts again. Jesus, that dream had me undone. I wished I could see her as I saw Sasha – like a sister. I’d never, even once, had a sexual thought about Sasha. Strange, because honestly, I had sexual thoughts about most women. Except for the Luminas. I was a son of Hell, but even I couldn’t have impure thoughts about angels.

Would this low hum of sexual awareness disappear once Mariah became a Lumina? Could I then see her as a beautiful girl and not a hot woman I’d sell my soul to see naked, to touch, just once? I cleared my throat and said, “I assure you I’m not scared of skiing.”

“Then work later and ski with us now.”

I leaned down and whispered, “You’re away from the mountain, at risk.”

With her face scarcely two inches from mine, she whispered back, “They think I don’t know, but Sasha is keeping Eryx front and center in her mind. He’s in Washington and I’m nowhere on his radar. Come on, Phoenix, don’t worry so much. Go get some skis and do this with me, just for a little while.”

“I’d rather take you home.”

“Three more hours until dark, then I’ll go back and stay there until it’s safe for me to leave again.”

I knew I should say no. It was a needless risk. But the look on her face, the sound of her laughter – I wanted to hear it again and again. I sighed. “All right, fine, but the second you ski too far away from any one of us, we’re going back. Capice?”

She grinned at me and my heart thudded hard against my ribs. “Let’s race.”

I groaned, then we all popped down to Mountain Village so I could get some skis. And food. I hadn’t eaten and was starving.

We went in the Blue Dog Grill and ordered crab claws, chicken kabobs, and burgers. Mariah ate almost as much as Sasha, who ate far more than an ordinary human girl because of Mephisto. I wondered if Mariah was too poor to buy food? She obviously relished what she ate, seeming to enjoy every single bite.

When we were back up on the slopes, she beat me twice, I beat her twice, and Jax said we had to have a tie-breaker, which is how we wound up at the top of the most difficult run at Revelation Bowl. I looked down at the almost vertical drop, at the tiny figures that were Jax and the others waiting for us at the bottom, and asked her, “Are you sure about this?”

“They say chicken in Romania?”

“It’s a worldwide euphemism for cowards.”

“Look it up.” She schussed left ski, then right ski, gripping her poles, focused on the slope. “Are you in, or not?”

“Prepare to lose, my friend.”

“I’m out of practice.” I was never actually in practice. Until today, I’d skied four times my whole life, and those were related to a takedown back in the fifties. I learned, practiced, then we did the takedown, and my skiing career was over.

“Excuses already? You must think you’re going to lose.”

My competitive nature roared to life. “Not hardly.”

We counted together and as soon as we both said three, I pushed off. Just as I’d thought, it was incredible. Exhilarating. I risked a glance at her and saw she was laughing. We were neck and neck, moving faster and faster. I could see Jax and the others clapping and yelling. I’m pretty sure they were all rooting for Mariah, which only made me want to win that much more.

Unfortunately for my manhood, she smoked me, probably because I tried to be tricky and jumped a mogul instead of skiing around it. My landing almost sent me crashing, and by the time I’d regained my balance, she was ten yards ahead, and I never caught up.

When we were with the others, she pulled off her goggles and hat and high-fived Sasha. And she laughed. For the first time in a thousand years, I didn’t mind losing. I’d do it over and over, just to hear her laugh. 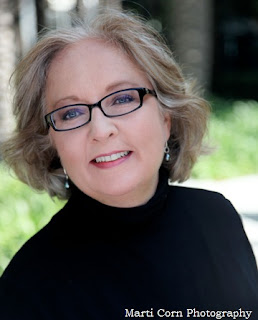 Author of the RITA winning Pink Files series, Stephanie Feagan has had a love affair with romance novels since she was eleven and discovered there are kissing scenes in Victoria Holt books. She spent a lot of time in her closet with a flashlight, reading as fast as possible to get to the end, only to start a new book and begin the whole Leave-Me-Alone-I’m-Reading cycle all over again. She still stays up until the wee hours to finish books, now courtesy of a lighted e-reader which she believes is mankind’s greatest invention ever.
Stephanie also writes Young Adult and New Adult paranormal romance as Trinity Faegen. A practicing CPA who loves travel, books, new pencils, old keys, and smart guys, she lives in the oilfields of west Texas with her engineer husband and a mean cat. She’d love to hear from you. She answers to Stephanie, Trinity, Hey Lady, and Mom, and can be reached atStephanie@StephanieFeagan.com or Trinity@TrinityFaegen.com
She’s aware the similarity between her pseudonym, Faegen, and her real name, Feagan, confuses pretty much everyone, herself included. Since so many mispronounce Feagan as FEEgan instead of FAYgan, she thought she’d mix it up when she took a pseudonym and make it easier on people. Now people say FayEEgen, and spell it wrong. Next time she takes a pen name, she’s totally going with Smith or Jones.