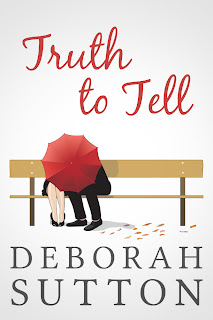 Joanne Lawson tricks her way into a secretarial job with widowed flautist Mark Jenson, little realising the tangle of intrigue she’s walking into. She has her reasons for being less than honest, but Mark has a few dark secrets of his own.

When a fan letter apparently from Mark's dead wife targets Joanne, she realises there is more at stake than being caught in a lie.

Amidst romantic flute music and stormy Cotswold weather, Joanne sets out to uncover the truth. Who is sending the letters from beyond the grave? How can she win Mark’s trust when she lied her way into his life and home?

And is she really falling in love with him, after promising herself she was done with men?

~~~~~~~~~~~~~~~~~~~~~~~~~~~~~~~~~~~~~~~~
Deborah Sutton writes romance and fantasy novels, and short stories.
Following a nomadic childhood, she achieved a first class honours degree in Creative Writing, then spent time teaching writing in university, college and community classrooms. Eventually the call of the pen urged her to write full-time, which she's done since 2009.

She lives and works in Staffordshire, UK, sharing her home and garden with one daughter, one dog, and several chickens.