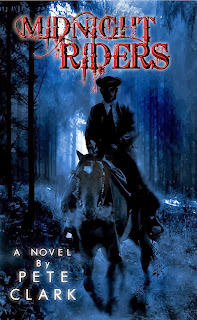 “Gather ‘round people and you shall hear
about a bunch of bullshit that is clear.


Of riders and horses and monsters too;


your parents lied - they can still get you.
Hardly anyone who was there is alive
to dispel the rumor, uncover the lies,
but there was more than one man who rode that day
and more than just Redcoats who got in their way.”


Along the way, Longfellow lost something in his translation it seems.


Everyone has heard of the French and Indian War and the American Revolution. However, they have not heard about them this way! The American founding fathers had a lot more to deal with at the end of the 18th century than tariffs and tea; avoiding hurled trees from Wendigos and gargoyles falling from the sky took a lot of patience. How is Samuel Prescott supposed to hunt the leader of the Rippers when the British keep infringing upon the colonists’ rights?

Boone was sure he heard scream as the zombie Forbes charged at them. On his way, Forbes took a nice hearty bite out of an off duty soldier who happened to be nearby. “Grullarrk,” the soldier said clearly before falling to the ground.
Forbes Zombie was fast. A hell of a lot faster than Forbes was in real life. How the heck did that work out, Boone wondered. Oh well. He unslung his double-barreled reverse musket, an invention of ; the guy was good for something, thought Boone as he fired and turned his former commanding officer’s head into a floating cloud of red mist. He then flipped the release on his musket, spun the barrels so that the fired barrel faced back and the loaded faced forward, and he vaporized the downed soldier’s head as well just to be sure. He wasn’t about to let any zombies rise on his watch.
“Everybody to the wall,” Fraser ordered. It seemed that Boone’s gunfire and the shrieking had alerted the remaining werewolves, who were apparently done feasting on the French and wanted to upgrade to a little English breakfast.
“Zombies and werewolves,” whined . “I sure hope no vampires show up.”
“Vampires?” Boone countered. “What are you, a child? Vampires aren’t real.”
“They’re not?” asked .
“No - vampires are just a myth. But dragons, dragons will fuck your shit up,” said George Washington.
~~~~~~~~~~~~~~~~~~~~~~~~~~~~~~~~~~~~~~~~~~

Pete Clark likes writing, animals, potato chips, and cheese. Midnight Riders is his first published novel, although he can also proudly say he finally finished Helix Crashing, the fantasy novel he has been working on for over a decade. In addition, he has written Across the Barren Landscape, a collection of linked Western short stories. He also writes plays, both dramatic and comedic. When he is not writing, Pete tends to ignore everyone around him and obsess over sports.