The Radius of Us Review... 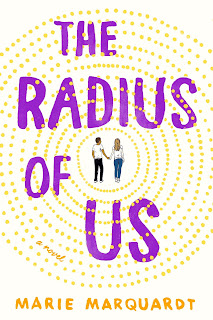 Marie Marquardt’s first novel for young adults, Dream Things True, resonated with readers of all ages for its engrossing characters and compelling storyline. At the same time, the novel presented an unwavering critical view of the stigmas and difficulties plaguing undocumented youth in U.S. schools. It’s a plight Marquardt knows intimately and a cause she’s passionate about, as for the last two decades she has dedicated herself to assisting Latin American immigrant families as they adjust to living in the South.

Now, St. Martin’s Press will release her second YA novel, a love story about two star-crossed teenagers who overcome their debilitating fears together: THE RADIUS OF US (publication date: January 17, 2017/ hardcover, $18.99). Inspired by Marquardt’s research, friendship, and advocacy with Latin American teenagers fleeing gang violence and seeking asylum in the United States, the novel takes an unflinching look at the terrible hardships these young people face by exploring the emotional landscape of their experiences. At a time when the issues surrounding undocumented immigration and deportation have reached a fever pitch, THE RADIUS OF US offers its readers a happy and uplifting outcome for a scenario that so often ends in tragedy in the real world.

Gretchen Ashland is a sheltered and privileged white girl living in a posh Atlanta suburb. Phoenix Flores Flores is an El Salvadoran teenager who’s fled his country to save his twelve-year-old brother Ari—and himself— from being forced into a life of gangs. After a disastrous journey through Mexico that landed him in detention and separated him from Ari (who has lost his ability to speak because of the traumatic experience), Phoenix has found temporary shelter with a couple he describes as“sweet churchy lesbians” in Gretchen’s neighborhood. With a monitoring bracelet around his ankle to keep him within a twenty mile radius, he manages a community garden project and tries to keep a low profile. On the surface the two teens have nothing in common, yet they find themselves inexplicably drawn to each other. They discover that they both have been victims of gang violence and as a result, fear rules their lives. As they fall in love with each other, Gretchen and Phoenix learn to face the terrors that are holding them back and imagine a future together.

Told in alternating first person points of view, THE RADIUS OF US celebrates the magic of a first kiss, the unbreakable bond between siblings, and the possibilities inherent in forgiveness, redemption and reinvention. The book also offers an intimate glimpse into the causes and devastating impact of Latino gang violence, both in the United States and in Central America, and shows the risks that victims take when they seek new beginnings. Most importantly, Marie Marquardt’s novel shows how people struggling to overcome trauma can find healing in love.


Phoenix is in Georgia waiting to find out if he will be sent back to El Savador and worrying about his brother who is currently in Texas.  Gretchen is working past a traumatic experience she had a while back.  She was struggling until with being in public and panic attacks until the day she meets Phoenix.  Can these two heal each other?  Can they feel comfortable with each other?  Can they make something work and stay together?  Will Phoenix get to stay and get his brother back?
I absolutely loved this book.  This is a great story about something that you wouldn’t normally see in a book, especially a YA book.  I loved the characters and fell in love with them quickly.  The plot was intense and deep but really good.  Even the flow and pace were good and worked well with the characters.  The authors writing style was fun and dynamic.
If you are looking for an intense book then look no further.  However, it isn’t just intense though.  It is fun and deep and sweet.  There were so many emotions floating through me as I read this book.  I laughed, I cried and wanted to throw my kindle across the office…lol.  Such a great book with some good lessons to teach/learn.  Thank you for an amazing book!
5 stars! 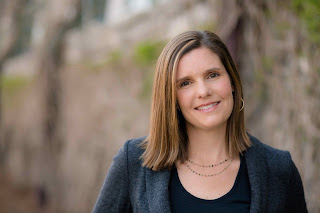 Marie Marquardt is an author of young adult novels, a college professor, and an immigration advocate. Her debut novel, Dream Things True (St. Martin’s Press), was a 2015 YA BEA Buzz Panel choice praised in Kirkus as a “worthy examination of undocumented immigration in the American South through the lens of young love.”

Her second novel, THE RADIUS OF US, will be published by St. Martin’s Press in January 2017. Uplifting and hopeful, THE RADIUS OF US reflects the experience of Latin American teenagers fleeing gang violence and seeking asylum in the United States and the possibilities for change. It’s an issue that Marie Marquardt cares about profoundly, and she believes that connecting to it emotionally it can be a powerful antidote to the hate, fear, and misunderstanding that plagues our society.

“When I speak to groups about immigration and the need for immigration reform, I can offer clear, rational explanations and data on why our immigration system needs to be repaired,” Marquardt says. “But they only begin to care when they meet and get to know someone who is stuck in between. Writing a fictional (but very real) story brings readers into intimate, personal engagement with a messy, complicated, political situation.”

Dr. Marquardt is a Scholar-in-Residence at Emory University’s Candler School of Theology and has been an advocate for social justice for Latin American immigrants in the South for two decades. She has published many articles and co-authored two non-fiction books on the issues involved and has been interviewed on National Public Radio, Public Radio International, and BBC America, among many other media outlets. She is also the co-chair of El Refugio, a Georgia non-profit that serves detained immigrants and their families.

Marie Marquardt is a proud member of the We Need Diverse Books team and lives in a busy household in Decatur, Georgia with her spouse, four children, a dog and a bearded dragon.

LAUNCH EVENTS FOR THE RADIUS OF US