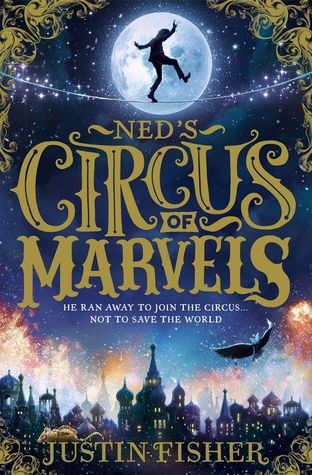 From exciting debut author, Justin Fisher, comes this rip-roaring, page-turning new magical adventure. Perfect for fans of House of Secrets.Ned Waddlesworth has always considered his world to be exceptionally ordinary. Until the day he discovers it ISN’T. AT ALL. Because on Ned’s thirteenth birthday he discovers that everything magical he’s ever read about or imagined is REAL.  And without him, the world will soon be engulfed in monstrous beasts and beings.So with the help of a robot mouse, a girl witch and a flying circus unlike any other, it’s up to Ned to swoop in and save the day!Roll up, roll up, and prepare to be AMAZED by Ned and the marvellous, magical, monstrous flying circus!

Ned grew up thinking that his parents was normal and that his mother had died shortly after he was born.  On his sixteenth birthday he gets thrust into a world he didn’t know existed, his parents world, without his dad.  He finds out the truth about who and what he is by complete strangers.  Then he finds out that he is meant to save this world he never knew existed with the help of a girl his mother is protecting.  Can he save the girl, his parents and this magical world?
I thought the book started out slow but after a couple minutes it definitely picked up the pace.  There were a couple places where things happened a little fast and I lost track of who Ned was with and what was going on but I quickly caught up.  That being said, I absolutely loved the dynamic array of characters and the world in which they lived.  I enjoyed the authors writing style.  The plot was exciting and enjoyable.  I couldn’t put it down and finished it in a couple short hours.
I have never read anything by this author before and I am excited to see what happens with these characters in the following books because as I understand it this is going to be a series.  I may be wrong on that but I certainly hope not.
4.5 stars
Posted by Ashley at 12:30 AM