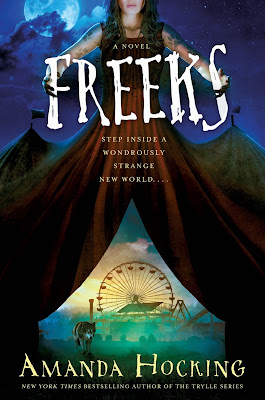 Welcome to Gideon Davorin’s Traveling Sideshow, where necromancy, magical visions, and pyrokinesis are more than just part of the act…Mara has always longed for a normal life in a normal town where no one has the ability to levitate or predict the future. Instead, she roams from place to place, cleaning the tiger cage while her friends perform supernatural feats every night.When the struggling sideshow is miraculously offered the money they need if they set up camp in Caudry, Louisiana, Mara meets local-boy Gabe…and a normal life has never been more appealing.But before long, performers begin disappearing and bodies are found mauled by an invisible beast. Mara realizes that there’s a sinister presence lurking in the town with its sights set on getting rid of the sideshow freeks. In order to unravel the truth before the attacker kills everyone Mara holds dear, she has seven days to take control of a power she didn’t know she was capable of—one that could change her future forever.Bestselling author Amanda Hocking draws readers inside the dark and mysterious world of Freeks.

Beneath that were several smaller signs warning “Enter at your own risk. The creatures inside can be DISTURBING and cause NIGHTMARES.”
The entrance to the left was open, but the exit door at the other end was still shut. Wearing a pair of workman’s gloves, Hutch was pulling at the door with all his might. His neon green tank showed that his muscles were flexed and straining in effort. The bandana kept his dark brown hair off his face, but sweat was dripping down his brow.
“Let me have a try, Hutch,” Roxie said.
“What?” He turned to look back at her. “Door’s stuck.”
“I can see that. That’s why I said let me have a try.”
“Okay.” Hutch shrugged and stepped back.
Hutch’s real name was Donald Hutchence, but nobody ever called him anything but Hutch. He didn’t have any special powers, unless you considered being really agreeable and easygoing a super power, so, like me, he was left doing whatever else needed to be done.
Roxie grabbed the door and started pulling on it, and when it didn’t budge, I joined her.
“Luka, go and push from the inside,” Roxie commanded through gritted teeth.
Both Luka and Hutch went inside, pushing as Roxie and I pulled. And then all at once, the door gave way, and we all fell back on the gravel. I landed on my back, scraping my elbow on the rocks.
Roxie made it out unscathed, and Hutch fell painfully on top of me, so he’d avoided injury. Luka crashed right on the gravel, though, and the rocks tore through his jeans and ripped up his knees and the palms of his hands pretty badly.
“Do you need me to get a Band- Aid or anything?” Hutch asked as he helped me to my feet.
“No, I’ll be okay.” I glanced over at Luka and the blood dripping down his knees. “What about you? Do you want anything?”
“Nah. Just give it a few minutes.” Luka waved it off and sat down on the steps leading up to the museum door.
No matter how many times I saw it, I couldn’t help but watch. His knee was shredded, with bits of gravel sticking in the skin. Right before my eyes, the bleeding stopped, and the rocks started falling out, as if pushed by his flesh, and the skin grew back, reattaching itself where it had been little mangled flaps.
Within a few minutes, Luka’s knee was healed completely.
Copyright © 2017 by Amanda Hocking and reprinted by permission of St. Martin’s Griffin.
~~~~****~~~~****~~~~

This is the first book I have had the chance to read by Amanda Hocking and I have not been disappointed.  Amanda has created a unique world in which you don’t want to leave.
Caudry is a town that has every person in the travelling carnival on edge and with iffy powers.  They are also contending with a mysterious creature attacking the players and animals.  Then there is Gabe who met and fell for one of the carnies on their first day in town but he has a secret.  Will everybody survive long enough to leave town?  Will we learn Gabe’s secret in the end?  Will a relationship form in the end?
I was dragged into this story without a second thought.  I fell in love with the characters and the way of life these people live.  I love the plot too.  What I truly loved was the fact that she has written a book that you didn’t want to end because you just had to find out what happened next.  There was always some new mystery to pop up.
I have fallen in love with this author and this book.  I was tossed into a world of supernatural beings that was so freaking amazing.  I will definitely be grabbing more books by this author as soon as I can.
5 freaky stars