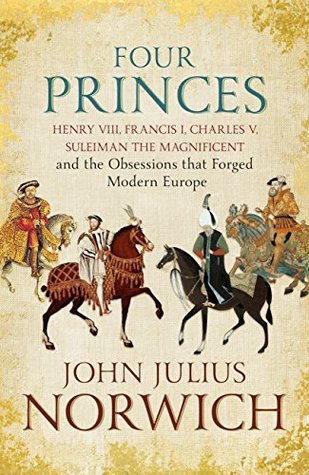 In Europe, 1491 to 1500 was an exciting time to be alive. The entire continent was overshadowed by four rulers, all born within a ten-year period:


King Francis I of France, the most interesting of the quartet, bursting with energy and swagger, was a great patron of the arts and the personification of the Renaissance.
King Henry VIII of England—who was not born to be king but embraced the role with gusto—broke with the Roman Catholic Church, and made himself head of the Church of England.
Charles V, Holy Roman Emperor, the most powerful man in the civilized world, obsessed with the religious disputes of Europe, was leader of the Spanish and then Roman Empire.
Suleiman the Magnificent, the richest of them all, stands apart as a Muslim, who brought the Ottoman Empire to its apogee of political, military, and economic power, as well as to the golden age of its artistic and architectural prowess.
Never before had humankind seen such giants coexisting. Against the rich background of the Renaissance, they laid the foundation for modern Europe. Individually, each man could hardly have been more different. Their mutual relations shifted constantly: often they were actively hostile and occasionally they were friendly. There was a healthy respect between them; never did one make the mistake of underestimating another. And together, they dominated the world stage.

So this book follows the lives of FOUR princes of Europe and tells the story of their rulings coincided with each other.  It tells about how they influenced each other and worked together.

I love learning about things like this but struggle to get into non-fiction books, this book was no exception and while I struggled through reading it, it was most definitely worth it.  I really struggled with the flow of this book.  It would not have been bad if things had been better organized.  Each chapter was really long and consisted of information on each prince without indication that it was talking about somebody new.

I enjoyed the writing style and learning about the princes as a whole.  It truly was an informative book.