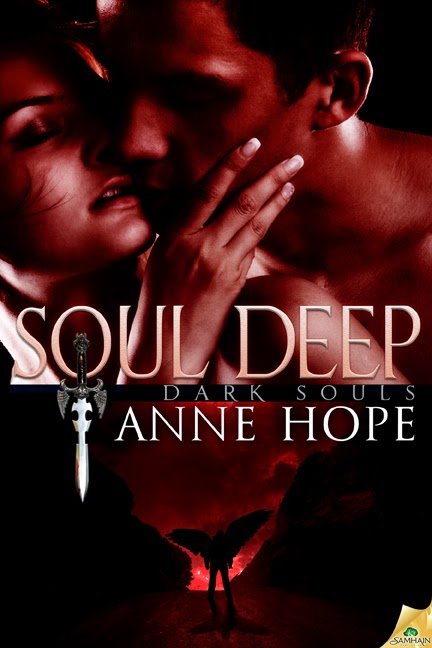 Blurb:
"Save her life or save mankind. His choice could cost him his soul. "

For nearly two centuries, Marcus has been the Watchers most faithful soldier. Sworn to protect humanity, driven by an unrelenting compulsion to atone for past sins, he has rarely found a compelling reason to question his mission, let alone defy his leader.

His partner, Regan, is his exact opposite, an enigma he longs to solve. A free spirit and reckless to a fault, Regan acts first and thinks later. Her smart mouth and tender heart have fascinated Marcus for decades, but the Watchers strict vow of celibacy has forced him to ignore the sizzling attraction between them. Until now.

When Regan goes rogue to protect a very special little boy, Marcus is forced to make an impossible choice commit an act of treason or watch the woman he secretly loves die.

Hunted by enemies and allies alike, Regan and Marcus run for their lives, fighting to thwart an age-old prophecy and guard a boy whose destiny may very well be to destroy the world or save it.

Warning: Contains violent battle scenes, angels with twisted agendas, nail-biting suspense, intense emotion, burning-hot sexual tension, and a sexy, stubborn hero who would rather face death than admit what s in his heart.

Marcus found Regan standing at the top of one
of the numerous cliffs that barricaded the Watchers’ complex, staring down at
the sea, her features pinched with concentration. The rain had finally stopped,
but dampness still hung in the salt-laden air. A thin mist hugged her feminine
figure, making moisture bead on her skin. She looked intangible, as elusive as
the fog encompassing her. Regan was so strong and capable, he sometimes forgot
how delicate she was.

The sight of her standing so close to the
edge triggered all his protective instincts, and something else—the forbidden
desire to touch. “Penny for your thoughts,” he said, burying his fists in his
jacket pockets, where they wouldn't be tempted to stray.

She smiled but didn't turn to look at him.
“Is that all they’re worth?”

“You drive a hard bargain. How ’bout a
quarter?”

She laced her arms across her chest as the
sun slowly set behind red-hued clouds. “What’s going to happen to him, Marcus?”

He didn't have to ask her who she meant. Ever
since they’d found Ben cowering in that kitchen, the boy had dominated her
thoughts, maybe even her heart. Marcus had never believed it was possible for
their kind to love, but recently he’d been forced to revisit that assumption.
He’d seen it firsthand with Jace and Lia, and now he was seeing it again with
Regan. Maybe one didn't necessarily need to have a soul in order to love. Maybe
just the echo of it was enough, similar to a phantom limb that continued to
throb long after it was severed.

“Cal hasn't come to any decisions yet,” he
told her.

A brisk breeze blew, sending her curls
rioting around her face. Again, he was seized by the urge to reach out to her,
to smooth back her hair, to run the pad of his thumb across her mouth.

A mouth meant to be kissed.

He gave himself a mental kick, focused his
attention on the churning waves below. He had no business kissing Regan. No
business even thinking about it. When he’d taken the blood vow, he’d made a
conscious choice to swear off sex, same as all those who bore the Watchers’
mark.

Only Jace and Lia seemed exempt from this
oath, and Marcus couldn't for the life of him figure out why. He’d seen Cal
punish his followers for far less a crime. If there was one thing his leader
demanded, it was absolute loyalty.

Regan picked up a pebble, then flung it over
the cliff into the restless ocean. “Do you believe in destiny?”

The question took him off guard. “I’m not
sure. I know Cal swears by it.”

“I didn't ask about Cal. I asked about you.” She
ran her fingers through her hair, exactly as he’d imagined himself doing.
“Cal’s always preaching about fate, and for the most part, I believe him. But
deep down, there’s this inkling of doubt, and it gets me thinking sometimes. If
everything really is preordained, what happens to free will? Does it even exist
or are we just being strung along?”

“When did you go all philosophical on me?”

She inhaled deeply, drawing his attention to
the gentle swell of her breasts. Ignoring the kick beneath his ribs, he looked
past her, fixing his gaze on the rocky shore again.

“I don’t know,” she said. “I’ve been having
this feeling lately, like there’s something I’m supposed to do, but I’m not
sure what that is. I only know it involves Ben. He’s important somehow.”

He’d been having the same feeling, but he
refrained from telling her. The last thing he wanted was for her to grow even
more obsessed with the boy. In their world, obsession and impulsiveness often
spelled disaster.

“Regan, you need to trust Cal to do the right
thing. You know the drill—no Watcher can deviate from the plan. If you do
anything, anything that compromises the mission, you will be labeled a Rogue.
And you know better than anyone how the Watchers deal with Rogues.”

They hunted them down and exterminated them.
The idea of that happening to Regan tore a painful strip out of him. He’d spent
too many years training her, working alongside her, fighting to keep her alive,
to lose her now. Had she been capable of reading his thoughts, she would've
argued that she was the one always bailing him out of trouble, and she would've
been right. She’d saved him more times than he could count. They were a team,
more in tune than most, able to regenerate each other with nothing more than a
touch, thanks to the Watchers’ bond.

The truth was, he couldn't picture his life
without her.

Losing the battle, he clasped her arms and
turned her to face him. “Promise me you won’t do anything stupid.”

She tensed at his touch, inclined her head to
look at him. “Define stupid.”


Those sweet-looking lips hovered inches below
his, too damn appealing to ignore. Right there and then, standing at the edge
of a deadly overhang ensnared by Regan’s smoky gaze, Marcus understood the
precise meaning of stupidity.

He was tempted to demonstrate, but he didn't.
Releasing her, he secured a safe distance between them. “Just think before you
act. That’s all I ask.”

She visibly deflated, and he could’ve sworn
disappointment momentarily flittered across her face. Above them, the sun’s
dying rays struggled to pulse against a sky determined to suffocate them. Regan
grabbed another pebble and sent it whizzing through the air with a note of
finality. “Thinking is overrated.”

A bitter laugh rumbled in his
throat. If he wasn't so damned disciplined, he would've agreed. 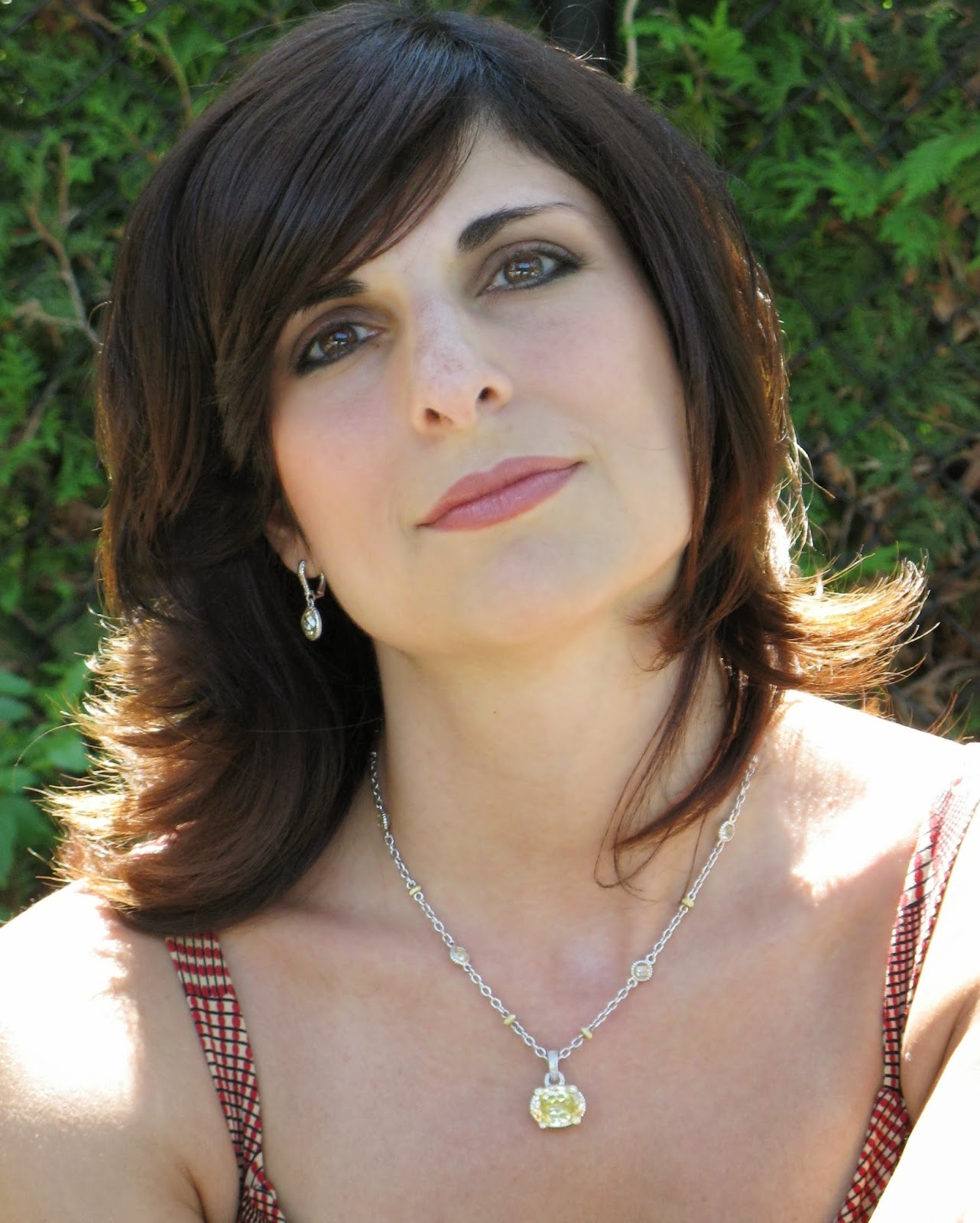 Anne Hope is the author of emotionally intense romances with a twist—a twist of humor, a twist of suspense, a twist of magic. All her stories, however, have a common thread. Whether they make you laugh or cry or push you to the edge of your seat, they all feature the redeeming power of love and the heart's incredible ability to heal.

Anne's passion for writing began at the age of eight. After penning countless stories about enchanted houses, alien girls with supernatural powers, and children constantly getting lost in the woods, she decided to try her hand at romance.

She lives in Montreal, Canada, with her husband, her two inexhaustible kids, a lazy cat and a rambunctious Australian Kelpie.