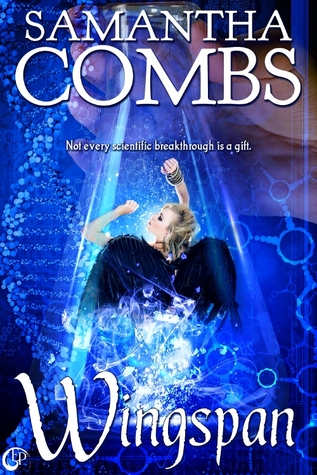 Chessa Dawning never thought she’d be on the run. Yet, she was, having left the only home she’s ever known, staying two steps ahead of the men chasing her and falling for a resourceful ex-criminal with colorful friends.
Most of the time, Charlotte Lake can’t believe her life. The reluctant leader of a rebel faction called the Ginger Nation, Charlie’s days are filled with planning surveillance, rescuing detainees, and exposing government conspiracy. Surrounded by loyal friends and soldiers, she knows she can never reveal the true nature of her quest: finding her real father.
When a sudden twist brings the two girls together, revelations about the past will make them rethink where they came from and define the future in ways they never could have imagined.
Not every scientific breakthrough is a gift.

Samantha Combs is a Southern California author with ten published books: Her Young Adult paranormal titles, the Global Ebook Award-winning debut title SPELLBOUND, SPELLBOUND's sequel, EVERSPELL, GHOSTLY, WATERDANCER, THE DEADLIES, and WINGSPAN, a middle grade horror called THE DETENTION DEMON, and her adult horror collections, TEETH AND TALONS, WAY PAST MIDNIGHT and HELLOWEEN. She enjoys writing YA paranormals, both dark and light, and supernatural fantasy and romance, but it is her love of horror that started it all. Thanks, Mr. King.
When she's not writing, she works full time and enjoys spending time with her husband and two children. Her guilty pleasures include reality television, the Food Network channel and shoes. She truly believes she can accomplish anything if she has the right pair of shoes. And she adores totally inappropriate earrings.
Samantha loves writing and publishing her work and is in awe of the technological advances of our lives. With all of the genres there are for a reader, she has learned that writing paranormal and horror lets her share all the weirdness of everyday life in a not-so-everyday way. The foundation of a good story is all around her. All she has to do is....breathe.