There's Something About Nik Review... 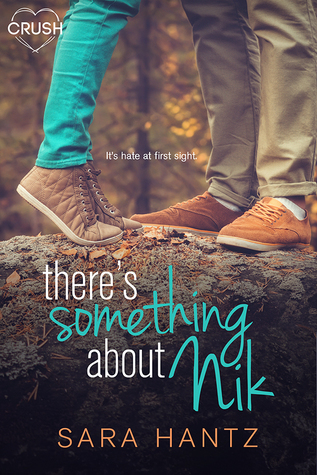 He’s just the son and heir to one of the most important families in Europe—one where duty always comes first. And his posh, too-public life is suffocating him. So when he gets the chance to attend boarding school in America, pretending to be an average exchange student is too big of a temptation to pass up.

Then he literally runs into Amber on campus. And she hates him at first sight.

It’s kind of exhilarating to be hated for who he is, not for his family name or his wealth. Maybe if he turns up the charm and turns down the aloof mask he habitually wears, he can win her over. Even though a bad past experience has made her swear off dating this year.

But the more he gets to know her, the more uncomfortable he is keeping things from her.

Because Nik Gustafsson has a secret. And it’s a big one.

Disclaimer: This Entangled Teen Crush book contains a hot boy who's the strong and silent type, a studious girl who refuses to believe in fairy-tale romance, and one epic secret that could be disastrous if it comes to light.

This reminded me a lot of the first Prince and Me movie.
Nik is from an royal family in a not well known country but for the next year he is going to school in the States.  He never expected to fall in love and all he wanted was to live a normal life for that year.  But you can’t always get what you wish for can you?
I absolutely adored this book.  I love the characters for the most part.  There were a few moments where I really disliked each of them in turn because they did something really stupid or something just didn’t make sense.  I found the plot enjoyable as well, but there were moments where I got confused or lost by something.  There were moments where the book lagged and then picked up the pace again.  The flow was really good though.  I also really enjoyed the authors writing style.
This is another author that I would love to read more books by.  I enjoyed every second of this book.  I think this book is great for both the teens and adults (obviously…but I don’t like to claim being an adult).  There are even some subtle lessons in this book if you look closely.
5 royal stars!!!
Posted by Ashley at 11:30 PM