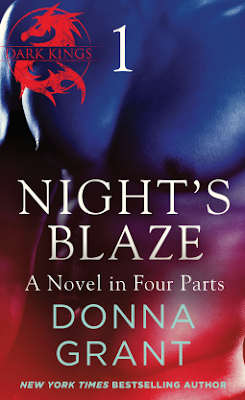 NIGHT'S BLAZE (The Dark Kings): Part I is the first in an exclusive four-part e-series by New York Times bestselling author Donna Grant!

Did she have any idea how he fought not to go to her? How it went against everything he was not to take her and make her his?

Rhys is a king who walks in darkness. However, an innocent kiss from one woman slayed him as nothing in his very, very long life had ever done. It physically hurt for him to tear his lips away from hers--and to turn his back on her for eternity. But can a Dark King ever forget the pleasure, the cost, of true passion? One woman is about to put him to the ultimate test…

While the story is good it isn't fantastic for me.  I kept losing track of the characters and who was with who.  As this is the first book it was basically just setting up the rest of the books so it was a lot of background information.  I did truly enjoy it I was just hoping for more from it.  I struggle through fantasy anymore but it intrigued me enough to get through and want to keep reading. 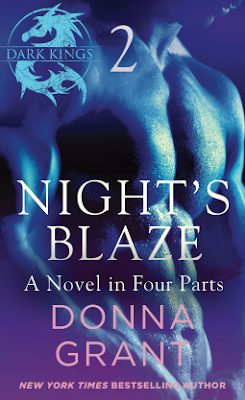 He was virile, persuasive, and masculine. His rugged good looks turned heads, but in a suit, he looked dashing and powerful. A combination no woman could ignore. And he was sitting next to her. Lily wanted to run her fingers through his long, dark brown waves and pull his head down for a kiss. And if he didn't quit looking at her as if he wanted to take her right there, she just might.


Lily Ross is taking the first step in building a new life for herself. Still reeling from a relationship that nearly broke her spirit, Lily is wary of her attraction to brawny, brooding Rhys. The passion burning so brightly between them is a potent temptation, but any entanglement is destined to end in disaster. Yet when a spectre from Lily's past threatens their growing bond, Rhys is forced to choose with his heart, or lose this woman who has become his one chance at salvation...

This is book two of the serial and it is getting a little bit more interesting with a little bit more backstory for the main female character of the story, Lily.  By the end of this book she has started to shed her old life.  The main male character, Rhys, is also coming to terms with his future.  I am still struggling through the story from a fantasy point of view but I am slowly falling in love with the series.  Can't wait to dive into book 3 and see what happens to these two characters. 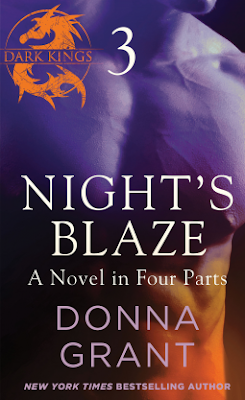 Lily forgot to breathe. She reacted instantly, desire tightening, coiling within her until her chest heaved. Rhys wasn't just sexy. He was the god of sex, skilled and proficient in the many ways to bring a woman to her knees with a seductive smile.

"If I go back in that bed, I wouldn't ever want to get out."

Rhys' grip tightened on her waist. "Is there anything wrong with that?"


As their newfound passion blazes, Rhys is determined to know Lily, body and soul. But as their lust burns hotter, danger looms closer. Yet as Rhys and Lily stand together to protect the growing intensity between them, one troubled past-and a powerful secret-could tear them apart forever...

Now we're talking.  As we dive into book 3 things are picking up and I started to love the characters even more than I thought possible.  In this book Lily is fighting between her choices of what to do?  Should she help her ex get what he wants or does she continue to let go of the past.  Rhys doesn't know what Lily is hiding in the beginning and she doesn't know about him at all.  Closer to the end of the book everything comes out and things get twice as good.  I am extremely excited to finish this series with book 4!!! 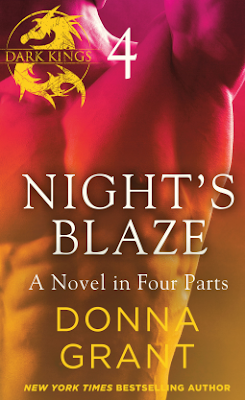 They are men of danger, desire, and dragon magic. As old as time itself, this race of shape-shifting warriors have kept the balance of worldly power in check. But when a certain breed of woman enters the picture, the future becomes an unknown entity. . .

NIGHT'S BLAZE (The Dark Kings): Part IV is the thrilling conclusion to the e-series by New York Times bestselling author Donna Grant!Rhys scrubbed a hand down his face, his mind rushing through every nuance of his plan. Every turn was danger for Lily. It made him break out into a sweat. He couldn't lose Lily. She was the only reason he could face each day. Without her...he was nothing.

Lost in breathtaking passion, Lily and Rhys burn for each other. Yet not all is well. As a destructive force moves to destroy the bond growing bond they share, Rhys is forced to make a choice that will change their lives irrevocably: Lose the woman who has become his salvation? Or be consumed by desire...


Read all four parts of this sensational novel-and look for the full volume of Night's Blaze in April 2015 from St. Martin's Paperbacks.

REVIEW:
HOLY CRAP!!!  This book is well worth the so so previous books.  This book has just about everything.  I loved it and couldn't put it down.  I finished it in what felt like 20 minutes but it was probably an hour.  I worried for a little bit that it wouldn't have a happy ending but that was silly.  I loved the series and honestly I want to learn more about these characters.  I will have to keep my eyes open for the rest of the series because while it was an extremely slow start it was well worth the wait for the last book!