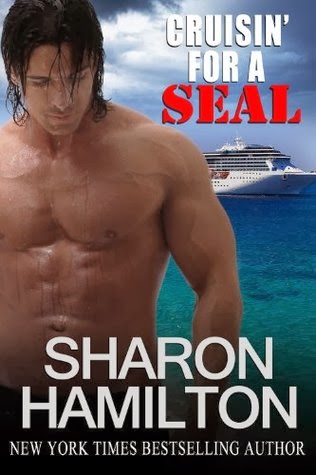 Cruisin' For A Seal
(SEAL Brotherhood #5)
By Sharon Hamilton

Marc Beale and several of his brothers from SEAL Team 3 board a cruise ship to bury a fallen buddy's aches at sea. A risky affair with a beautiful Italian the night before they leave begins to ease his survivor’s guilt.

Sophia Negri, suffering jitters over her engagement, falls for the handsome SEAL and pretends she speaks no English, letting their bodies do the talking. When Marc finds her on the ship and learns Sophia is half American, he is angry at first, but falls for her all over again as they set sail.

Terrorists take over the ship and hold the passengers for ransom, Marc and the other SEALs are the only ones who can stop the plot. Will Marc’s actions be enough to save Sophia or will he have to sacrifice himself to save the woman he loves?

A lifelong organic vegetable and flower gardener, Sharon and her husband live in the Wine Country of Northern California, where most of her stories take place.

You can find Sharon at