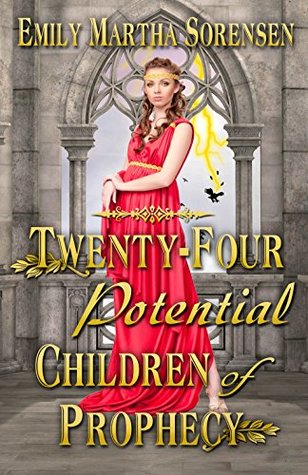 Henina tends to irritate people. She can't help it — she's bad at shutting her mouth. So when a prophecy is made that someone will stop the war, she figures she's the worst possible choice. Too bad. The Fates have their sights set on her, and it will take all her cleverness and quite a lot of offending the king to foist the prophecy off on somebody else instead. But she can do it. After all, there are a lot of potentials to choose from.

I feel like this book was rushed and lacking something.  I didn’t feel like I was getting the whole story I think.
The book follows twenty four women/kids who were basically kidnapped by the king because they had some form of star mark on/near their hands.  All because of a prophecy that says said person would end the war.  They are all taken to the war front and asked to find a way to end the war.  They eventually come up with a plan of their own to get themselves and their drafted family members home again.
The characters were interesting but lacking.  They needed more depth I think.  They plot was good but it didn’t catch my attention like I thought it would.  I thought it flowed decently and the pace wasn’t bad but it could have used some work as well.  I didn’t feel like I was involved in the book at all.  It just didn’t capture my complete attention.
So while I wasn’t captivated by the book it was a decent story.  I would recommend it because everybody has different tastes in books.  It was still worth the read in my book.
3 stars!