Eliza and Her Monsters Review... 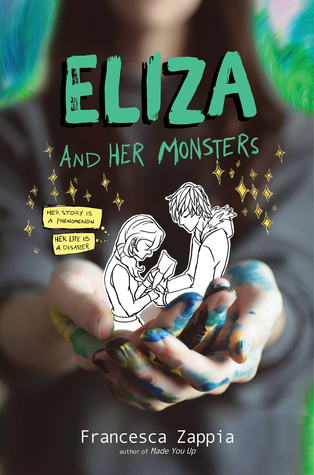 Eighteen-year-old Eliza Mirk is the anonymous creator of Monstrous Sea, a wildly popular webcomic, but when a new boy at school tempts her to live a life offline, everything she’s worked for begins to crumble.

In the real world, Eliza Mirk is shy, weird, smart, and friendless. Online, Eliza is LadyConstellation, the anonymous creator of a popular webcomic called Monstrous Sea. With millions of followers and fans throughout the world, Eliza’s persona is popular. Eliza can’t imagine enjoying the real world as much as she loves her digital community. Then Wallace Warland transfers to her school, and Eliza begins to wonder if a life offline might be worthwhile. But when Eliza’s secret is accidentally shared with the world, everything she’s built—her story, her relationship with Wallace, and even her sanity—begins to fall apart. With pages from Eliza’s webcomic, as well as screenshots from Eliza’s online forums, this uniquely formatted book will appeal to fans of Noelle Stevenson’s Nimona and Rainbow Rowell’s Fangirl.

Eliza and Wallace were a lot like me in High School.  I hid from the world and wrote my stories.  I had friends but didn’t really tell anybody a lot about myself.  Eliza has secluded herself in school and doesn’t let anybody in.  She spends her time in the chat rooms and message boards for her story MonsterSea and writes it as LadyConstellation.  Then she meets Wallace who is a fan of her work.  He is transcribing her story into a book series and doesn’t know that it is her work.  Can these two keep their secrets or will everything come out?  Will Eliza make it through High School without her secret identity being uncovered?  What could possibly go wrong?
I enjoyed this book because it reminded me a lot of myself at that age.  I liked the characters and they were relatable.  I enjoyed the plot and it flowed well.  However, I thought it started out really slow.  The pace did eventually pick up and continue at a decent pace.  The writing style was amazing.
I do feel like it left off at a decent spot but there could also be room for a sequel if the author wanted to follow Eliza to college.  All in all it was a great book and I look forward to reading more by this author at a later time.
4 stars
Posted by Ashley at 12:00 AM