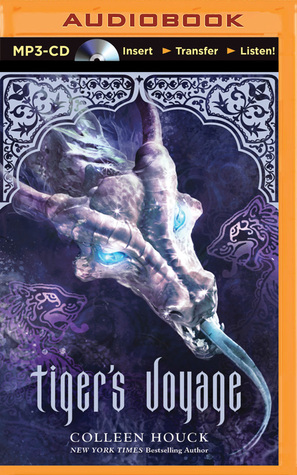 Five mythical Chinese dragons and the open sea beckon nineteen-year-old Kelsey who must embark on a third voyage — this time to find the goddess Durga’s Black Pearl Necklace and free her beloved Ren from both the tiger’s curse and his sudden amnesia. Ren’s bad-boy brother, Kishan, however, has other plans, and the two vie for her affection and try to outsmart those intent on foiling their goal.
Tiger’s Voyage, the third book in the Tiger’s Curse series, spins a deliciously suspenseful tale of enchanted creatures, love-torn hearts, and edge-of-your-seat action as Kelsey, Ren, and Kishan journey toward their true destiny.

I have read this book many times and each time I pick out something different that I never noticed before.  I adore this series and am super excited for the final book to come out later this year which is why this current re-read is going on.

In this book Ren is dealing with his amnesia of not remembering Kelsey.  Kishan is trying to help Kelsey through the heartbreak she is dealing with.  Kelsey is just trying to deal.  But once Ren gets his memory back it's too late because Kishan and Kelsey are now dating.  Then there is their quest!  Oh what an adventure they embark on with dragons, sharks, kraken, mermaids and more.  How does this adventure end?  Is there another vision between those holding medallions?  Are people kidnapped?  Who is left in the end?

I am a huge admirer of mythology and to read up on India's mythology in this way is always fun.  I would love to see more books revolving around this particular area of mythology.  It would never compare to this series because this series also involves my all time favorite animal Tigers and the young men who turn into them.  Colleen has created a world with these books that you never want to read.  I have re-read them so many times now (5 or 6 times each) and I always find something of interest that I didn't notice before.

I enjoy these characters immensely and to see the world they live in and relate to.  This book has always been the hardest for me to get through.  While it is an amazing book I feel like the pacing runs a bit on the slower side at the beginning.  Then once you start the quest of this book things start going faster.

I look forward to finishing this series and already have the final book of the series on pre-order!  I also look forward to reading her other series revolving around Egyptian mythology which I have all of in audio book and some of in hardback.  Colleen is an author that I would read without reading the descriptions.  If you have not read this series then you absolutely should.