My name is Brooke Barker…


And I’m a freaking disaster.

No, seriously. I’m a college drop-out working a dead-end job, my best friend Carly’s dog gets more action than I do, and I have more bad dates in my diary than there are movie remakes.

Not to mention I’m completely and utterly in love with Cain Elliott.

The problem? He’s in a relationship. With a girl who’s so plastic she makes Barbie cry herself to sleep with jealousy.

Being Brooke is a standalone romantic comedy. Hilarious, super-sexy, and possibly highly inappropriate at times, this is the perfect feel-good read!

Cain’s phone begins to buzz on the table. The screen lights up, and the short name on the screen makes me have to fight a frown.
I know it’s Nina. It always is. It’s like she has a Brooke-dar. She can sense whenever Cain and I are alone and hanging out.
My heart sinks, slowly but heavily, and I school my expression into one of not caring. I refuse to look away from the TV now.
Cain hands me his pizza box, which I take, begrudgingly, then he leans forward and grabs his phone. He waits for the buzzing to stop, then unlocks it and turns it off vibrate.
Then? Then he shoves it under the table, screen down.
Ho. Lee. Shit.
I gape at him. I can’t help it.
A piece of pepperoni drops off the slice of pizza in my hand—the same one that’s frozen halfway to my mouth as I stare at him in total disbelief. Did he really just do it?
“What?” Cain shrugs and takes his box back, grabbing a piece of half-eaten, meaty pizza and shoving the end in his mouth. The crust crunches as he bites down.
I swallow and glance at the coffee table. “I don’t think you’ve ever not taken a call from her.” I can’t help the derogatory way I say ’her’. It’s not intentional—honest. It’s ingrained in me to be vicious to other women. I think it’s a female thing. Self-preservation and all that.
“I don’t think I ever haven’t either.” Cain tilts his head to the side and meets my gaze, a suspicious glint in his green eyes. “But the point is, we haven’t done this in weeks, and I’m having too much fun to leave. Besides, we have all this junk food. If I don’t help you eat it, you’ll eat it all, then it’ll be my fault when your pants don’t fit.”
Oh my god.
“Does she know you’re here?” I smirk slyly and raise my eyebrows.
He shifts uncomfortably. With a cough, he puts his pizza down and grabs his beer bottle to swig from it.
Oh. My. Shitty. Life.
“She doesn’t, does she?” I sit up straight, throwing my half-slice back into my box and shoving his shoulder. “Cain!”
“No,” he mumbles, scratching the back of his ear. “She doesn’t know.”
I laugh. I can’t help it. It’s totally immature of me to delight in the fact he hasn’t told the Prissy Princess where is he and he’s ignoring her calls, but I do. It’s hilarious.
And, okay. I’m smug. Totally smug. There’s only one reason he hasn’t told her, and that’s because she hates me too.
Bitchy Best Friend Mission: Level Up!
“And tell me.” I snicker, just about holding back the volcano of laughter threatening to erupt. “Where does Nina think you are?”
“She thinks I’m at Mom’s.” He looks at me, his lips flattening into a thin line. “Stop laughing, B. No, don’t shake your damn head. I fucking mean it. She’s a little insecure over my friendship with you and Carly, that’s all. Sometimes it’s easier to just tell a... little white lie.”
“A little white lie? She thinks you’re at your mom’s!” I laugh harder and wipe at my eyes because they feel a little too wet.
“I just want the best of both worlds right now, all right?”
“What is the best of both worlds? Pizza with me and blow jobs from her?”
“She chooses not to eat gluten. Until she finds a gluten-free recipe she likes, I can’t eat pizza when she’s around.”
Which is a lot.
I raise my eyebrows again. “Your girlfriend won’t eat gluten but she’ll happily put your dick in her mouth?”
“Brooke. Don’t be a bitch.” He chucks a piece of chicken from his pizza at me, his eyes narrowing.
I’m dying. I think this is it—this is how I die, laughing at Cain’s lame excuses for lying to his girlfriend about spending time with me.
“Oh my fuck. This is hilarious. Seriously. Someone call Comedy Central.”
“Brooke.” He says my name again, this time quieter.
I stop laughing. Just about.
“I’m sorry. I just think it’s funny. You want me to be nice to her but you lie to her about spending time with me.” I shrug a shoulder and peel a piece of pepperoni off my pizza. I’m not even that hungry anymore.
He sighs, putting the top down on his box, and sits back. “She thinks there’s something going on between us.”
I laugh even harder because I might cry if I don’t.
Hi, breaking heart. Grab the tissues, yo.
There’s an awkward silence hanging between us now. It’s not the first time someone has thought that, but given that the more time I spend with Cain, the more I seem to fall for him, it’s awkward. Especially since he’s lying to her just to hang out with me.
I clear my throat and look up at him. “That’s ridiculous. You’re my best friend. Like anything would ever happen between us. I can’t put up with your shit taste in music, for a start.”
“Exactly,” he replies in a quieter voice, scratching behind his ear again. “It’s fucking stupid. I can’t stand your taste in music either. Who the fuck likes Justin Bieber?”
“People who think Kanye West should retire.”

Welcome to my life!  Brooke is me.  As I am reading this book I am literally sitting there picturing myself as the main character.  There were a few things that have not actually happened in my life but for the most part every single thing in this book has happened to me or is currently happening to me.  I actually had to stop reading for a while because it was just too much.
Needless to say I loved the story.  I loved the characters.  I have yet to find an Emma Hart book that I don’t enjoy though.  She is among my favorite authors since I read my first book by her.  However, I have to say that while I enjoyed the book I did have a little issue with the pace.  It just seemed to go slower than the books she usually writes.  All in all it is well worth the read and I can’t wait to another one of her books soon.
4.5 stars 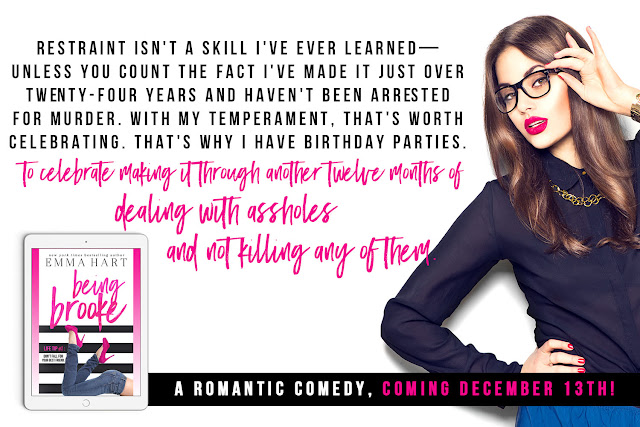 By day, New York Times and USA Today bestselling New Adult author Emma Hart dons a cape and calls herself Super Mum to two beautiful little monsters. By night, she drops the cape, pours a glass of whatever she fancies—usually wine—and writes books.


Emma is working on Top Secret projects she will share with her followers and fans at every available opportunity. Naturally, all Top Secret projects involve a dashingly hot guy who likes to forget to wear a shirt, a sprinkling (or several) of hold-onto-your-panties hot scenes, and a whole lotta love.
She likes to be busy—unless busy involves doing the dishes, but that seems to be when all the ideas come to life.