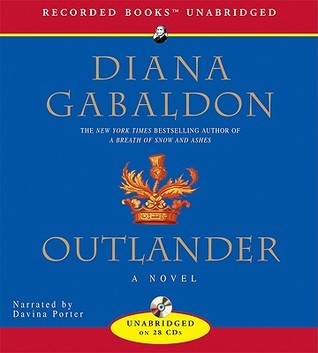 Unrivaled storytelling...unforgettable characters...rich historical detail...these are the hallmarks of Diana Gabaldon's work. Her New York Times bestselling Outlander novels have earned the praise of critics and captured millions of readers. Here is the story that started it all, introducing two remarkable characters, Claire Randall and Jamie Fraser, in a spellbinding novel of passion and history that combines exhilarating adventure with a love story for the ages...

Outlander
The year is 1945. Claire Randall, a former combat nurse, is back from the war and reunited with her husband on a second honeymoon--when she walks through a standing stone in one of the ancient stone circles that dot the British Isles. Suddenly she is a Sassenach--an "outlander"--in a Scotland torn by war and raiding Highland clans in the year of Our Lord...1743.

Hurled back in time by forces she cannot understand, Claire is catapulted into intrigues and dangers that may threaten her life...and shatter her heart. For here she meets James Fraser, a gallant young Scots warrior, and becomes a woman torn between fidelity and desire...and between two vastly different men in two irreconcilable lives.

Swooning, swooning hard.  So I got the audiobook out of the library in October.  When I realized I wouldn’t be able to finish the audio book in the allotted time I bought the e-book and the audible read along.  I already have book two lined up.  Now when I got the audio book from the library they had Season 1 Part 1 so I grabbed that too.  I had barely gotten into the book when I had finished all available seasons (1 & 2) and am hoping to be caught up on the books before season 3 comes out.
So if you couldn’t figure it out it took me a little over a month to listen to this book because I basically only got to listen an hour a day in the car and it’s like 24+ hours long, I also only listened when I was in the car alone (nobody else enjoys audio books).  There were honestly days where I would sit in my car to finish listening to a chapter when I got home.  I can’t put into words how good it was.
Now as I said already, I got through all of Season 1 before I made it through the book.  I was extremely pleased with how well the show followed the book.  Of course a few things were changed, probably for either effect or for the graphicness of the scene.
This book pulls you in from the first book and hooks you.  The characters are vivid and fun.  I felt drawn to Claire and I really want a Jamie in my life.  The plot kept you hanging on and coming back for more.  The pace and flow were amazing.  However, the book definitely left me wanting more, even though I know the basic plot of the next book because of the tv show.  Now obviously this is not a series I would recommend for anybody under probably the age of seventeen, even that is pushing it in my book.  However, if they watch the show then why not have at the book too, because it’s basically the same.
I look forward to continuing the story of Claire, Jamie and learn more about their friends and family.  I have the e-book and audible read along for book two all set and ready to go.  I just have a couple other books to get through before I dive into another month long read…lol.
5 outlandish stars