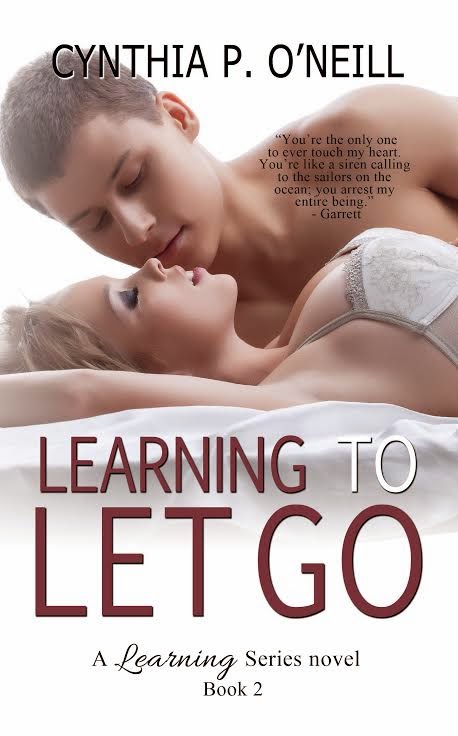 Blurb for Learning to Let Go:

Whatever he wanted, he took, especially when it came to Laurel Hart. She was the first person to make his heart skip a beat and capture his soul, allowing part of his control to slip, which uncovered his lie and destroyed her trust in him.

Laurel now lays battered and broken thanks to Chase Peterson, a stalker from her college days, who won’t accept no for an answer…

Garrett is determined to win her back, obsessing over her care in an attempt to heal both her body and her mind.  He will go to any lengths to earn back her trust and teach her to let go of the past, but can he follow his own advice and let down his own walls?

They struggle to overcome their issues and soon Chase is after her again, fixated on staking his “claim” with a startling revelation that links both the past and present.  Can they find happiness with each other or is their too much to overcome?

Only time will tell if they can…
learn to let go…

I was just about to succumb to sleep when I heard Laurel scream in terror.  I bolted through the door first and saw her upright in bed screaming, “Leave me the hell alone, Chase! Get off me!  You’re hurting me!  Stop NOW!”

Her arms were in a protective stance around her, swinging fiercely through the air, trying to connect with her imagined target, but her eyes were still closed.  Oh, God, she’s having a nightmare of the attack!  I’d hoped her mind would avoid this.  I knew what it was like to relive an event that tore at your heart and soul night after night, eating up every part of your mind until you felt like you were going to implode.  She may not want my help, but she was going to get it!  I couldn’t let her suffer through what I did as a child.

I took a tentative step towards her, speaking in soft tones. “Laurel, you need to open your eyes for me,” I whispered. “You’re having a bad dream and need to wake up.”

Her body stilled at the sound of my voice and she started to cry, so I rushed toward her, pulling her tight against me, holding her while her tears flowed.

Several sets of footsteps came rushing through the door all at once. Everyone was asking, “How is she?  Did she have a nightmare?  Is she going to be okay?”

I felt her flinch against me at the onslaught of questioning.  I leaned in toward her ear and whispered, “You want everyone to leave?”

My heart was ready to burst with joy when she barely uttered, “No.”

I held her tight with one arm as the other shooed everyone out the door.

When the door closed, she finally looked up at me. The amount of fear in her eyes told me we had a long battle ahead of us.  “Do you want to talk about it?” I asked.

Her eyes bugged out and she shook her head.  She began to open her mouth, stuttering the words, “I-I… I can’t…not yet.”

“Would you like to come to my room?  I can prop you up on some pillows and can keep you as close as you’d like. There’s room for both of us in my bed, and I promise I’ll do nothing more than hold you while you sleep.”

I could tell she was thinking about it and sighed deeply as she answered, “Okay.”

If her dreams were anything like the ones I had after my parents died, I knew she would wake often during the night and need someone she could reach out to.  I pulled her covers back and carried her to my room. Her eyes went wide, taking in the sight of my king-sized walnut bed, decorated with the same burgundy patterns as her bed in Waters Towers.

“I happen to prefer dark, rich colors, too,” I said as I slid her underneath the covers and gently kissed the top of her head.  “Are you comfortable?”

She nodded.  “Thank you.”  Her voice was soft, but still shaky from her ordeal.

I went around to the other side and pulled on a t-shirt.  Just holding her body against my bare chest made me so hard that I could hardly stand it.  I needed a barrier between our skin to get through tonight.  This was going to be difficult, at best, but I would put all thoughts of pleasure aside and focus entirely on helping Laurel recover.

Her eyes watched every move I made as I pulled the shirt on and climbed into bed.  I was there beside her with just our arms touching, silent and still, when her voice broke with a soft whimper.

I turned to my side and pulled her up against me, cocooning her with my own body.  “Shh, baby. You have nothing to fear now. I’ll protect you with my life. Always.”  I smoothed a few stray hairs behind her ear. “You need your rest.  I won’t let any of those dreams, or him, ever harm you again.”


I watched in fascination as her breathing slowed and she finally drifted back into a gentle slumber.  After a couple of hours, I drifted off too, content to have the one person who touched my forbidden heart back in my arms again. 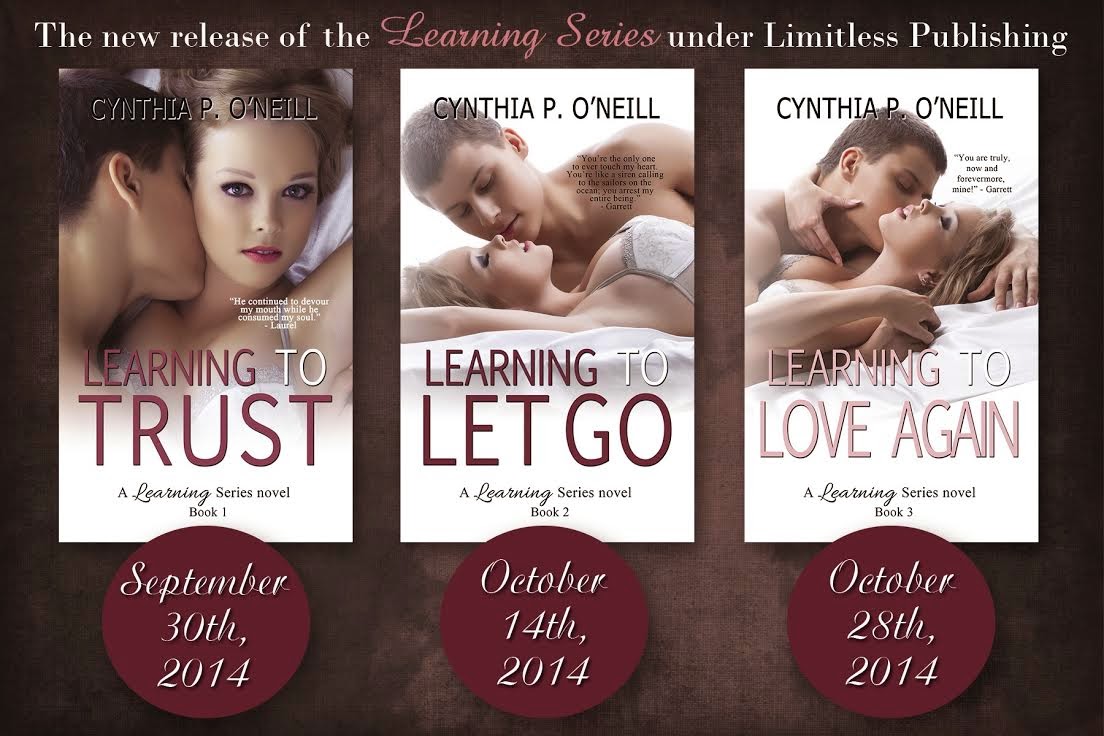 I grew up in a small town in South Florida called Clewiston and moved to Central Florida to attend college.  I married my friend, love, and soul mate and still reside in the area with our amazing son, and a feisty, four-legged little doggie boy.
In my books, I draw on my background in healthcare, business, and science, along with my husband’s engineering and wireless technology knowledge.
I currently write on all levels of Romance.   The Learning Series is for those who like a little more steam with their books, falling into the categories of Contemporary and verging on Erotica, with a hint of Suspense.  The Remembrance Series encompasses Young Adult, with a touch of Paranormal activity and a hint of Historical romance. A new contemporary romance series is underway, called Need.  It will be different than the others, because each book will focus on a new couple, while the other characters will still have a large presence throughout the series.
I try to make my writing very personal and close to her heart. Regular life is the inspiration for my books, but I'm only limited by imagination taking ideas to new heights, opening up possibilities that would normally not exist.
On a more personal note...I love to cook and create in the kitchen and on the bbq grill.  I sometimes lose myself in a song at the piano.  I often sing with my son while we are driving or making dinner together.  I enjoy crafts (flower arranging, making wreaths, painting pottery, needle point and drawing in pencil and charcoals).   My music tastes are eclectic at best, ranging from classical piano to hard rock/heavy metal.  It all depends on the song, group, and if it has a good beat or is a soulful ballad.
To learn more about me, feel free to check me out at www.cynthiaponeill.com. 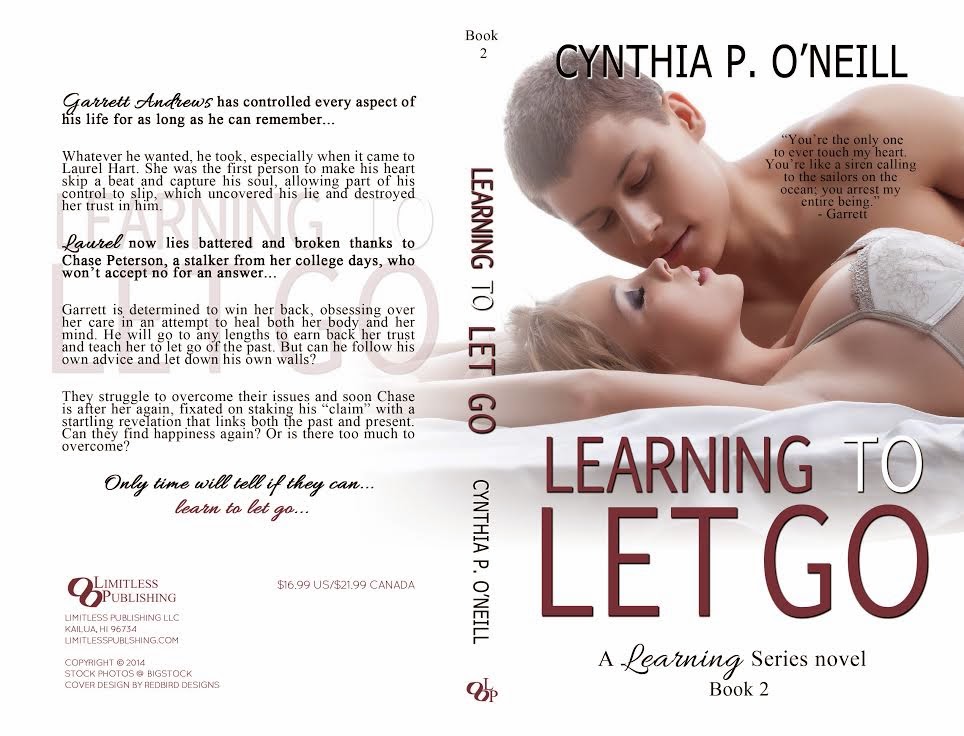