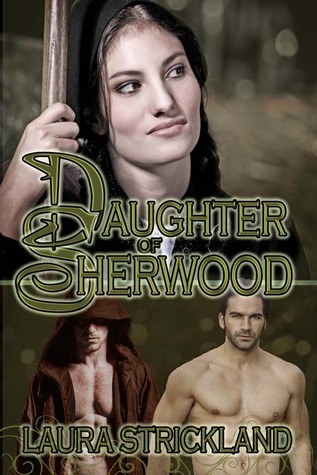 Raised in the kitchens of Nottingham Castle, Wren has no idea she is the daughter of the legendary Robin Hood until she is summoned to Sherwood Forest. Since Robin's death many years before, the resistance against Norman tyranny has been upheld by a magical triad, but now one of the guardians has died. With two young men, Sparrow and Martin, Wren must form a new triad with a bond strong enough to defend Sherwood's magic. To one of them, she will also give her heart.
From the moment Wren bursts into his life, Sparrow loves her. But he knows she may choose his lifelong rival, Martin, as her mate. Martin wants Wren also, but Sparrow fears Martin is driven not by love but by ambition. When Martin is captured and held at Nottingham Castle, will the conflict between love and duty destroy the triad?

Wren is the daughter of Robin Hood and Marian.  However she is almost an adult before she learns about it.  Now after an accident with one of the Sheriff's men she can't stay in Nottingham any longer.  But she now has two men vying for her attention.  Can she follow in her parents footsteps and protect the people of Sherwood?  Will she make the right choice between Martin and Sparrow?  Will they all survive?

Wow!  I am a huge fan of the Robin Hood legends and have collected a few of them.  I loved the idea behind this book.  It was a fun and different take on the story of Robin Hood.  I thought the story was unique and different.  The book seemed to move kind of slowly for me.  The characters were dynamic and well formed as well.

This is the first book based on the Robin Hood legend that I have read from my collection.  I enjoyed the unique tale that follows the daughter of Robin Hood.  I can't wait to read the other books in this series.  Another amazing new author has been added to my list.