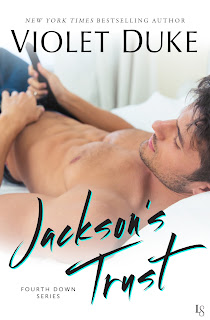 New York Times bestselling author Violet Duke kicks off her fun and sexy new Fourth Down series with a heartwarming friends-to-lovers romance between a no-strings-attached sports analyst and the hottest damn tomboy he’s ever met.

It’s no secret that sports analyst Jackson Gray doesn’t do relationships. What is a secret, however, is the reason why. Jackson’s life is . . . complicated. And it doesn’t help that his current hands-off “friendship” is with the cute-as-hell new sideline reporter he’s assigned to train. Turns out, not only is the woman damn sweet, she also knows as much about football as he does. Like it or not though, Jackson has to remind himself that sex is the only thing he has to offer . . . until now.

Leila Hart’s fast-growing friendship with Jackson is something she’d never risk, no matter how unbelievably seductive the reward. Becoming an NFL sportscaster has always been the goal, and thanks to Jackson’s fierce support and mentoring, it all finally seems within reach. Problem is, a girl can only take so much of that sexy-as-sin voice whispering dirty, filthy football stats in her ear before she loses all self-control. A workplace romance with Jackson is a disaster waiting to happen, especially for someone with big dreams . . . and secrets of her own. 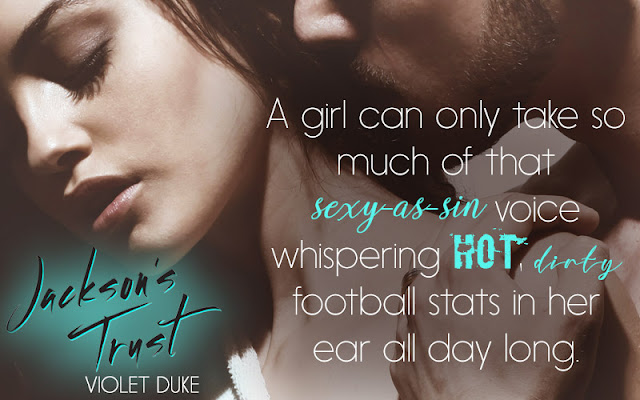 “I love this hotter side of Violet Duke…still sweet & emotional, but with a bit of extra sizzle.Jackson’s Trust is a must-read.” -- New York Times bestselling author Sawyer Bennett 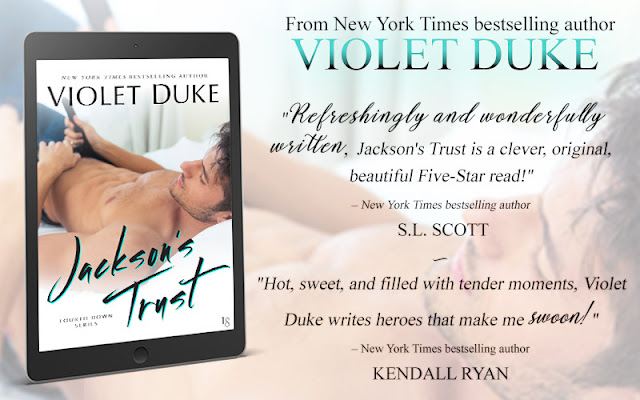 “My life is . . . complicated.” Jackson broke his gaze away from her. “A relationship would be doomed to fail from the start.”
He sounded genuinely disappointed. Almost wistful. The way her grandmother had sounded years ago when her doctors told her she had to change her diet to cut out sweets, her favorite thing ever.
His eyes found hers again. “Funny thing is that I used to be one of those guys who figured he’d have a kid or two by now. Cute hell raisers who’d help me spoil their mom on Sunday mornings, that sort of thing.” Doting affection filtered into his tone. “And vice versa. A partner in crime who’d help me plan surprises for the kids that would be so stinkin’ adorable that I’d max out the memory on my phone taking photo after photo.”
Good grief, she was pretty sure one of her ovaries just fainted.
Leila had the sneaking suspicion that she was going to fall for this man. Hard. “So because of your secretly complicated life, you only date women who want . . .”
“Sex.” His eyes stayed glued to hers as he dropped the one word like a bomb. “Just sex. At their place, not mine.  Occasionally, with lunch or dinner as well, but never breakfast.”
Wow.  That was the very definition of just sex, alright.
“That honest enough for you?”
Yep. That worked. Did it settle her curiosity at the moment? Unquestionably. Did it get her to want to widen the number of spaces between them on the game board?
Not so much.
She watched him watch her reaction to his answer, and gave him the smile she knew he wasn’t expecting. Along with the follow-up she knew he really wasn’t expecting. “So you flirting with me earlier was you picking up on some sex-only, no-breakfast-in-bed vibe I have going on?” she teased. “That’s a pretty powerfully accurate gift you got there, Skippy.”
Aaand they were back to standing on the same square on the game board.
“Sunshine, why do I get the feeling you don’t really have a boyfriend?”

Jackson found his palms flat against the wall on either side of her shoulders before he could stop himself. And yet he did nothing to remedy what was surely a bad decision on his part, work-wise. Instead, he just watched her, and waited for an answer.
Leila’s gaze pulled away from his a moment later, and dropped down to his tie. While her teeth sank into that lush lower lip he’d been fascinated with since yesterday, she reached out her free hand to straighten and smooth out his tie.
Oddly, the unbidden action was a penetrating fist to his chest. He hadn’t been lying about having had more than a few passing thoughts of a wife and kids to spoil. And this tie-straightening? It belonged right there in the vault with all the other untouchable daydreams for his life.
When her lips parted then, instead of an answer, he got another question. “Why do you insist on calling me sunshine?”
“You don’t like it?”
“I’d rather you call me by my name.”
Exhaling slowly, he admitted, “Me too. Which is why I’m sticking to sunshine.”
Eyes still glued to his tie, she resumed her distracting lip biting, looking as reflective as she did amused. “So does that mean I shouldn’t call you Jackson?”
Holy shit, he liked the sound of his name on her lips. Too damn much. “Call me Jackson.” It wasn’t a reply to her inquiry. It wasn’t even a request. It had edged over to a demand… 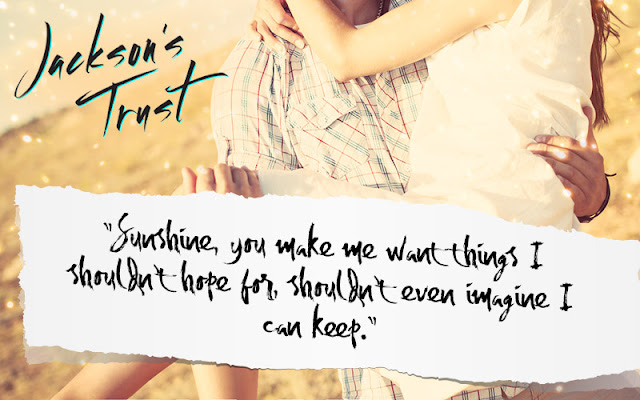 Oh Jackson and Leila where can I read more about you.  I swooned and fell hard for these characters.

Leila Hart is a politician's daughter who wants nothing more than to be accepted by her parents and make her own path as a NFL newscaster.  Jackson Gray wants nothing more than to stay out of the limelight.  He's happy where he is but when things change he comes out as heir to a million dollar company.  He doesn't want to deal with the corporate world and she doesn't want anything to do with the political world.  Can these two get past the secrets?  Can they form a lasting relationship?

Oh my goodness, I loved this book.  The characters were great.  The plot was amazing and I loved how it started with you thinking they were just coworkers and then throws in the secrets of their lives.  The flow and pace were on par.  The writing style was fabulous.  I loved every second of this fabulous book.

Violet invites you into a world that is fun and unique.  She pulls you into the story where you expect one thing and end up somewhere completely different.  I felt like I was a part of this story and can't wait to see what the rest of this series is like.  I will definitely be looking for more great reading material by Violet Duke because she is an amazing author. 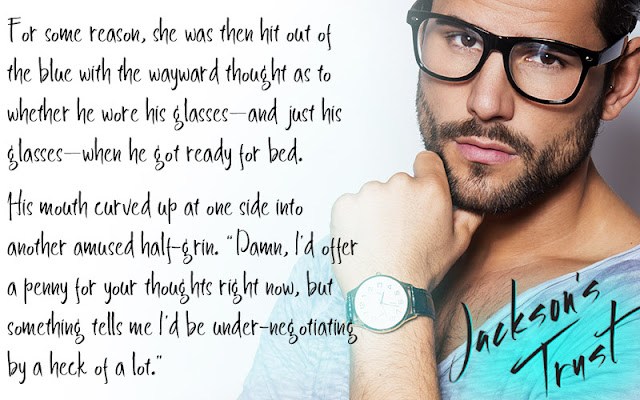 
NEW YORK TIMES & USA TODAY bestselling author Violet Duke is a former professor of English Education ecstatic to now be on the other side of the page writing wickedly fun contemporary romances filled with strong, unique heroines and memorably romantic heroes. With just under a million books sold to date, since becoming an author in 2013, Violet has appeared on the USA Today bestseller list thirteen times and the NYT bestseller list three times, with the additional honor of charting in the Top 10 across the major eretailers both in the U.S. and internationally.

When she's not feeding her book-a-day reading addiction, Violet enjoys tackling reno projects with her power tools, trying pretty much anything without reading the directions first, and cooking impossible-to-be-duplicated 'special edition' dishes that laugh in the face of recipes. A born and raised island girl, she spends her days in Hawai'i chasing after her two cute kids (daughter Violet & son Duke) and similarly adorable husband (their ringleader).