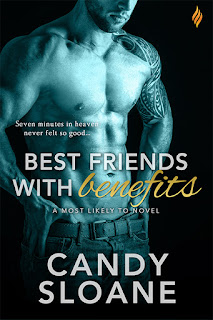 Valerie Barkin and Alec Rogers survived bullies, awful parents, and seriously shitty social standing the only way best friends can—together. But with the unexpected sexual tension suddenly flaring between them, surviving their ten-year high school reunion might be a different story…

Val hasn’t changed. She still feels like the stringy-haired band geek the popular kids teased, but Alec has definitely changed. He’s now the front man for the Grammy-winning rock band Chronic Disharmony, with the sexual reputation to match. And he’s more than willing to help Val rock the reunion.

And then it happens—a drunken game of Seven Minutes in Heaven—and their fourteen-years-long foreplay comes crashing to the forefront…changing everything.

Seven minutes turns into a weekend of mind-blowing, no-strings-attached sex. But these best friends won't be able to leave their hearts out of it forever, not when the most meaningful benefit could change their relationship for good....

Val and Alec have been friends their entire lives.  Alec has made a name for himself in New York as a musician.  Val hasn't changed much at all.  So when they see each other in person for a weekend at a high school reunion sexual tensions run high.  Can they both give into their desires and let go enough to move forward?  Can they make this last?

I enjoyed the idea behind the story however I felt the story itself was lacking something that I can't put my finger on.  The characters seemed to be well formed.  The flow and pace were decent.  In my opinion the characters were the best part of this book.  You get to delve into their lives and see their struggle.  I didn't completely feel like a part of the story though.

All in all it was a good read.  This is the first book by Candy Sloane that I have read and while I wasn't completely thrilled with the book I would still give any of her books a chance.  She created an amazing selection of characters.  I needed the story to go a little more in depth but well you can't have a perfect book every time.  Like I said I love the idea behind the story I just needed more.

Candy Sloane is a pseudonym for a Young Adult & New Adult author who needed to write some naughty books her mother couldn’t read. She lives in Portland, OR and loves Lifetime movies. She would tell you more, but this persona is a secret.