Toying With His Affections Review... 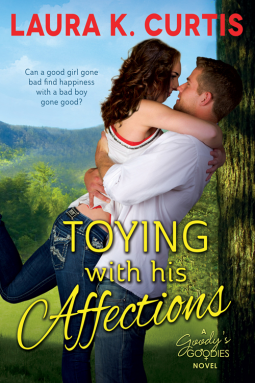 Evie Bell couldn’t wait to get out of the small town that had labeled her a goodie two-shoes. She dreamed of showing her more daring side. Selling sex toys might not have been the career she envisioned when she left Fairview, Tennessee, to become a Las Vegas showgirl, but she’s proud of her hard-earned success. Now, forced to return to the town she’d hoped never to see again to care for her ailing aunt, she will need every bit of that pride to get along with those who disapprove of her way of life.


Griffin Barstow was given a choice at eighteen: jail or the military. He chose the military. Now he’s come home to Fairview to run for sheriff. But small towns have long memories, and the last thing he needs while trying to convince voters he’s turned his life around is an attraction to a completely inappropriate woman.


Evie would like to avoid Griffin entirely. Her aunt, however, is in financial as well as medical trouble, and Evie must take on the job of making her aunt’s shop more profitable the only way she knows how—by adding a touch of sex appeal. And when vandals make their disapproval of her changes evident, she needs the law on her side. When sparks begin to fly between Evie and Griffin, both will have to decide whether they can overcome the problems of the past to make a future together.