Boomer Steele is big. He’s bad. He’s the Retribution MC pres. He’s been dealt the worst hand imaginable and bears the scars inside and out. Not that anyone knows it. He’s watched his younger brother and sister hook up and hitch up with the loves of their lives, and now he’s the last Steele standing alone. Maybe he should keep it that way.
Then one feisty honey makes him feel, gets in his grill, pisses him off.
She goes by the name of Rayce. And that’s exactly what she does on her motocross bike when she’s not busy getting her hands dirty with her fellow grease monkeys as the only female mechanic at Stone’s Garage. She’s into fixing bikes, racing hers, and making Boomer’s life a living hell just for the fun of it. Oh, and she hates being treated like a girl.
Sparks flying? That’s an understatement where these two are concerned. Yet when Rayce needs a place to live, and Boomer offers her a room in his house, their unquenchable attraction wins out over antagonism. Sometimes. Rayce’s crappy upbringing makes her think love is for stupid fools asking for heartbreak. She’s not willing to go there for any man. Not even Boomer Steele.
The bigger they are, the harder they fall.
~~~~~~~~~~~~~~~~~~~~~~~~~~~~~~~~~~~~~~~~~~~~~~~ 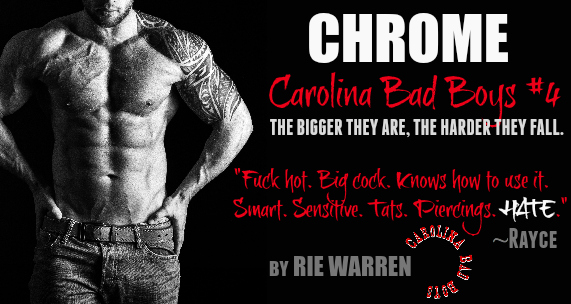 The Tattooed Moose was no more than a noisy, loud, crowded wood shack with a tiny front porch just on the wrong side of the tracks in downtown Chucktown.
Romance?
Maybe not. But the food was un-freakin’-believable.
It was a little quieter on the porch than in the bar, so I snagged the first empty table and got Rayce settled in her seat before I moved mine right next to her. Large outdoor heaters spaced between the tables fought off the January chill.
“This okay?” I reached for her hand and rubbed across her knuckles, smiling when I noticed the engine oil she hadn’t quite managed to scrub off.
“Is there beer and food?”
“Some of the best of both, I guaran-damn-tee it.”
“Then it’s okay by me.” Pulling my hand up to her face, she gently licked and kissed the center of my palm.
I kid you fucking not, the feel of her lips made my cock go full throttle just like that.
This softer side of Rayce was something else.
The seductive side?
Goddamn hypnotic and horny as hell.
I returned the favor of turning her on by licking and nuzzling her neck while we waited for our orders. I was bound and determined to give her that orgasm tonight. Hopefully in my bed, but I could work it out in the truck, or hell, even in the nearest deserted alley.
Rayce moaned under her breath when I bit down on her earlobe, and I decided that would do for now.
She looked at me with wide, dazed, dazzling eyes. She hadn’t even noticed the beers had arrived.
Job well done on my part.
I pecked her on the lips then lifted my glass.
She broke out of the sex-spell and muttered a low string of words I didn’t quite catch but went along the lines of evil man . . . all worked up . . . sits there smirking.
Then she clinked my glass with a, “Bottoms up.”
“We can get to that later too, if you want.” I took a glug of beer.
She choked on hers, hitting me on the shoulder.
After she managed a swallow without spewing beer across the table, she turned to me. “How can you just say stuff like that?”
“Because I’ve been thinking about it?” I shrugged.
“But I haven’t—” She shook her head and lifted her drink again.
I scooted closer and whispered in her ear, “Haven’t had a hard cock inside your perfect ripe ass?”
She shivered as my lips caressed her earlobe, and she swallowed hard.
“I’ll take that as a no.” Laying my palm on her thigh, I skimmed up it until I butted the center seam of her jeans. “Some women think it’s really hot, especially with the piercings. Really gets ’em going.”
Her nose skimmed my cheek as she turned her head. Her lips nearly collided with mine. “And just how many women have you done it with?”
“Well, that doesn’t matter, princess, because none of them mattered.” That may have sounded crass but it was true. I’d had my fair share of fucks—none of them lasted.
My lips brushed hers. “But you matter, make no mistake about it. It’s just a thought if you wanna give it a shot. I’d make sure you like is so much you come crawling back for more.” Sitting back, I crossed my arms over my chest, my big thighs spread in obvious invitation.
All for her and only her.
She stared at me, her cheeks growing more and more flushed until, groaning, she buried her head in her arms.
I gave a rough low laugh, reaching over to caress the back of her neck and the tiny buttercup tat.
She peeked out at me. “You’re a very naughty man.”
“Your naughty man.” I kissed her cheek and she sat up with a huff. 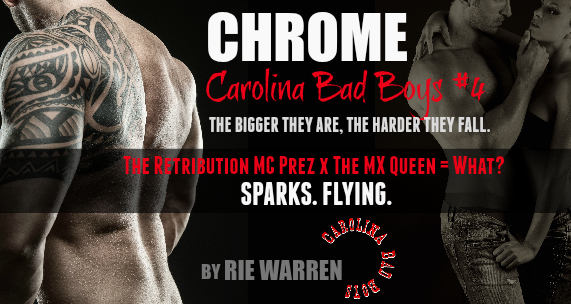 REVIEW!!
I have read almost this entire series (including the spin-off).  I have loved everything about the characters portrayed throughout this series.  This book is no exception.
This book follows Boomer and Rayce.  Rayce has a life that nobody would envy.  All Boomer wants is to get her away from the life she has.  When he finds out the true extent of what happens in her life he takes action.  Secrets are spilled, lives are ruined and happiness comes out on top in this book.
I love the stories that come from these characters.  The plots are well formed and full of life.  The characters are absolutely amazing and intriguing.  The books usually start slow but pick up the pace around the middle of the book.  This one is no different.  Great characters, great story and plot, and interesting pacing.
I highly recommend this book and can't wait to read about more of these characters.  It can be read as a stand alone but I highly suggest that you start from the beginning because details from both the Carolina Bad Boys and Bad Boys of Retribution MC series come up in this book.  I missed the book before this one and in the Carolina Bad Boys series and felt like I was missing things throughout this book and the Bad Boys of Retribution series.
4 Steele Stars
~~~~~~~~~~~~~~~~~~~~~~~~~~~~~~~~~~~~~~~~~~~~~~~

Rie is the badass, sassafras author of Sugar Daddy and the Don’t Tell series–a breakthrough trilogy that crosses traditional publishing boundaries beginning with In His Command. Her latest endeavor, the Carolina Bad Boys series, is fun, hot, and southern-sexy.
A Yankee transplant who has traveled the world, Rie started out a writer—causing her college professor to blush over her erotic poetry without one ounce of shame. Not much has changed. She swapped pen for paintbrushes and followed her other love during her twenties. From art school to marriage to children and many a wild and wonderful journey in between, Rie has come home to her calling. Her work has been called edgy, daring, and some of the sexiest smut around.
You can connect with Rie via the social media hangouts listed on her website https://www.riewarren.com.