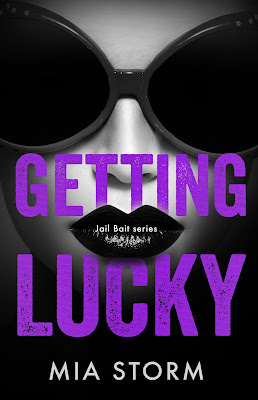 Raised in the system, Shiloh Luck’s first sixteen years have been anything but lucky. After winning The Voice, she’s finally living the dream—a record contract, talk shows, a North American tour opening for the
hottest band out there. Everything is going according to plan...until their frontman, Tro Gunnison, explodes her life into chaos. He’s shallow, self-centered, and completely infuriating, and he’ll do anything for notoriety. Including her. Like it or not, she’s stuck with him for three months on the road, but the longer they spend together, the more she begins to realize there’s more to Tro than anyone has ever dug deep enough to find. If his attention is anything other than just another publicity gimmick, she might let herself see where it leads. But before she can risk everything, she has to be sure.

If there’s one thing that Tro Gunnison has learned in the six years since he left his past in the dust, it’s that living life big, bold, and totally outrageous keeps people from seeing past the glare. He’s buried his demons beneath six feet of sex, drugs, and rock and roll, and he’s convinced no one will ever dig them up…until Lucky. She’s young, but not naive, and without
even trying, she sees past the facade to the man underneath…which scares the hell out of him. Because what started out as smoke and mirrors has somehow turned real, and for the first time in his life, there’s someone he cares about more than himself. But it turns out getting Lucky could be a double-edged sword.

He’s always been sure it would be his past that would bring him down, but it might turn out to be Jail Bait instead.

One. Two. Three deep breaths, pumping myself up for what comes next. People I’m supposed to smile at. Questions I’m supposed to answer wittily. Hundreds of eyes on me that I’m not supposed to be affected by. No big deal that if I fuck up and say the wrong thing, game over.

The deep male voice rumbles through me, smooth in the middle but rough all around the edges.

My eyes snap open and my gaze darts through the backstage gloom as a dark form materializes out of the shadows next to the stack of crates I’m sitting on. The red cherry of a lit cigarette glows a streak across the dim as he lifts it to his mouth and takes a long drag. As the glowing tip brightens, it illuminates a mass of dark curls that stick up at every angle and appear to only ever have been combed by the multitude of women’s fists that have been twisted into them. Thick dark brows arch over deep-set eyes so intense I’m convinced I feel them burning a hole through mine. A slightly crooked nose leads my eyes to a square jaw covered in dark scruff, and a pair of firm red lips that are currently smirking at me.

I nearly fall off my crate. He’s the guy every woman in the world wants to fuck right now. His nude Rolling Stone cover last fall made sure of that. He’s outrageous in everything he does and notorious for the long list of celebrity hearts he’s left broken in the two years since Roadkill exploded onto the music charts.

My eyes trail down the tattoos on his neck to the black T-shirt covering what I know is an incredible body. (Yes, I’ve seen the Rolling Stone cover.) But I catch my wits and pull my eyes away, refusing to give him the satisfaction of seeing me ogle. I’ve spent enough time around his type in the last few months to know that’s what they get off on.

He blows out a long stream of smoke and stalks around to the front of my crate, leaning his elbows onto it and staring up at me. “Then I’d be compelled to ask why.”

“And if I told you it was none of your fucking business?” I challenge.

His mouth pulls into a crooked smile and a little bit of devil flashes in his dark eyes. “Then I’d think you’re not only hot, but mysterious too.”

A sudden whoosh of butterflies in my chest sends a rush through me that tightens my groin. I mentally crush them into dust because I’m not letting Tro Gunnison turn me into some swooning groupie. I’m way the fuck smarter than that. Growing up in the system means you grow up fast. I know how the game is played, which makes me hard to play. If I fuck him, it’s going to be on my terms.

“Whatever,” I say with a roll of my eyes.

“You’ll be at the show tomorrow?” he asks, taking another drag off his cigarette. “I could get you backstage.”

I feel my eyes start to widen with my surprise and stop them. He doesn’t know I’m his opener. Guess he’s too fucking high and mighty to concern himself with the rabble and hangers on. But when I get past feeling a little pissed off, I realize something about him not recognizing me is liberating.

I lean back against the wall and decide to have some fun with it. “What show?”

He gives me a curious look—the same one I nearly gave him a minute ago. But then his eyes rake down my body and the corner of his mouth curves into that devilish smile again. “Better idea. What are you doing right now?”

I can hear them doing sound checks on the other side of the wall, which means they’ll be ready to tape our segment in a few minutes. They’ll be calling for us any second. “Working.”

He drops his smoke and grinds it out with the heel of his biker boot, then pulls a pack of Dentyne Fire from his pocket and offers me the open end. I slide out a stick and fold it into my mouth.

He does the same then shoves the pack back into his pocket. “C’mon.”

I slide to the edge of the crate. “Where we going?”

“Somewhere that’s not here,” he says, holding out his hand to me.

A wave of nostalgia makes me shudder. This feels like something me and Lilah would have done back in the day. I know it sounds backward, but I miss no one giving a shit about me. I miss doing whatever I wanted whenever I wanted. Now that I’m everybody’s paycheck, they monitor everything I do. Image is everything, after all.

I hop down and take his hand, feeling more than a little dangerous as he leads me toward a door at the back of the sound room. He glances over his shoulder at the crew scrambling around the fringes of the set before punching the panic bar.

“No alarm. That’s good,” he says, stepping through.

“Shiloh!” I hear Billie call from somewhere backstage. “You’re on in three!”

Tro tows me into through the door into a dimly lit storeroom without slowing down. Course, he has no clue that Billie was calling for me. Tro’s supposed to be out there too for our segment, and if I didn’t know he’s probably going to catch more shit than me for this, I’d be shaking.

“What’s your name?” he asks as he strides past racks of props and stage gear, my hand still in his.

“I’m Trotte.” He glances back at me, where he’s towing me along like a dingy. “Don’t ask.”

“Tell me about your name,” I say with a smirk when he ducks behind the shelves in the back of the room.

He spins me up against the wall and pins me there by the upper arms. “I’ll give you the whole story only if you trade me something for it.”

About the Mia Storm:

Mia Storm is a hopeless romantic who is always searching for her happy ending. Sometimes she’s forced to make one up. When that happens, she’s thrilled to be able to share those stories with her readers. She lives in California and spends much of her time in the sun with a book in one hand and a
mug of black coffee in the other, or hiking the trails in Yosemite. Connect with her online at MiaStormAuthor.blogspot.com , on Twitter at @MiaStormAuthor, and on Facebook at www.facebook.com/MiaStormAuthor
Posted by Ashley at 11:10 PM