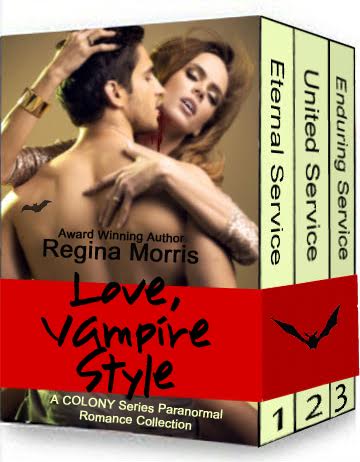 A covert group of sexy vampires protect the President of the United States. Paranormal Romance series.

ETERNAL SERVICE - Heartbroken widower, and vampire coven master of the covert vampire group that protects the President, Raymond learns that the human director for his team is retiring. The replacement is a human female operative who has no idea that vampires exist. Due to a threat against the President, Raymond is forced to quickly indoctrinate her into vampire culture. He struggles with reborn romantic feeling even though he has sworn never again to pursue a human woman. The female operative, Alex, accepts the Director position, all while battling her past baggage of not trusting men, let alone large immortal ones. Passion emerges within her, but to remain the Director of the team, and keep the dream career position she has fought for many years to attain, she must remain human with no romantic ties to the team.

UNITED SERVICE - Sterling Metcalf is a modern-day vampire who clashes with his father’s antiquated ideals. Being the half-breed of the Colony group, Sterling hates being the team’s weakest link. He jumps at an opportunity to do some fieldwork rescuing kidnapped vampire children and is accompanied by Kate Spencer, the nanny of one of the children. Kate is a purebred vampire with a secret of her own. Can Sterling put aside his bad-boy ways and woo the lovely Kate? Will Kate accept the advances of a half-breed? Together, can they save the children from a religious cult who wants to kill them?

ENDURING SERVICE - Colony Agent Sulie Metcalf, the President’s private physician, has been in love with the same human man for nearly thirty years. She refuses to allow herself the joy of true love because her feelings are unrequited by her human boss, Jonathan Dixon. As Dixon’s retirement looms near, and his memories of Sulie and the last thirty years of his life are about to be erased, does she confront her fear of intimacy and take a leap of faith before it’s too late? Dixon has decided to retire and enjoy what time he has left. When his best friend Sulie, a vampire team member, is kidnapped during a medical emergency, Dixon realizes that retirement means giving up everything, and everyone, he’s known for the last three decades. Will he risk his life, and his heart, to save her? 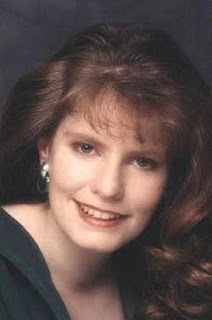 Regina Morris is an award winning author and an Amazon Top 100 Bestselling Author (in the categories of Paranormal, Vampire, Romantic Series and Romantic Comedy) for her suspenseful paranormal romances that make up the COLONY series. She loves paranormal romances featuring vampires, but her personal taste is suspenseful and lighthearted – not horrific and gory.

The White House, the President, and Washington D.C. are merely backdrops to support her romance stories. They offer some suspense, but her books are romances and not political thrillers.

She has lived in many different parts of the world, and grew up on military bases. Her father was career military and CIA; her grandfather worked with the Secret Service. She graduated high school in Germany and she attended the University of Texas at Austin where she received a degree in Computer Science with a minor in math. Her specialty is social media and she loves connecting with people.

She lives in Austin, Texas with her husband, two children, and two puppies. She enjoys meeting with her critique writing groups and meeting other writers in the Austin area through the WLT and Austin RWA events.

Besides writing, she has past work experience as a software engineer (current job), public speaker, sales representative (#1 National Sales Rep for an online company years ago), and is an amateur portrait and sports photographer.

Please connect with her through various social media.  http://www.reginamorris.com

One Page Teaser from Eternal Service

Raymond smiled at Alex. It was a beautiful smile, not fake or forced. You can always tell when a smile is real. His black colored eyes held the smile, not just his luscious, full lips. Alex noticed his hair remained a bit damp, probably due to a last minute shower on his way over. His hair parted on the side tonight, and a curl of bangs hung lopsided onto his forehead. It gave him a Superman appearance. She always did like Superman.
Alex knew her pulse sped up as she took in the visual strip tease in her mind. She thought back to their earlier conversation. Humans and vampires could have sex together. Sex. She swallowed hard. She hadn’t thought of having sex with a man in a long time. Her heart sped up even faster. She wondered if he could hear the beats. If he did, he didn’t show any reaction. He just sat sipping his wine, looking sexy as hell.
Her hands still held her wineglass, so she took a gulp of wine, hoping to squelch the heat she felt within her. Instead, the drink fueled the flame. Would sex with a vampire be different than with a human? If there were a difference, she was betting it would be better. The sexual relationships she had in the past, if she could remember that far back, were moderately satisfying. Definitely not romance novel, page turning, steamy… but satisfying.
Blinking a few times, she realized she was staring at his crotch. Could she be more obvious? She knew in her heart that she was going to take this promotion. She couldn’t start a romance with a team member, it wasn’t professional. She wasn’t that type of woman. Plus, there was no guarantee that he was interested in her such a way. He had treated her with nothing but respect.