The 8 Mistakes of Amy Maxwell Review... 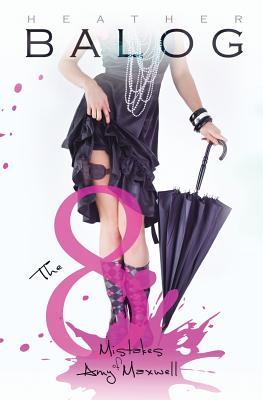 Amy Maxwell’s got four kids, a useless husband and crusted applesauce on her yoga pants that haven’t seen the inside of a gym in over a decade. She’s convinced her teenage daughter is up to no good, her ten year old can’t stop chattering in her ear and her oldest son has befriended a teenaged boy twice his age who is a little weird. And don’t even get her started on having a toddler when you’re in your late thirties. She just can’t keep up. Forget tired; she’s exhausted and feeling unfulfilled, dissatisfied and like a disappointment to everyone; her kids, her parents and most of all, herself.

To relieve her stress, Amy finds herself fantasizing about everything from the pool boy next door to finding out that her daughter was switched at birth. She can’t help her thoughts, but she figures, if they’re in her head, they can’t hurt anyone else, right? When Jason, a very sexy forty something year old single father moves in across the street, Amy finds her fantasy world has gone into overdrive. When Amy and her 13 year old daughter stumble upon the body of their neighbor, shot to death in her living room, Amy finds herself thrown together with Jason in the most unpredictable way. Amy finds herself bumbling around Jason, trying desperately to stop her fantasies and her underlying attraction towards him as this who done it mystery slowly unfolds. And Amy soon realizes, nobody is who she thinks they are…even Amy herself.

Holy crap! When I originally requested this book from Netgalley I was going off the cover and it looked like a young adult book and it is far from it. This book was so good and I would totally read more by this author in the near future.

Amy Maxwell feels like a horrible mother and wife but she is also thrown into the middle of a DEA sting op. Amy is a typical mom of four kids and an inattentive husband. The story walks you through the 8 mistakes that she makes in the current week(s) of the book. When it seems that everything is falling apart in her life something unexpected happens and things end up kind of perfectly.

There are all kinds of twists and turns in this book. The story itself is amazing. There were moments when Amy was in some sort of dream/trance state which is kind of confusing but besides some of those moments the story flows really well. I was expecting young adult and I got so much more than that. Heather is a fantastic author who keeps you entertained and wanting more the whole time you are reading.