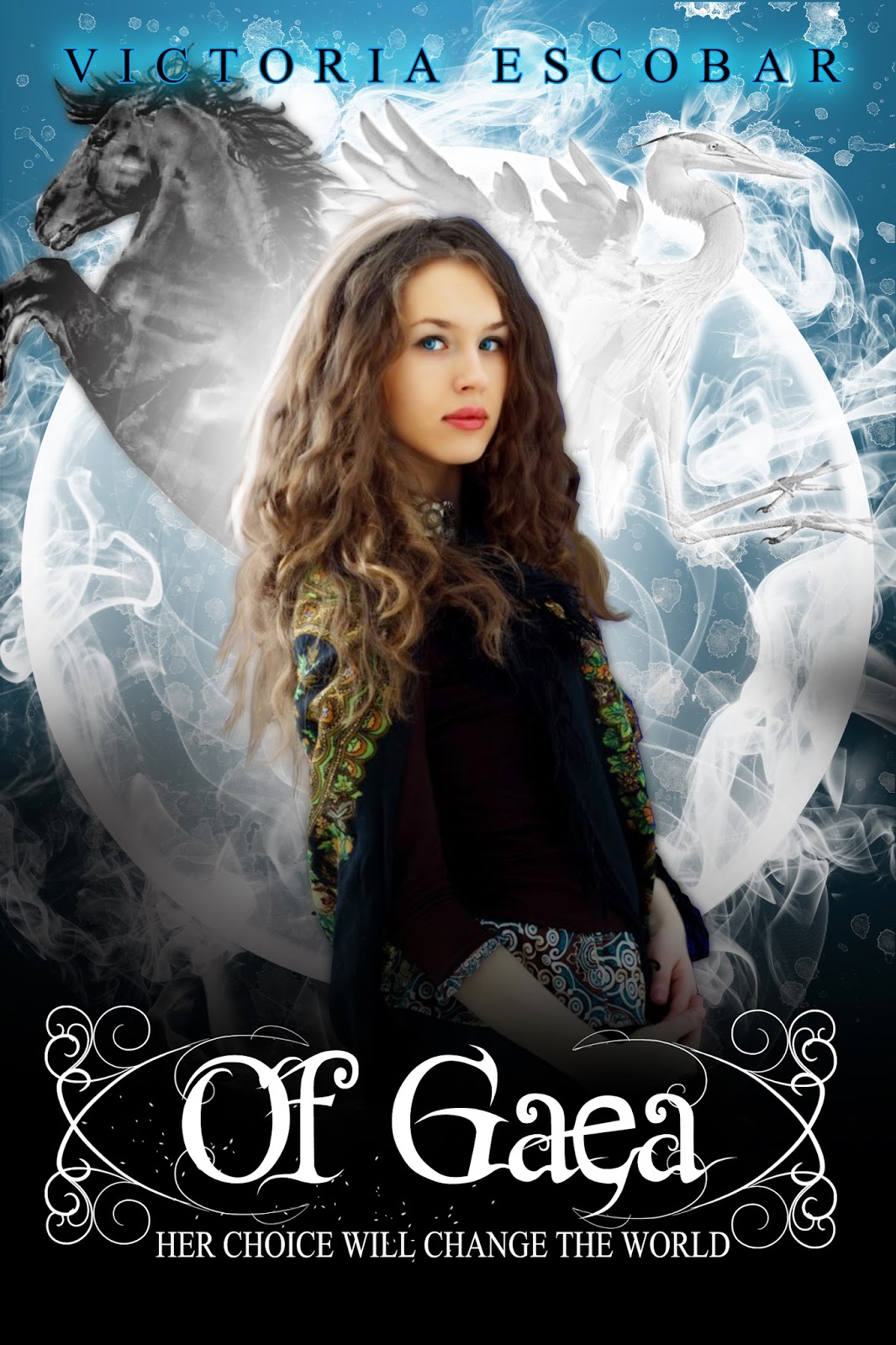 Of Gaea
Of Legacies #1
By- Victoria Escobar
Genre- YA Fantasy

Her choice will change the world.

She hated the wheelchair. Hated the way it made her feel less than what she was. Most of all she hated not being able to do all the things she used to. Ari had been a track and field star, an archery champion and an Eskrima pro. Now she was confined to a wheelchair slowly dying inside from its restraints.

Medical science wasn’t working. The tests, the drugs, the therapies were all useless and a waste of time. She was tired of wasting her time; she was tired of failure. It was time to look away from the obvious and try something unconventional.

Nothing was ever free and that included miracles. Abruptly, Ari finds herself tangled in a web of lies, questioning everything she’s ever known as truth. Never had she believed she’d be thrown headfirst into a world of good and evil, magic and Gods.

Trapped in the middle of a war she had never known existed both parties demanded her allegiance. Ari was a catalyst that could change all the rules of the Earth. But when the time comes to make a choice will she be strong enough to know right from wrong?

And here is an Excerpt from Of Gaea:

“Ghi, you came!” A woman practically attacked Ghita with her hug.

Ari only watched bemused, then melded into shock when the woman pulled away to look at her. There was no mistaking the woman for anyone other than Lyris. She was an identical twin... to Ghita.

“This must be Ariadne.” She glanced quickly over the wheelchair and then at Ari. “I’m so glad you came.”

Ari looked to her mother for help but Ghita was shaking hands and speaking to two people nearby. Ari looked back at Lyris. “Yes, I’m Ariadne. Please call me Ari.”

“Wonderful,” Lyris beamed at her. “Would you like to go for a walk? I would like a walk.”
“I…” Ari glanced over at her mother again who was still preoccupied. She wasn’t entirely certain it was a good idea being so far away from the responsible adults. Lyris’s face, however, didn’t leave any room for a gentle let down. “Sure, um, where do you walk?”

“Oh,” Lyris giggled childishly. “I’ll take you to my favorite place.” Before Ari could stop her Lyris was behind the wheelchair pushing. “Tell me all about you, Ariadne. I want to know everything.”

“But shouldn’t we tell Mom?” Ari began to swivel around when something sharp was press against the back of her neck.

“No, I don’t think so.” Lyris’s voice never lost its cheerful tone.

Ari swallowed nervously. Two thoughts swirled through her mind. The first: she was being held hostage by a crazy person. The second: she had broken her promise to Sasha. She doubted anyone would have foreseen her current situation though. Who could have predicted a crazy person smart enough to conceal a sharp object and hold a person in a wheelchair hostage?

“We’re going to play a game of hide and seek. If we’re crafty about it, they won’t find us for a good bit.” Lyris was still cheerful and the sharp object still pressed dangerously to the back of Ari’s neck. “Did you know there are a set of nerves back here that if I slice through all of them will render you dead? Interesting fact isn’t it?”

“Mom will worry about us. She loves us both very much.” Ari protested gently. Lyris was scarily cheerful, and Ari preferred that than whatever angry might look like. She definitely didn’t want to risk seeing firsthand what happened if Lyris’s composure was broken. If her aunt held a knife while smiling cheerfully, who’s to say she wouldn’t slit Ari’s throat in anger? 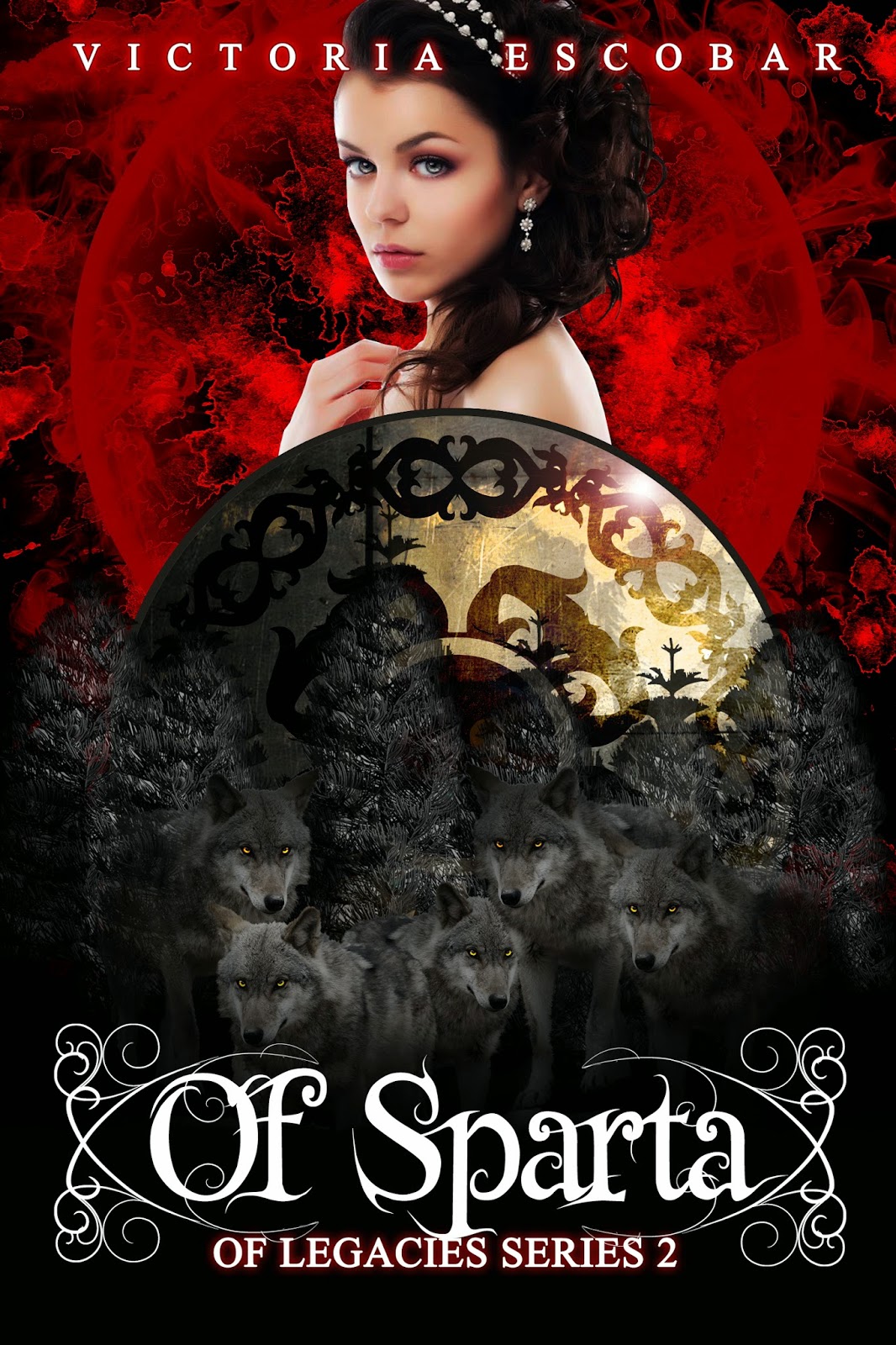 Of Sparta
Of Legacies #2
By- Victoria Escobar
Genre- YA Fantasy

She was the strongest of Gaea’s Servants. Miera had been trained from childhood to be Faithful always to the Goddess. She had been taught with Faith they would always be protected. She had never wavered from that course. She hadn’t counted on the consequences of that choice.

As Ariadne’s birthday draws closer darkness closes in on Sparta. Monsters, both Tainted and Pure alike, were vying for pieces of their island. Doubt and fear grew like pestilence. Death was unavoidable.

Sparta sat on the brink, but of what Miera wasn’t certain. There was no record, no precedence for her to consult. There were no living patrons of the Goddess to seek council from. She only had instinct and Faith. If she could not maintain the balance Sparta would fall before Gaea’s return.

How did the lost lead the people out of darkness?

And now an Excerpt from Of Sparta:

He pointed out the windows. Black smoke billowed towards the sky. “The corn is on fire. I was commanded to come fetch you before it reaches the cotton.”

“Go get the horses ready,” Miera gave an apologetic look to Sasha and Nasya. “I must go.”
“I go with you,” Thalia stepped to Miera’s side. “I have sworn it Miera.” She added before Miera could protest.

Miera nodded and turned to Sasha, “continue down this hall…”

“What is all this noise?” Leonidas strolled down the hall.

“Never mind.” Miera squeezed Sasha’s arm as she passed. To Leonidas she said, “I must go, Sasha needs to talk to you.”

She ran as fast as she could out to the waiting horses. A car might be faster in any other circumstance but depending on where the field was burning it wouldn’t have been convenient. Thalia boosted her up then took to her own mount and they raced from the South gate of the city.

The smoke was thick and blowing in their faces with the north wind as they got closer. There were people running towards and running away from the fire. Most of them were running away. But Miera saw the gleam of precious metals on arms and heads as they raced by. The Envoys and the Thaumaturges were trying to get there as well.

There was no visible fire. Smoke billowed out of a perfectly spherical circle the size of a football field. It wasn’t trying to spread. This was something else. Miera felt it a second too late.

“Ambush!” Miera wheeled her horse even as dozens of wolves howled and formed from the black smoke. Thalia jerked her horse between Miera and the black predators. Their gleaming red eyes were unnerving.

“Get out of here!” Thalia shouted at her drawing her swords.

“I’m not leaving you,” Miera replied even as the wolves lunged.

“In Gaea’s name!” Thalia caught two of them on her blades even as Miera called down lightning. The smoke still billowed and seemed to thicken making it impossible to see through. Even more impossible with them swirling around in it.

Miera heard the cries of the Envoys and Thaumaturges that had caught up with them and felt the draw on Gaea as their training kicked in and they fought back. For a brief moment it felt like they were winning. Even though the numbers were impossibly stacked.

Then the smoke parted for a second and Miera saw a man dressed all in black with billowing black hair and endless black eyes. Crows flew about him and Miera tried to count their number before the smoke closed again. She had counted enough for death. 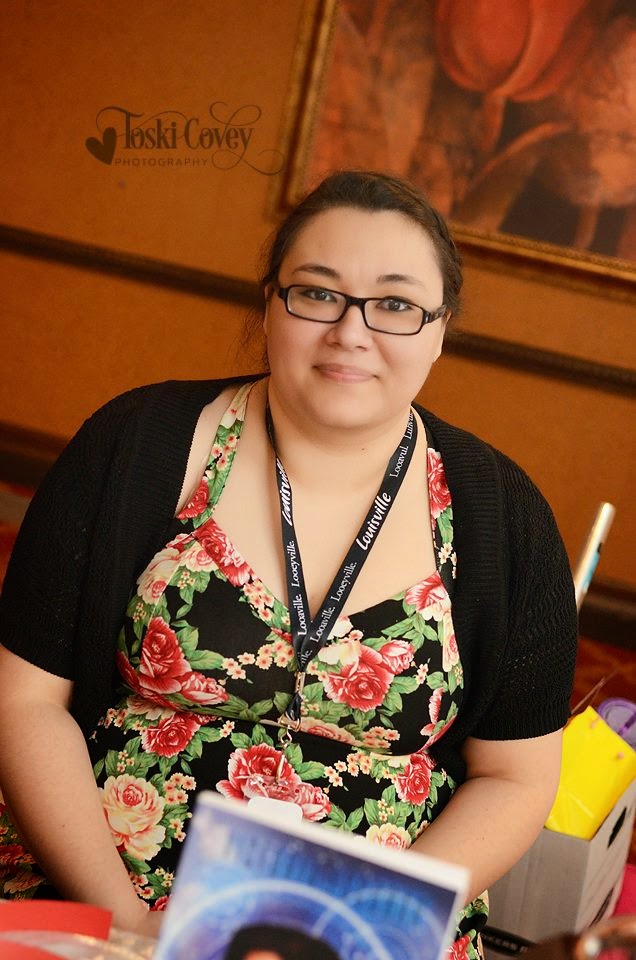 About the Author-
Born in Fort Lauderdale, Florida, but with the ability to claim eight states as home; Victoria Escobar writes fiction from her current home in New York. She writes whatever comes to mind and because of such has a variety of genres written including Young Adult, New Adult, Paranormal, Urban Fantasy, and Contemporary Fiction.

In spare time if not with family, and friends Victoria enjoys curling up with a book from a favorite author with music playing. If not reading or writing she spends time drawing, sketching, crocheting, or some other random art project. She enjoys staying busy, but most of all enjoys staying creative.