Dark Order of the Dragon Book # 2
By Sandra Bischoff

Christian Lancelot Du Lac was never one to take a situation seriously. Growing up he had always been the comedic relief to Jared Bonatelli's brooding nature. Now, just as The Dark Order welcomes Jared as its new Prince, Du Lac is informed that he must become a first in command the future King can truly rely on. When he repeatedly fails in his attempts to prove himself, Lance is thrown back in time to where his life began, Camelot. What he finds there is more than he could have bargained for.

Drawn to the forest surrounding Camelot, Lady Elizabeth Payne searches for something that seems just out of her reach. Tormented by a pair glowing eyes in the mist she steals away in the middle of the night to find their owner. Thieves, a wolf and the most infuriating savior she has ever met turn her simple world upside down. But it's the attraction she feels to the newcomer that truly takes her by surprise. Learning that he is Christian Du Lac, the long lost son of the First Knight himself peaks her curiosity even more.

Now on the cusp of meeting her betrothed for the first time, Elizabeth's heart has been claimed by another. But even a betrothal written in blood is no match for fate.

For Lance and Elizabeth, the odds are stacked against them. Their worlds are destined to remain forever apart. Can time heal all wounds or will the fates change their course and let the star crossed lovers find each other once again? 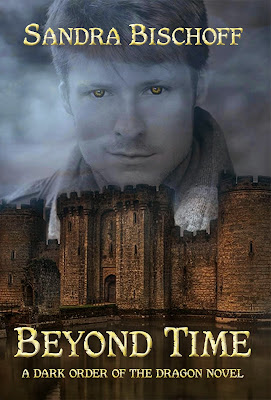 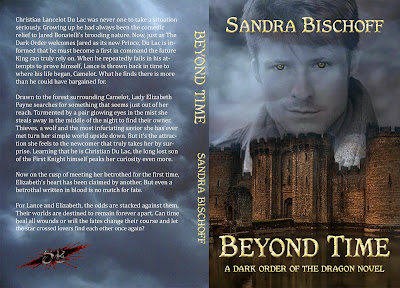 And here is an excerpt from Beyond Time:

A feral growl from the clearing ahead stopped him in his tracks.  “Son of a bitch, is this woman a danger magnet?”
Lance heard the rapid drum of her heartbeat.  She wasn’t far ahead, but she was scared to death. He readied his bow, arrow nocked, and crept closer. A large black wolf had her cornered. He paced not far from her toying with his prey. Its amber eyes glowed in the darkness. Lips curled back in a snarl. Lance saw her terrified gaze searching the brush around her, looking for him perhaps? He was the only one on her side at the moment. He could leave her for dead, revenge for the knife wound, but he wasn’t about to
do that. It wasn’t in him to leave a woman in danger, even danger she created for herself. He’d rather have her undying gratitude. If it got him laid, even better.
Maybe I am a dog. He chuckled to himself.
The wolf paced closer. She let out a strangled cry. Lance stood. Her gaze swept to him, relief bloomed in her eyes. He raised the bow at the same time the wolf lunged for her throat. His bowstring hummed as he let the arrow fly and hit its mark. The wolf dropped to the forest floor inches from her. The woman crumpled to the ground in tears.
Lance was careful as he approached her this time. He didn’t want a repeat performance of what happened earlier. Crouching next to her, he brushed the tangled ginger curls from her face. She lifted tear filled emerald eyes to him.
“Are you okay? He didn’t hurt you, did he?”
She shook her head and gazed at the carcass by her feet.  “Nay, I am unharmed, thanks to you.” Her eyes lifted once more to meet his. “How did you know I was in danger?”
“Cher, danger seems to follow you.” He laughed and held out a hand to her. “Let’s get you back to where you came from. Where exactly is that?”
“I’ll not say another word without thy name.”
She took his hand allowing him to pull her to her feet.
Lance bowed low over her hand, minding what Semiramis warned him earlier. “Christian Du Lac at your service.”
Her jaw fell. “Nay, you cannot be.”
“I can assure you, I am. I have been away on apprenticeship only to return home tonight. My father is awaiting my arrival as we speak.” His hand still held hers, and he swore a spark traveled between them. “Would you tell me yours? You know, so I can inform dear old dad who I rescued.”
“I am Lady Elizabeth Payne, niece to his Majesty King Arthur.”
Lance frowned. King Arthur’s niece? What the hell was she doing out here unescorted? “Why is there no guard with you? You shouldn’t be riding all over the woods with no one protecting you, especially at this hour.”
“You are just like the rest of them.” She stalked away. “I am perfectly capable of taking care of myself.”
“Yeah, you’re an ace at it. Thieves and a blood-thirsty wolf meant you no harm. I get it. You were going to bat your pretty green eyes at them and make them fall in love with you. Sure, then they wouldn’t kill you.” He scoffed. 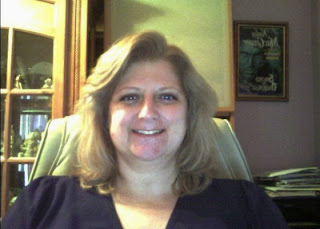 Sandra Bischoff lives in the historic town of Cornwall, NY with her extremely patient husband and teenage son, she affectionately calls the Demon. She is a Pharmacist by profession but found her true calling in a simple twist of fate. A friend approached her to write in a forum on a popular networking website. Over the next five years her passion had found its niche. She went on to compose a few poems and short stories which she would post on her homepage at the same networking site.

Her debut novel, Beyond the Sun was published April 2013 by Bayou Brew Publishing. She recently was named to Amazon's best seller list in the Fantasy/Epic category. Sandra's second book in this series entitled Beyond Time was released earlier this spring in time for the Romantic Times Convention in New Orleans where she was a featured author at the Book Fair.

She has since left Bayou Brew Publishing to embark on the next chapter of her writing career, Independent Publishing. As of this time she has re-released both books in e-book and paperback formats. They can be found on Amazon.com. Sandra is currently working on her third book in her Dark Order of the Dragon Series. Her hope is to have it ready for publication in early 2015.
Posted by Ashley at 9:25 AM