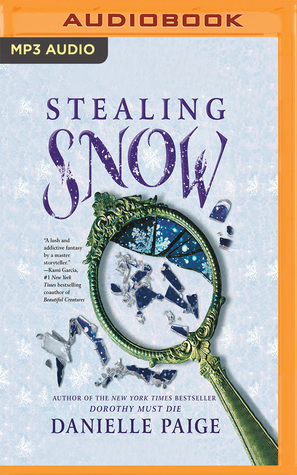 From Danielle Paige, the New York Times best-selling author of Dorothy Must Die, comes a reimagining of "The Snow Queen" fairy tale.

Seventeen-year-old Snow has spent the majority of her life within the walls of the Whittaker Institute, a high-security mental hospital in upstate New York. Deep down she knows she's not crazy and doesn't belong there. When she meets a mysterious, handsome new orderly and dreams about a strange twisted tree, she realizes she must escape and figure out who she really is.


Using her trusting friend, Bale, as a distraction, Snow breaks free and races into the nearby woods. Suddenly everything isn't what it seems, the line between reality and fantasy begins to blur, and she finds herself in icy Algid - her true home - with witches, thieves, and a strangely alluring boy named Kai, none of whom she's sure she can trust. As secret after secret is revealed, Snow discovers that she is on the run from a royal lineage she's destined to inherit, a father more powerful and ruthless than she could have imagined, and choices of the heart that could change the fate of everything...including Snow's return to the world she once knew.


This breathtaking first volume begins the story of how Snow becomes a villain, a queen, and ultimately a hero.

I listened to this in audio book format and it took me a while because I got halfway through the book and hit a reading slump where it was really hard for me to listen to any books!  I was able to pick right back up where I left off without skipping a beat.
While I enjoyed the plot and the characters immensely I did have some issues with a few other things.  It did seem to flow well as a story but the pace kind of lagged in the beginning.  Also I had issues listening for long periods of time because the narrators voice annoyed me.  I could only listen for 30 minute periods when I was in the car because of this.
This was my first book by Danielle Paige and I can truly say that I look forward to reading more because she really is a good author.  I have wanted to read her other series since I saw it on the shelf at the library but haven’t had the time as of yet.  Maybe I will try to grab them in audio book format.
4 stars
Posted by Ashley at 11:30 PM