A Highlander in Vegas...

A Highlander In Vegas
by Jennae Vale 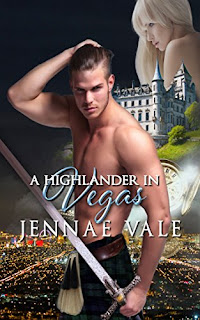 Braeden MacDonald believes he’s died and gone to a place his very wise Grannie called ‘the meadows.’  In fact, he’s actually been transported through time to present day Las Vegas, Nevada and the Grand Opening of The Albannach Hotel, where the strange sights and sounds have him wondering - has he arrived in heaven… or hell?

Tessa McTavish doesn’t believe she needs a bodyguard following her around day and night, but her father has insisted and abiding by his wishes she finds herself both intrigued and irritated by the tall, dark and handsome Scotsman her father has hired to do the job.

Dueling Las Vegas sorcerers, a charmed pocket watch and magick spells will either destroy the Albannach and the McTavish name, or save it, but only time and Braeden MacDonald will tell.

Was he in heaven… or hell? The uncomfortable heat and noise had him believing it was the latter, but a moment later he was shoved through a rotating door into the very cool interior of the castle. Were there castles in heaven? He stood wide-eyed and unsure of where to go, something that was foreign to him. Braeden had always been very sure of himself, but the wonder of all he saw stripped him of his confidence. He was happy to be away from the oppressive heat, but the crowds and noise still surrounded him, making it difficult to think.

“You must be here for the security job.” A soft, feminine voice startled him back to reality. A beautiful lass with flaxen hair stood before him. “I like your attention to detail,” she said as she waved a hand in front of him. He was sure he couldn’t help the dumbfounded expression on his face. “Nice costume, but if you plan on working here, you’ll need the McTavish plaid. Follow me.” She began to walk away and Braeden felt compelled to follow.

“Am I in heaven?” he asked, gaping at every extraordinary thing they passed. The lass gave him an appraising look back over her shoulder, before answering.

“Funny. For some people it’s heaven and for others it’s definitely hell.”

So heaven and hell were in the same place. He would never have guessed it. “Are ye an angel?”

“If you’re trying to score points with me, flattery will get you nowhere.” The lass seemed to be getting irritated with him, but why? And what exactly did she mean ‘scoring points.’

“I’m sorry, lass. ’Tis only that I’m new here and I’m unfamiliar with yer customs. If this is heaven, then it would make sense that ye be an angel.” He tipped his head, furrowing his brow in question.

“Right. Have you just arrived from Scotland?” She continued walking and Braeden had to admit he enjoyed the way she moved in her unusual clothing and shoes. Her long blonde locks cascaded halfway down her back. She turned to look at him and he was taken aback by her beautiful sapphire eyes.

“Aye. I have. Are there those who are here from other places?” He glanced quickly around at the others moving about the castle.

The lass sighed. “Of course. There are people here from all over the world.” She nodded and smiled at people as they passed. She must be a woman of some importance here, as the others seemed to show her much deference and appeared eager for her to notice them.

“I see.” He didn’t really see, but he could tell she was losing patience with him.“ Where are we going?”
“I’m taking you to see my father. He’ll want to meet you.” Her father? If they were in heaven, then that would mean… “Would that be our heavenly father?”

Tessa snickered at his question. “Some people around here might think that, but he doesn’t like being thought of that way. He wants to be considered another employee like the rest of us.”

“Employee?” So many confusing words entering his already addled brain.

“I know. It’s kind of crazy. He is the boss after all and he owns this place, but he knows what it’s like to work at every single job in the casino and he empathizes with those who work here. They love him for it. You’ll see.”

Braeden’s head was spinning. He really had no idea what was going on, but he assumed this boss would tell him.

They came to a wall of doors and the lass stopped and nodded to others who were waiting. “I’m sorry, I forgot to introduce myself. I’m Tessa McTavish.” She held out her hand to him, and he looked at it and then into her lovely face. She smiled reassuringly and he took her hand, bringing it to his lips.


“I be Braeden MacDonald. I’m pleased to make yer acquaintance.”

Jennae Vale is an author of romance with a touch of magic. Her Scottish Medieval time travel series The Thistle & Hive, Books One through Four, is available in print and ebook versions from Amazon. The first book in her new series, The Mackalls of Dunnet Head has been released, with more to come throughout 2016.

Jennae started life in Massachusetts as part of a large extended Irish and Italian family of imaginative story tellers, but now lives in the San Francisco Bay Area with her husband, her dog, two cats and four chickens. Storytelling is her passion, but Jennae also loves to quilt,  cook, read and indulge in her crafting obsession when she’s not writing.

You can find Jennae at